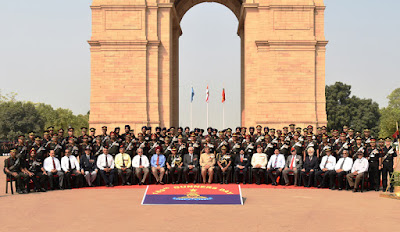 Regiment of Artillery, the second largest Arm of the Indian Army celebrated 189th Gunners’ Day on 28 September 2016. Wreath Laying Ceremony was held at Amar Jawan Jyoti by Lt Gen PR Shankar, Director General of Artillery and Senior Colonel Commandant, decorated war veterans, senior veteran officers and serving officers. The day has a special significance in the annals of the history of the Regiment of Artillery as the first Indian Artillery Unit, 5 (Bombay) Mountain Battery equipped with 2.5 inch Guns, was raised on this momentous day in 1827.

The Regiment proved its mettle during the operations of 1947-48, 1962, 1965, 1971 Wars. More recently, the role of Artillery, in the victory of Kargil Conflict, is well etched in the Indian Military History. The regiment of Artillery has also undertaken major steps towards modernisation, both in terms of equipment and support systems under “Make in India” initiative of the Government of India.
On the occasion of the 189th Gunners Day, all ranks of Regiment of Artillery resolved to re-dedicate themselves to the service of the Army and the Nation.