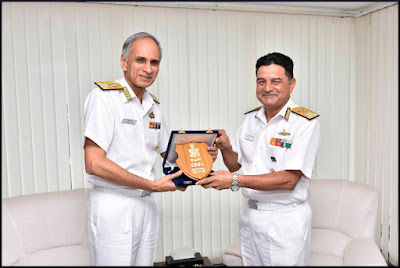 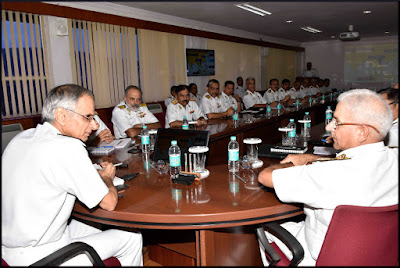 The Flag Officer called on Vice Admiral HCS Bisht, Flag Officer Commanding-in-Chief at the Headquarters, Eastern Naval Command and was briefed on the activities of the Command.  The VCNS is also scheduled to visit all major Naval establishments in Visakhapatnam prior to his departure on Saturday, 06 August 2016.

In his career spanning nearly 36 years, Vice Admiral Karambir Singh has commanded an Indian Coast Guard Ship, a Naval Missile Corvette as well as Guided Missile Destroyers.  On promotion to flag rank, the Admiral was appointed as Chief of Staff, Eastern Naval Command.  His other important flag appointments include Chief of Staff of the Tri Services Unified Command at Andaman & Nicobar Islands and as the Flag Officer Maharashtra and Gujarat Naval Area (FOMAG).

In the rank of Vice Admiral, he has been the Director General Project Seabird, in-charge of infrastructure development of the Navy’s expansive and modern base at Karwar, followed by a tenure as the Deputy Chief of Naval Staff prior to taking over as VCNS.