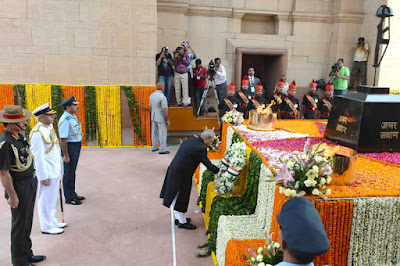 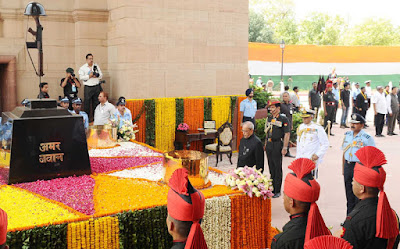 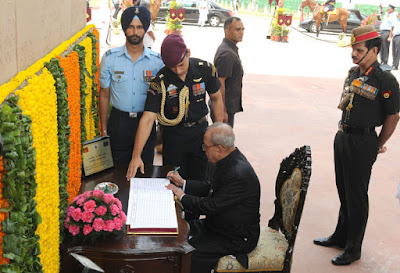 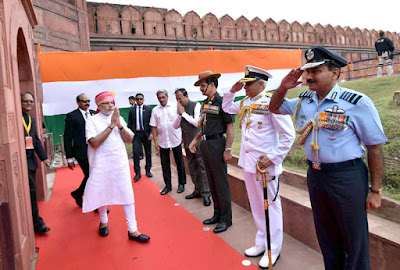 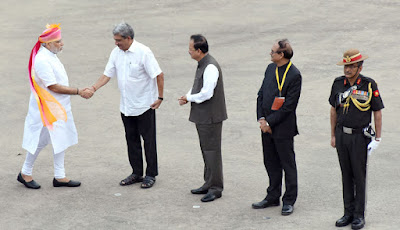 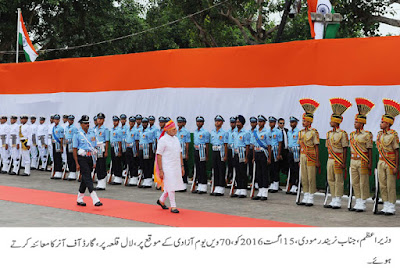 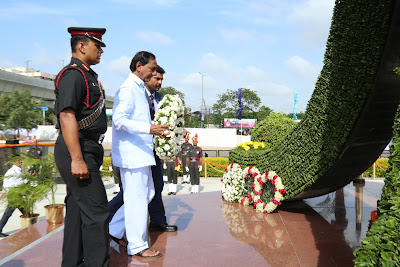 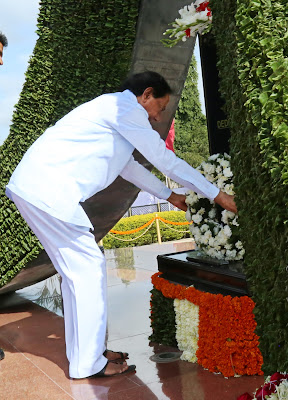 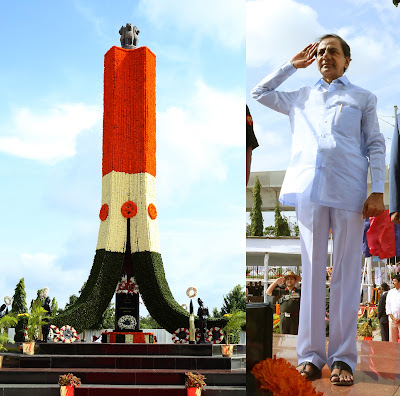 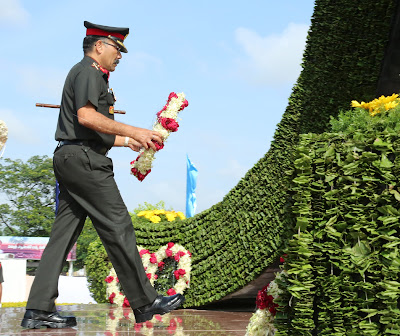 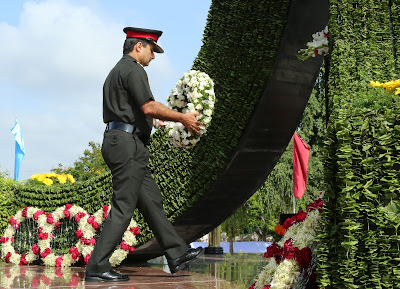 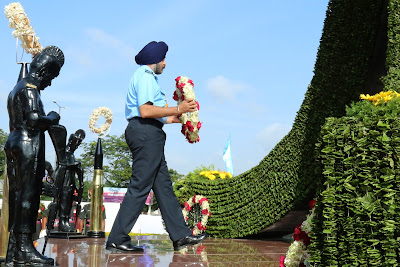 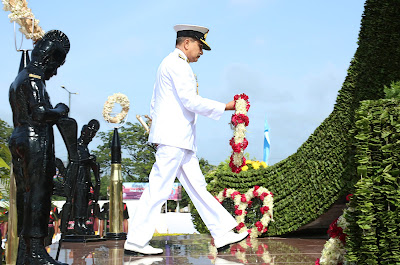 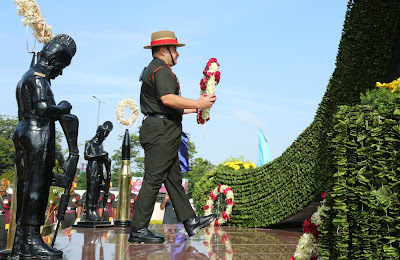 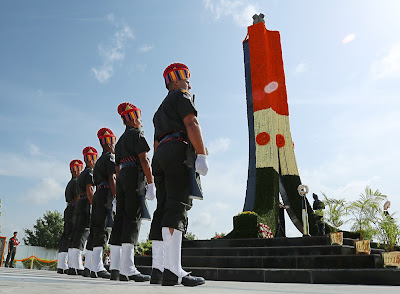 
Prime Minister Narendra Modi addressed the nation from the ramparts of the Red Fort in New Delhi on the occasion of 70th Independence Day today. Following are the brief highlights of the speech:

1. Today on this special day, I convey my greetings to 125 crore Indians & the Indian community living overseas. May this energy guide the nation to scale newer heights of progress in the years to come

2. We remember Mahatma Gandhi, Sardar Patel, Pandit Nehru, countless people who sacrificed their lives so that we attained Swarajya.

3. It is true that India faces a lot of problems, but we have the capacity to find solutions.

4. Today, more than Karya, I want to talk about Karya Sanskriti of the Government

6. It is our responsibility to convert our Swaraj into Suraaj, which can not be done without sacrifice, discipline and staunch resolution 7. Today I will be speaking not just of policy but vision. Not just the speed of work, but actual experience of progress

9. We want to change the situation where people are scared of income tax authorities, particularly among middle class families

10. Two crore people apply for passports in the country. Even poor people get passport in one or two weeks

11. In the past any businessman who wanted to invest in this country had to spend more than six months just registering his business. However, with this government we have simplified the procedure to an extent that in last July itself, 900 such registrations have taken place.

12. Interviews for more than 9,000 posts in Group C and D jobs have been abolished.

13. In the the last 70 years people's expectations have changed. Announcement of policies and budget doesn't convince them. We have to show what has been achieved on the ground

15. One nation, one grid and one price- we have worked on this.

16. Renewable energy is a focus area for us.

17. In the field of solar power we have seen a growth of 116 per cent. It is unprecedented.

20. We must break through our predilection towards pessimism. If we do that, it gives us energy. To get 21 crore people into the network of institutional credit is one such thing that people thought was impossible. But it happened.

21. Out of 18,000 villages, more than 10,000 villages have been electrified and I have been told they are with us, watching this celebration of Independence Day.

22. Just at 3 hour distance from Delhi is a village in Hathras, that took 70 years to get electricity.

23. Govt has made LED bulbs available at Rs. 50 per bulb, says the Prime Minister.

24. When things like the coming together of Iran, Afghanistan and India come together for Chabahar port, then one can see the impossible becoming possible.

25. We haven't allowed inflation to go beyond 6 per cent. There were two years of successive drought in the country. Production of pulses became a concerns, but despite all that we tried our best to control the situation and compared to previous governments, I and my government did not allow the cost of a poor man's thaali (plate) to be unaffordable.

26. As we celebrate the 350th anniversary of Guru Gobind Singhji I remember what he said: "He who hasn't served others, how can his hands be considered holy?" I say our farmers do such work and have sown 1.5 times the pulses that were sown earlier, despite the discouragement of successive droughts.

27. Our scientists have created 131 types of high yielding variety seeds, so that we maximise output. I congratulate them. The shortage of fertiliser is like something out of a bad dream of the past. That shortage is history.

28. To empty government coffers has been a tradition of past governments, I have tried to keep away from such a temptation. For me more than what the world thinks of the government, what the image of the country is, is important. Substance over symbolism. Empowerment over entitlement. The nation is more important than the party.

29. Government is continuity and if there are good points in the works done by them, we, with bowed heads will continue that work. I take meetings over PRAGATI systems, where we oversee 118 such programmes launched by previous governments but had run aground. 270 projects worth Rs. 10 lakh crore had been stuck. This was criminal negligence and we have tried to move them forward.

30. When there is clarity in policy, clarity in intent, decisions are unhesitating. Every year, when it came to Uttar Pradesh, a common story was the arrears due to sugarcane farmers. Today, I can say 95 per cent of payments have been done. Under Ujjwala Yojana, we have 50 lakh households of smoke-free kitchens.

31. We will remain relevant and be able to lead the global economy only if we come up to global standards. In the last few days you must have seen how rating agencies have appreciated our moves on ease of doing business.

32. Ramanujacharya used to say that we must look at everyone with the same gaze, never humiliate anyone. This was said by Ambedkar, Gandhi too. If society practices this discrimination it will break society. If discrimination is entrenched, our determination to fight it and our sensitivity to fighting it should be that much higher. Just economic progress is not enough, social equity is more important. We have to fight social evils together.

33. GST will give strength to our economy and all parties are to be thanked for its passage.

34. This govt does not believe in postponing things. We have fulfilled our promise of one rank one pension. We have released all files relating to Netaji Subhash Chandra Bose. That was another promise we had made.

35. Unity in diversity is our greatest strength. Our cultural tradition of respect for others, and assimilation is the reason why our civilisation has persisted.

36. Violence has no place in our country. This country will not tolerate terrorism and Maoism.

37. I tell those who believe in human values, to weigh in the scale of humanity, when innocent children were massacred in a school in Peshawar. In India, every school was weeping, there were tears in the eyes of every parliamentarian. That was a reflection of our human value, but look at the other side which glorifies terrorists

38. I say to our neighbours, Let's fight poverty, by fighting our own people we will destroy ourselves, only by fighting poverty together will we prosper

40. We have decided to raise pensions for freedom fighters by 20 per cent.

41. The Government will bear the health-care expenditure upto Rs 1 lakh per annum for the BPL families.

42. When we speak of freedom fighters, a few are mentioned far more than others. Our Adivasi brothers fought valiantly largely unsung, many have heard of Birsa Munda but few others. In the next few days, it is our intention to record the history of such Adivasi freedom fighters in the areas of their origin on a museum.

43. One society, one mission, one goal 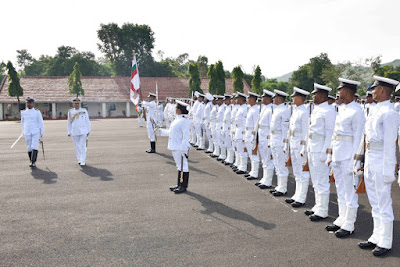 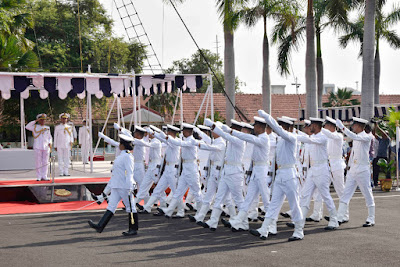 On the occasion of 70th Independence Day, a Ceremonial Parade was held at the Eastern Naval Command (ENC) at Naval Base parade ground on 15 Aug 16. Vice Admiral HCS Bisht AVSM ADC, Flag Officer Commanding-in-Chief, Eastern Naval Command took the salute. Vice Admiral Atul Kumar Jain, Chief of Staff, ENC, was the Conducting Officer of the Parade. The Flag Officer Commanding-in-Chief was given a ceremonial salute on arrival by the Parade Commander, Commander Dinesh Kumar Singh, Executive Officer, INS Rana. The C-in-C later inspected a 50 men Armed Guard and reviewed the platoons of Naval personnel drawn from various ships and establishments,  Defence Security Corps and Sea Cadet Corps. The parade concluded with singing of the National Anthem by all present.

The Parade was attended by all Flag Officers, Commanding Officers of various ships and establishments at Visakhapatnam and a number of service and civilian personnel and their families. The Commander-in-Chief conveyed good wishes and greetings to all personnel on parade and to their families on the occasion of the 70th Independence Day. He complemented the men on Parade for their immaculate turn-out and smart drill. Speaking on the occasion, Vice Admiral Bisht reiterated the need to maintain 24X7 vigil on physical security of naval assets and also on cyber security as World is witnessing increased incidents of terrorist attacks. He further emphasized that the primary responsibility of everyone in ENC in ensuring that the ships, submarines and aircraft remain combat ready at all times. The C-in-C underscored the need to maintain the Command Humanitarian Aid and Disaster Relief (HADR) Response Team every-ready to be deployed in rescue and relief operations during natural disasters.

In a parallel event at the “Victory at Sea” War Memorial on the Beach Road this morning, Vice Admiral Dinesh Mukund Deshpande, Director General Naval Projects (Visakhapatnam) placed a floral wreath and paid tributes to Martyrs who made the supreme sacrifice in defence of the Nation. A two minute silence was observed as a mark of respect to the Martyrs. 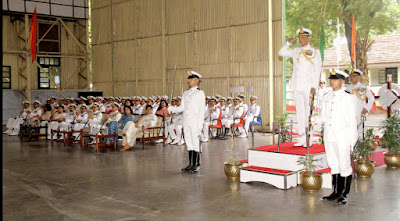 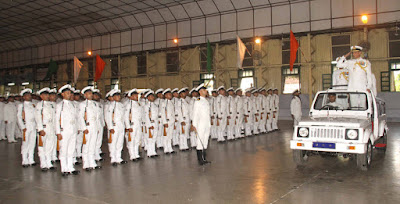 While addressing the parade he reminded all present, that the fruits of independence that we were enjoying today, are the result of great sacrifices made by our freedom fighters, which ensured that India was freed of centuries of subjugation. He also reiterated the fact that preservation of the hard earned freedom for the last seventy years was no mean task particularly in the unstable security environment and was primarily due to the martyrs who laid their lives both uniformed as well as civilian. The Flag officer also highlighted the role of the armed forces in protecting the independence of the country saying that the country’s armed forces were greatly respected the world over.


16 Platoons including 4 Armed Platoons attended the Parade. The President’s Colours which was presented to the Southern Naval Command by the then President Late Shri Giani Zail Singh was also paraded accompanied by a 50 men Guard of Honour. The Parade was commanded by Commander SN Samle. Rear Admiral S K Grewal, Flag Officer Sea Training (FOST), conducted the Parade. Southern Naval Command band was in attendance. All the Naval ships based at Kochi were dressed overall to mark the festive occasion.