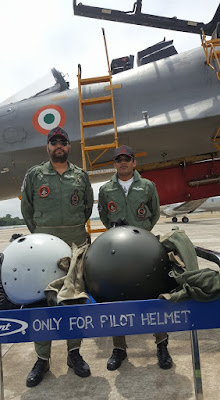 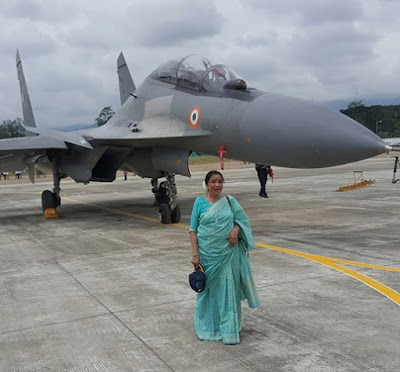 A flypast by a formation of three Sukhoi-30 MKI Air Dominance Fighter aircraft, that took off from one of the forward EAC airbases was a highlight of the event. This was followed by a Su-30MKI also landing at the ALG. The touchdown by a frontline fighter jet of the IAF at the ALG is a 'historic first' in the predominantly hilly state of Arunachal Pradesh, which has several ALGs at varying altitudes.

Earlier, the AOC-in-C and other senior officials who arrived at the ALG by an An-32 aircraft from Shillong and were received by the Chief Construction Engineer (North East Project). Also, the Hon'ble Union Minister had arrived in a BSF helicopter. Thus it was a rare sight to see many different types of aircraft at this forward airfield.

The new runway surface and other infrastructure built are similar to the other upgraded ALGs that have been inaugurated in the recent months. Replete with facilities such as aprons for ground manouevering, Air Traffic Control Tower, perimeter road and a security wall, the ALG will facilitate operations of fixed wing aircraft as well as helicopters of both civil and military operators.

The ALG at Pasighat will facilitate air connectivity with rest of the country and give a huge fillip to tourism in the state of Arunachal Pradesh. The pristine and picturesque landscape of Pasighat, on the banks of river Siang, will become accessible to rest of the world. The unspoilt natural beauty of the area is sure to attract many a tourist, which in turn will usher in a new round of prosperity and happiness for the local population . AAI is in the process of setting up a civil terminal, the construction of which has yet to commence. Now the need of the hour is for all agencies to get together and make it happen.

The ALG at Pasighat was taken over by the IAF in February2010. Previously, it was small strip that was partly paved, partly grassy, and reinforced with perforated steel plates. It was utilized in the past for air maintenance sorties and casualty evacuation by the IAF. Commercial helicopter operations were also being undertaken from the helipads that existed earlier.

It may be recalled that following a MoU between Government of Arunachal Pradesh and Ministry of Defence in June 2009, the IAF had embarked on an ambitious reconstruction plan to upgrade eight ALGs, including infrastructure development at an overall outlay of nearly Rs. 1,000 Crore.

The ALGs a Walong, Ziro, Along, Mechuka and Pasighat have since been upgraded and are operational now. Two ALGs at Tuting and Tawang are expected to be ready by the year end, while the ALG at Vijaynagar would undertake for reconstruction as soon as the road connectivity between Miao and Vijaynagar is restored.

The Union Minister of State (Independent Charge), Commerce & Industry, Smt. Nirmala Sitharaman and Minister of State for Home Affairs Shri Kiren Rijiju visited Tawang, a border area of Arunachal Pradesh on August 17-18, 2016 as a part of the campaign launched to celebrate the 70th year of Independence. Smt. Sitharaman tied rakhis to Jawans of Forces deployed at the Sashastra Seema Bal (SSB) Border Out Post (BOP) at Lumla, one of one of the remotest BOPs on India-China Border, on the occasion of Raksha Bandhan yesterday.

Raksha Bandhan was celebrated in a function at the picturesque location of Dolma Lakhang where Smt. Sitharaman tied Rakhis to the Army and Paramilitary Jawans. Addressing the function, she emphasized the importance of Tawang as one of the most important places from both strategic and religious point of view and assured of all cooperation from her Ministry for development of the region. She termed her experience of Tawang as an enriching one and expressed her gratefulness to the Prime Minister Shri Narendra Modi for his unique initiative to honour the soldiers who face all type of difficulties to secure our borders and protect us. In her morale boosting address for men in uniform she spoke of her visit to Tawang War Memorial, terming it as an emotional one and thanked the forces for their umpteen sacrifices for the cause of nation. Further, assuring of her cooperation in all the matters related to the development of the area she said that interest of Arunachal Pradesh is a priority and that the Central government is fully committed for the development of the region.

Shri Rijiju apprised the gathering about the plans chalked out by the government to mark the 70th year of Independence and said that the same is being done to pay tribute to the martyrs of Indian Freedom Struggle and also to boost the morale of the forces and contact the masses residing in the border areas. He reiterated the steps being taken by the Union government for development of the region. He also assured restoration of damaged roads and improving connectivity wherever required apart from taking up the issue of the restoration of damages caused in the landslides.

Later Shri Rijiju, along with the legendary singer Ms. Asha Bhosle, visited Bomdila, Arunachal Pradesh yesterday and celebrated the Raksha Bandhan festival with the jawans of the Indian paramilitary forces and the Army, which is a part of the 70th year of Independence celebrations.

Ms. Asha Bhosle expressed her happiness on visiting this beautiful town in western part of Arunachal Pradesh and thanked Shri Rijiju for providing this opportunity to her for interacting with the members of the Forces in the border area. Shri Rijiju appreciated the tremendous sacrifices made by the members of the Indian Armed Forces towards the safety and security of the nation. He also thanked Ms. Asha Bhosle for coming all the way to motivate the jawans.

The Government of India is commemorating the 70th year of Independence in a big way and a special 15-day celebratory campaign called “Azadi-70 celebrations” has been launched from 9th to 23rd August, 2016 throughout the country. As a part of this initiative, a musical programme was organized last evening at Buddha Stadium at Bomdila. The personnel from SSB, ITBP, BRO and Army, apart from the general public, attended in huge numbers. The main aim of this programme was to acknowledge the great contribution that our Forces Personnel are making in securing our borders, raise their morale and also provide some entertainment to them.