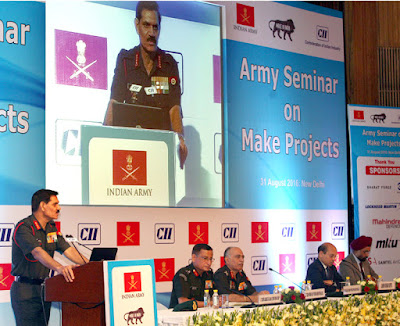 General Dalbir Singh.  PVSM.  UYSM,  AVSM,  VSM,  ADC,  the COAS formally  announced   establishment    of the  Army  Design   Bureau  today during   an  Army  Seminar  on Make Projects organized in partnership with the Confederation of Indian Industry (CII)  in New   Delhi.  The    Secretary  Defence  Production      Mr   A  K  Gupta, Secretary Defence Production was the Guest of Honour  at the event   which   was  attended by  a  large   number of  dignitaries    and  senior representatives     of   Indian     Industry,    Academia    and   leading     research agencies.     The  COAS also  launched  the 'Make  in India Army  Website' which   was hosted live  during  the inaugural  session of the Seminar.

In his opening address Mr Rajiinder Singh Bhatia, Chairman, CII Land Systems Sub-Committee applauded the Army’s initiatives to reach out to industry for Make projects.  He also highlighted that while several programmes with large value where Acceptance of Necessity had been accorded, actual contracts are still far away.  Mr Bhatia echoed industry’s sentiments to see early conversion of these AONs into contracts during the next 3 to 6 months, so that results could be seen in the next two to three years.

He also emphasized that the Ministry of Defence can make successful use of MAKE projects in import substitution which needs to be accelerated as private industry has time and again proved that they have the requisite technologies, technical competence and capabilities to deliver the solutions. He opined that these are the low hanging fruits which the Ministry of Defence can start work on immediately. With increasing levels of import substitution, India will be closer to its goal of self-reliance.

Mr Singh also highlighted the need for Government to handhold the industry, especially MSMEs, and facilitate them to actively participate in the defence procurement programmes.

Mr A K Gupta, Secretary Defence Production spoke about the initiatives taken by MoD during the last two years to facilitate larger participation of the Indian defence industry in meeting the requirements of the Indian Armed Forces.  He also expressed satisfaction that the Army Design Bureau has finally been setup to be a repository of all technological information of Army’s war fighting assets and also act as a catalyst and facilitator for participation of industry, academia, R&D organisations to fulfill “dream of self-reliance”.

In the  run  up to  the  establishment   of  Army  Design  Bureau,    the Indian   Army undertook   series of  Army -  Industry -  Academia   interactions since   January  this  year.     Lt Gen   Subrata  Saha,   UYSM,   YSM,   VSM**, DCOAS  (P&S),    and  his team  of senior   officers  have  been  carrying   out extensive   interactions    with   a  view   to  promoting   awareness  on  Army's modernization     needs,    discovering    capabilities    of   the   Industry   and encouraging   long  term  research  in   the  academia   at  various   regional industrial   hubs  across  the  country.     20 such  interactive  sessions    have been  carried  out till date.    Industry captains  of major defence  industries, MSMEs,   Start  ups  have  participated  in these  sessions.   In addition,   the team  has carried  out interactions  with a number  of leading  Institutes  like llTs  at  Delhi,    Bombay,   Madras  and  Gandhinagar   and  PSG  Institute   of Technology,   Coimbatore.   These  events  provide  an exclusive  opportunity to industry  and academia  representatives  to understand  the requirements and interact with  the army to seek clarifications  directly  from the user.  The Indian Army  is soon publishing  a comprehensive   compendium  giving   out specific    problem    definitrons.    which  shall  help  the  R&D  fraternity  in developing  indigenous solutions   for the Army's  modernization  needs

In   order to streamline  the procurement process further,  the Army has also initiated a number of other steps to include structural changes in the procurement organisations and issue of compendium of revised SOPs in  line with the OPP 2016

Following  the formal  announcement of establishment of the Army Design  Bureau and launch of the Website, a detailed deliberation on the Army's   Make  Projects was  carried out  in the  second session   of the Seminar.     The Army has identified ten projects under 'Make'  category for manufacturing  by  domestic   defence  industry.   These  projects  were uploaded on  MoD websites  about two months back for information of industry and the research agencies working in the field.  These projects include   125   mm  Smooth  Bore  Barrel  with  Gun  Article,   improved ammunition for T-72 and T-90 tanks,  1000 HP engines for T-72,  Individual Under  Water     Breathing   Apparatus,   Environment  Control  Unit  and Auxiliary Power Units for T-90 tanks Advanced Pilotless Target Aircrafts, Maneuverable Expendable Aerial Targets,  Trtacked Light Dozers,  Assault Track Way and Modern Aircraft Refueling Pump. Sources have revealed that the Indian Army is considering more projects to be taken up in Make category, for which the preliminary process is already on.

While  appreciating the recent initiatives of the Army, the Industry and  Academia  have  pledged their  whole  hearted  support to  facilitate 'Make in India'  vision of the Government and promote Indian Army's quest for Modernisation through lndigenisation.