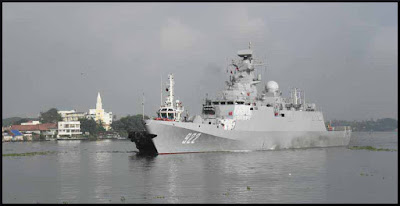 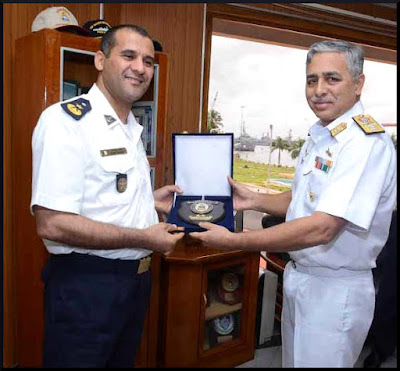 Algerian Naval Ship (ANS) Ezzadjer, a corvette class of ship, is visiting Kochi from 02 to 05 Aug 16. On 02 Aug 16, Commander Chalabi  Ahcene, Commanding Officer,  ANS Ezzadjer accompanied by Captain Chouchane Mohamed EI-Mouldi, the ‘Mission Commander’, called on Rear Admiral RB Pandit, the Chief of Staff, Southern Naval Command. Various interactions between the ship and the Southern Naval Command have been planned during the visit.

Earlier, ANS Adhaffer and EL Fateh belonging to the same class of ships had visited Kochi for logistic support in Sep 15 and Feb 16 respectively. ANS Ezzadjer is enroute to Jeddah and is planned to depart Kochi on 05 Aug 16.

At Kochi, a friendly football match was played between Indian Navy and Algerian Navy team on 02 Aug 16. During their stay, the Algerian Navy personnel would be visiting places of cultural interest in the city. The ship has a crew of 118 personnel.