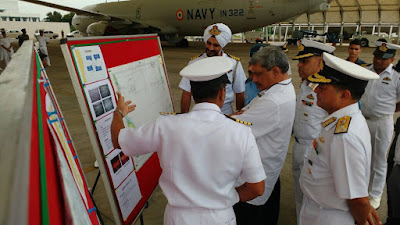 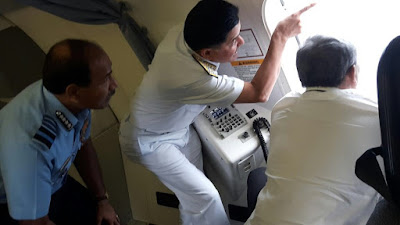 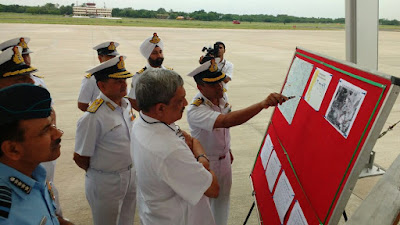 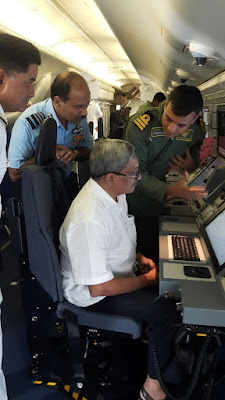 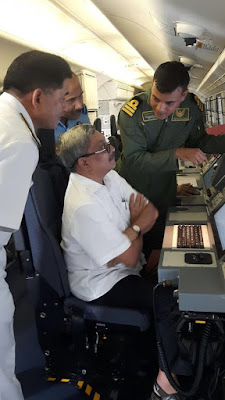 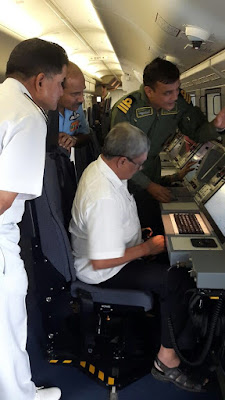 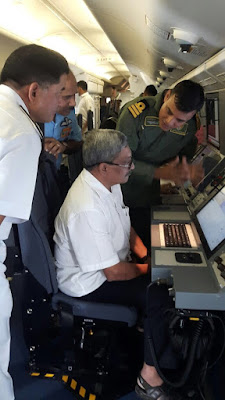 Raksha Mantri, Shri Manohar Parrikar personally reviewed the ongoing search operations initiated to locate the missing Indian Air Force AN-32 aircraft during his visit to INS Rajali, the Naval Air Station at Arakkonam this morning. The Raksha Mantri was briefed on the search operations undertaken in the last 24 hours and utilization of assets from the Navy, Air Force and the Indian Coast Guard. The Rasksha Mantri directed that if need arises more resources be diverted for the SAR operations. Raksha Mantri also reviewed the situation on ground as well as while flying over the area of operations in a P8 i Long Range Maritime Patrol Aircraft.

He was apprised of the difficult condition under which the operations are being undertaken in the last 24 hours. The state of the sea is 3 to 4 and is very choppy with thick monsoon clouds in the area making the search effort quite challenging. Raksha Mantri has directed that the operations be continued unhindered till further orders.

As of now a massive search operation is in progress braving prevalent monsoon weather conditions and poor visibility wherein IAF, Indian Navy and Indian Coast Guard have pooled in all available resources to look for any possible sign of the aircraft in this vast swath of Bay of Bengal between Chennai and Port Blair.

IAF has deployed two C-130 aircraft equipped with Electro-optical and Infra-Red sensors. Indian Navy P8i aircraft equipped with Synthetic Aperture Radar along with Dorniers are also taking part in this operation. Indian Navy has deployed 13 ships in the search area and is being assisted by six ships of Indian Coast Guard and merchant vessels in the area. Indian Navy has also deployed one submarine for the task. The Maritime Rescue and Coordination Center at Chennai has been coordinating round the clock surveillance towards search effort along with Southern Air Command of IAF, Indian Navy and Indian Coast Guard.

Out of 29 people who were on-board six were crew members along with eleven IAF personnel, two from Indian Army and one person from Indian Coast Guard. Eight civilians working with Indian Navy along with one sailor from Indian Navy was also travelling in the aircraft. Raksha Manti has directed all commanders to be in touch with the families of the missing service personnel. Air Chief Marshal Arup Raha, Chief of Air Staff and Vice Admiral HCS Bisht, Flag Officer Commanding-in-Chief, Eastern Naval Command were also present during the review.

The Hon’ble Raksha Mantri Shri Manohar Parrikar, accompanied by Air Chief Marshal Arup Raha, Chief of the Air Staff, and Vice Admiral HCS Bisht, Flag Officer Commanding-in-Chief of the Eastern Naval Command, undertook a sortie today from Naval Air Station Rajali at Arakkonam onboard an Indian Naval P-8I Maritime Reconnaissance aircraft for reviewing the Search and Rescue (SAR) operations for the missing AN-32 aircraft of the IAF. During the sortie that lasted nearly two haurs, he witnessed coordinated efforts involving ships and aircraft, including helicopter operations from the Navy’s LPD INS Jalashwa. He directed that maximum resources be pressed into service so as to undertake effective SAR. He was briefed about the challenges of undertaking SAR under monsoon conditions with heavy rain, cloud cover, rough sea condition and most importantly depths of over 3500 metres in the area. He was also briefed about future plans involving additional ships and a submarine that were heading for the area to join in the SAR operations.

Apart from aspects related to the optimum deployment of resources for SAR operations, the Hon’ble RM enquired about the families of missing Service and civilian personnel. He was assured that constant liaison was being maintained with all families, and that all possible help was being rendered to them.