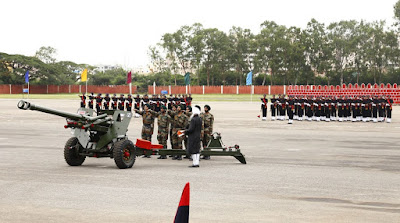 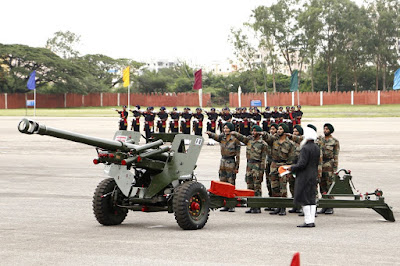 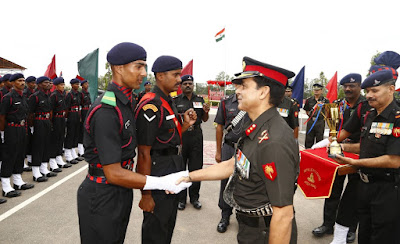 Golconda located Parade Ground witnessed the passing out of  250 new Gunners  of Artillery Centre Hyderabad attaining the status of Combatant Soldiers at an impressive Passing out Parade held here today. These motivated and spirited young soldiers earned their status of Gunners after thirty four weeks strenuous training. Years old traditions of the Regiment of Artillery was explained by the Education Junior Commissioned Officers (JCOs) before the commencement of the ceremony.   Major General SK Panigrahi, Chief of Staff, Dakshin Bharat Area was the Reviewing Officer on the occasion. The new Gunners displayed tremendous enthusiasm, vigor and zeal by putting up an excellent show, marching to the tunes of Artillery Centre Military band.

Congratulating the new Gunners on the successful completion of their training at the Centre, the Reviewing Officer emphasized the need of imbibing the glorious motto of The Regiment of Artillery, “SARVATRA IZZAT O IQBAL” to achieve professional competence and traditional qualities of a real Gunner. To keep pace with the latest technological developments, the Reviewing Officer laid emphasis on the importance of keeping in touch with the latest developments.

The General Officer praised the standard of training and also congratulated the parents and the families of the Recruit Gunners on the successful completion of training of their wards. Reviewing Officer also gave away medals for the outstanding Recruits and ‘Guarav Padak’ to the parents. 3 Training/MT Regiment was awarded for Best marching Contingent of the parade.

Major General SK Panigrahi is an alumnus of National Defence Academy Kharakwasla. He was commissioned from the Indian Military Academy, Deharadun, in Dec 1982 into the Regiment of Artillery.