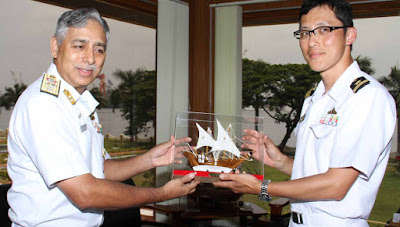 Japanese Maritime Self Defence Force (JMSDF) Ships Uraga & Takashima are on a visit to Kochi from from 22-24 Mar 16. Cdr Shunichiro Kachi and Lt Masanori Nakai are the Commanding officers of Uraga & Takshima respectively. Various professional and informal interactions of the ship’s crew with Southern Naval Command have been planned during their stay at Kochi.

On 22 Mar 16, the Commanding Officers of JMSDF Ships accompanied by Captain Toshihiro Takaiwa, Commander, Minesweeper Division 51 and Capt Shusuke Takahashi, Resident Defence Attache (DA), Embassy of Japan, New Delhi called on the Chief of Staff, Southern Naval Command. Other planned interactions include exchange of visits by specialist officers and men from both the navies with Indian Navy personnel visiting the Japanese Naval ships and vice versa. The Japanese Ships’ crew would also be visiting places of interest during the stay in Kochi. On departure, JMSDF ships along with Indian naval ships Sunayna and Sharda will take part in a joint exercise ‘PASSEX’ off Kochi.

Exchange of Mementoes between JMSDF and Indian Navy

The Ships had last visited Port Klang (Malaysia) and are en route to Bahrain.