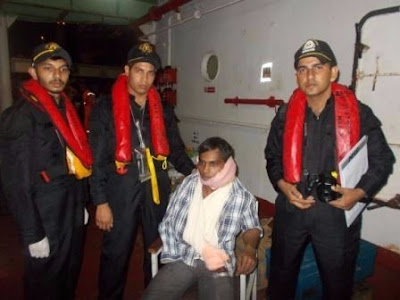 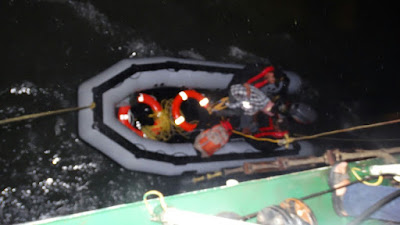 In yet another life saving mission. Indian Coast Guard undertook medical evacuation in the dark hours from an SCI ship MV Goa off Mumbai at. 0300  Hrs.

The Maritime Rescue Coordination Centre, MRCC Mumbai received a telephonic message at  1927 hrs on April 06, 2016 from the master of the SCI vessel MV Goa stating immediate medical evacuation of Binood Kumar who was profusely bleeding from ear and hand with first degree burn on right wrist with blisters as he got struck in pantry bulkhead.  24 years old Binood Kumar is fourth engineer of the Merchant Vessel. The vessel was about 22 NM (Approximately 40 kms) North West of Mumbai.

Considering the patient’s condition, the mission was undertaken in shortest possible time by diverting the Indian Coast Guard ship, Agrim, which was on patrol off Mumbai, to provide assistance to the wounded person.  ICGS Agrim, a Coast Guard patrol vessel reached MV Goa in the dark hours and after examining the patient, evacuated him from MV to the ICG Ship. The patient was brought to Mumbai harbour and was handed over to the civil boat Arbas at about 0240 AM todate 07 April for  hospitalisation. MRCC Mumbai coordinated the mission, giving update to the Ship as well as arrangements ashore through the Ship's agents.

The patient was  later transferred to the Shah clinic, marine lines for further medical care and his condition is now stable.