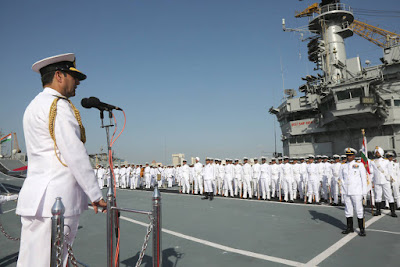 Naval Investiture Ceremony, an annual event for the Indian Navy, was held on board Indian Naval Ship Viraat at Naval Dockyard Mumbai on 13 Apr 16.  Admiral RK Dhowan, Chief of the Naval Staff, conferred Gallantry and non Gallantry Awards  awards to their recipients on behalf of the President of India at a ceremonial parade.

Speaking on the occasion, Admiral Dhowan complemented the awardees for their dedication and for bringing laurels to the Indian Navy by their actions and service. He said that the emphasis of the Navy today is on continuous training so that the professional standards are maintained in the force.  Admiral said that the economic development of the country is anchored on its independence at sea. He said that men and women of the Navy remain alert round the clock at sea so that the citizens of the country can lead peaceful lives on land. While complimenting the families of the awardees for their unstinting support he said that the Officers and men of the Indian Navy cannot discharge their duty at sea with worries about the well being of their families. He apprised the personnel on parade that the Indian Navy has built 6000 houses as a part of Married Accommodation Project (MAP) Phase I and II. To ease the housing problems in various Naval Stations proposals for 12000 houses are also being raised. Of these, 4000 dwellings are proposed to be built in Mumbai for improving the availability to officers and men here.

Indian Navy played a vital role in evacuation of over 3000 people including Indian diaspora and foreign nationals of 30 countries from war-torn Yemen during Operation Rahat in Apr 2015. Navy has also contributed immensely to the crisis situation of water shortage at Maldives by Operation Neer and Operation Leher during the cyclone Hudhud at Vishakapatinam. For their meticulous planning, conduct and successful accomplishment of various missions such as Operation Rahat, Operation  Neer and other search and rescue operations Rear Adm B Dasgupta, Chief Staff Officer Operations and Capt Alok Anand, Director Naval Operations, were awarded the Yudh Seva Medal. For their service, bravery and valor at war-torn Yemen during the Operation Rahat, while serving onboard Indian Naval Ships Mumbai, Tarkash and Sumitra, Inder Singh Ojha MCPOII RC1, Satya Ranjan Mandal, MCPOII ASWI(S) and Keshar Singh Chaudhary, PO RCI have been conferred with Yudh Seva Medal. For their Gallant action and impeccable execution of operations at Yemen, Capt Rajesh Dhankar, Commanding Officer, INS Mumbai and Captain Pradeep Singh, Commanding Officer, INS Tarkash have been conferred with Nao Sena Medal (Gallantry).

Navy also plays an important role in rescue operations of ships and aircraft in distress situations at sea. Cdr Sanjay Shukla, a helicopter pilot, Anil Kumar POA(ACMD) and Thongbam Prakash Singh NAI(ACMD) both divers have been honoured with Nao Sena Medal (Gallantary) for rescue of 19 men from MV Jindal Kamakshi and MV Coastal Pride which were in distress off the Mumbai coast in most challenging weather conditions. Cdr Ashok Kumar has been awarded the Nao Sena Medal (Gallantary) for recovery of bodies and salvage of wreckage of Dornier IN-240 that had ditched off Karwar at a depth of 58 Meters.

The Naval Investiture Ceremony was also attended by families of the award winners, Flag Officers and Commanding Officers of ships and submarines and their families.