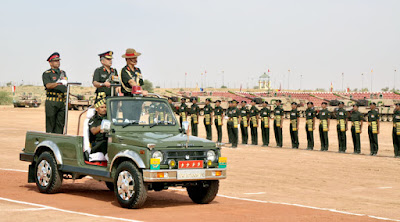 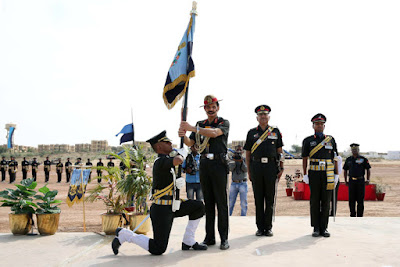 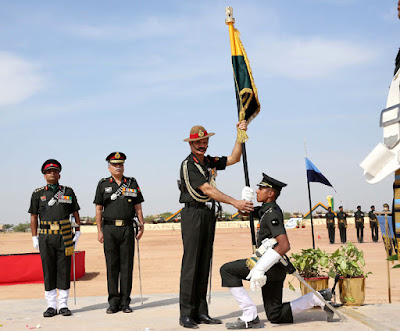 Jaisalmer Military Station witnessed a historic moment on Wednesday, 16 Mar 2016, when General Dalbir Singh, Chief of the Army Staff, on behalf of the Hon’ble President of India, Shri Pranab Mukherjee, presented the ‘President’s Standards’ to 75 Armoured Regiment and 43 Armoured Regiment. Both the Regiments conducted a mounted parade on the indigenous Arjun tanks with clockwork precision and immaculate coordination in consonance with the highest traditions of the Indian Army. To commemorate this historic event, the Chief of Army Staff also released a “Special Cover”.

In his address, the Chief of the Army Staff congratulated both Regiments and brought out that “This veneration (President's Standard) will add to your responsibility and certainly I believe that you all will go beyond your capabilities to execute every single task that would be assigned to your Regiments.”  While highlighting the achievements of the two regiments, Gen Dalbir Singh said that ‘Enriched history of 43 and 75 Armoured Regiment is overwhelmed with true valour, bravery and professional competence, which befits the highest traditions of Indian Army.’ The Chief further added that ‘With industrious and determined soldiers from all over India, with distinct caste and religion, both Regiments reflect the spirit of unity within.’

75 Armoured Regiment was raised in 1972 under the command of Lieutenant Colonel Vijai Singh (Later Lieutenant General). The squadrons of 75 Armoured Regiment participated in the 1971 Indo-Pak war to include the Battle of Laungewala. 75 Armoured Regiment has a unique distinction of being the only unit of Indian Army to be raised on captured Pakistani Territory ‘Sakna’ (26 kilometres inside Pakistan) on 12th March, 1972. The Regiment Colours are Canary Yellow over Bottle Green and the Regiment’s motto is “SAHASAM VIJAYATE” which means,“COURAGE WINS”.

This honour has been bestowed upon 75 Armoured Regiment and 43 Armoured Regiment in recognition of their dedicated and meritorious service since their raising. The Regiments are among the frontline Units of Indian Armoured Corps. The hard work and sacrifices made by the valiant soldiers of both the Regiments have been recognized by various awards and medals.

The Standard Presentation ceremony also brought to the fore, the awe-inspiring armoured might of the Indian Army showcasing 51 Main Battle Tanks, thereby displaying the Nation’s technological prowess. The grand ceremony was held in the backdrop of the recently developed Jaisalmer War Museum which displays the valour and sacrifices by the Indian Armed Forces. The occasion was graced by many senior serving and retired military officers and civil dignitaries including Lieutenant General Bipin Rawat, General Officer Commanding-in-Chief, Southern Command.

These 'standard' presentations have become too common these days.

Waiting for coverage of defence Expo 2016.