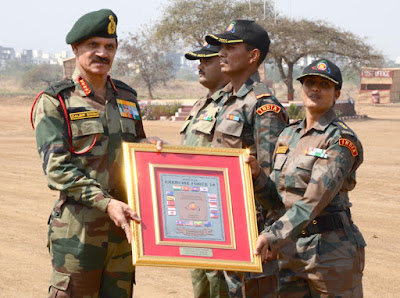 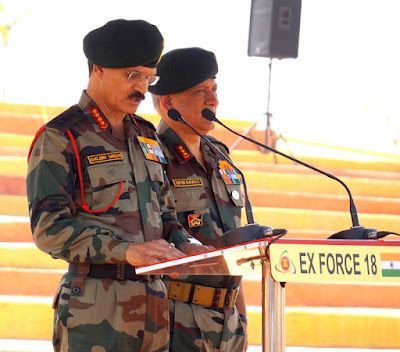 “Exercise Force -18”, the largest ground forces multinational field training exercise on ‘Humanitarian Mine Action and Peacekeeping Operations’ culminated at Pune with a closing ceremony which was presided over by General Dalbir Singh, Chief of Army Staff. The week long exercise witnessed participation of over 300 foreign participants and observers from ASEAN Plus countries.

The closing ceremony began with marching in of contingents from the participating ASEAN Plus countries followed by National Anthem and ASEAN Anthem. The Chief of Army Staff handed over plaques to all contingent commanders of foreign armies and also gave away Award of Excellence to the best performers in the exercise. Excerpts of closing address by Chief of Army Staff are contained below.

“This exercise in India is a watershed event in the history of ASEAN Defence Ministers meeting (ADMM). It has showcased perfect harmony amongst the ASEAN Plus Nations in the field of Humanitarian Mine Action and Peace Keeping Operations.”

“The activities conceived and planned under the ADMM Plus umbrella are of strategic importance to all of us. They further the all encompassing aim for the peace, stability and development of the region. The forum provides an equal and beneficial playground for all the participants, harmonizing relations, building capacities and facilitating meaningful interaction among the regional players.”

“Since its establishment, the ADMM Plus has made remarkable progress. The forum has enabled alignment of views to collectively address the humanitarian    and security challenges that confront us. It provides valuable platform for our armed forces to work together, in a constructive and meaningful manner to enhance peace and security of the region.”

“Sharing the responsibilities for removing  Explosive Remnants of War (ERW) is a humanitarian matter and a topic of mutual concern for our region and the international community.”

“The Exercise Force Eighteen gave all of us an excellent platform to introspect Country specific practices in Peacekeeping Operations, and evolve common understanding towards handling complex situations.”
Senior dignitaries from the participating countries including Deputy Chief of General Staff Vietnam Army, Senior Lieutenant General Vo Van Tuan also attended the closing ceremony. The event was then followed by speech by co-chairs from Vietnam, South Korea and India.