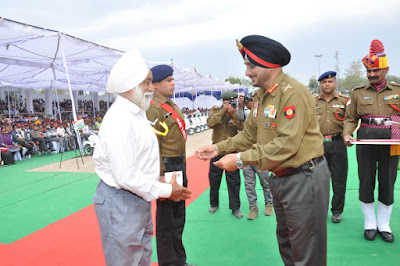 A Mega ESM Rally was organized by Pathankot Sub Area under the aegis of Rising Star Corps on 5th March 2016.  The rally was attended by approximately 6500 Veterans and 100 Veer Naris hailing from Jammu, Samba, Kathua, Pathankot and Kangra districts.  The rally was addressed by Lt Gen KJ Singh, GOC-in-C Western Command who reassured the Veterans and War Widows that they shall always remain inseparable members of the Armed Forces fraternity.

The rally was held in close coordination with the State Administration and Rajya Sainik Boards.  The focus of the rally was to resolve anomalies in disbursement of pension, land and legal cases being confronted by the Veterans and War Widows.  A number of stalls from various welfare agencies and organisations of the army and civil administration were set up at the venue. A medical team, fully equipped with modern equipment and medicines, was also in place.  An ‘Employment Fair’ for advising kith and kin of Veterans and War Widows on employment avenues was another attraction.

The rally was a major step forward for ameliorating the day to day problems of the Veterans and Veer Naris.  It gave a platform to the War Widows to express their concerns directly to the concerned officials. The Western Army Commander presented mobility equipment to handicapped veterans and besides honouring the war widows, he also felicitated gallantry award winners among the veterans.