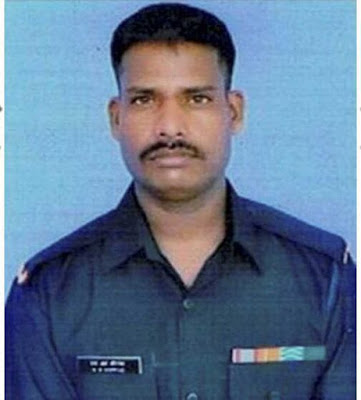 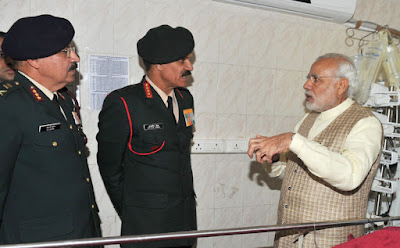 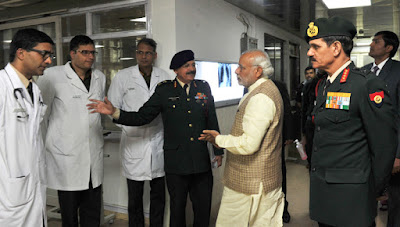 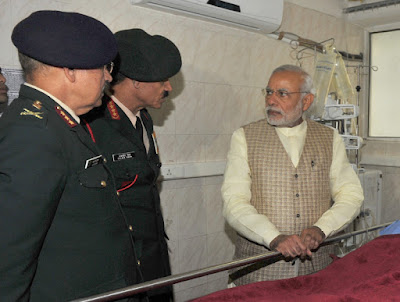 “L/Nk Hanamanthappa K of 19 MADRAS, was buried under 35 ft of ice and snow at 20500 ft for five days since the avalanche at Siachen on 03 Feb 16. He was rescued from the site on 08 Feb 16. On recovery, he was found to be conscious but drowsy and disoriented. He was severely dehydrated, hypothermic, hypoxic, hypoglycemic and in shock. He was immediately resuscitated by the doctors at the site, who had been there for the past five days in the hope of a survivor.

He was treated with warm intravenous fluids, humidified warm oxygen and passive external re warming. He was flown out from the site on 09 Feb 16 by helicopter along with a Medical Specialist to the Siachen base camp, from where he was brought to the Thois air base. He was then transferred to Delhi by a fixed wing aircraft of the IAF along with a Critical Care Specialist of the IAF and Medical Specialist from the Siachen Base Camp.

He is currently comatose and continues to be in shock with low blood pressure. He has pneumonia and his investigations have revealed liver and kidney dysfunction. Fortunately there was no cold exposure related frost bite or bony injuries to him. He is being treated by a team of intensivists, neurologist, nephrologist, endocrinologist and surgeons. He has been treated with fluids, drugs to bring up his blood pressure and antibiotics. He has been placed on a ventilator to protect his airway and lungs in view of his comatose state. He remains extremely critical and is expected to have a stormy course in the next 24 to 48 hrs due to the complications caused by re warming and establishment of blood flow to the cold parts of the body”.

General Dalbir Singh, COAS visited Army Hospital Research and Referral (R&R) today and commended the brave heart for his indomitable mental robustness and his refusal to give in to harsh elements of nature. He also conveyed best wishes on behalf of all ranks of the Army for his early and complete recovery.

The President of India, Shri Pranab Mukherjee has applauded the indomitable spirit of Lance Naik Hanumanthappa who survived in the avalanche on Siachen Glacier of February 3, 2016.

In his message to General Dalbir Singh, Chief of the Army Staff, the President said, “I am happy to know that Lance Naik Hanumanthappa has survived the avalanche on Siachen Glacier of February 3, 2016. I applaud his indomitable spirit and ability to endure adverse conditions.

Lance Naik Hanumanthappa’s will power and courage to fight all odds is truly an example to all others.

I join the people of our country in praying for his early and speedy recovery”.

"No words are enough to describe the endurance and indomitable spirit of Lance Naik Hanumanthappa. He is an outstanding soldier," the Prime Minister said.

nice information,thanks for sharing such type of informationNeurological specialist