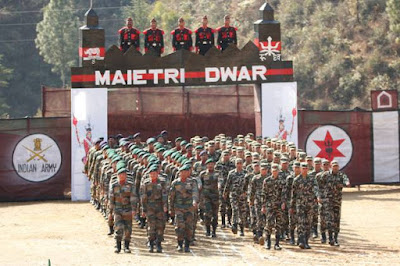 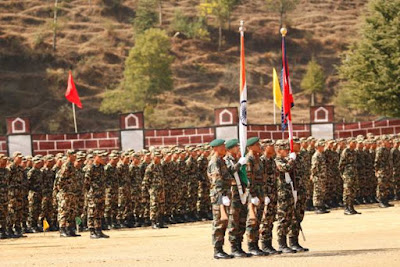 The 14 day Indo-Nepal Combined Military Exercise Surya Kiran IX at general area, Pithoragarh commenced on 08 February 2016 and will culminate on 21 February 2016. A combined Ceremonial Parade was held by both the participating contingents. The Nepal Army is being represented by officers and troops of the elite Shree Rudra Dhoj Battalion while an Infantry Battalion is participating on behalf of Indian Army. The Combined Battalion Level Exercise is being conducted under the aegis of Panchshul Brigade of Central Command.

This is the Ninth Indo-Nepal Combined exercise and during the next 14 days of combined training, emphasis would be laid on upgradation of tactical and practical skills by sharing each others experiences and also on enhancing interoperability in Jungle Warfare and Counter Terrorism operations in mountain terrain. The role and importance of Armed Forces in disaster management in both the countries has assumed increasing significance in recent years. Focus will also be laid on Humanitarian Aid and Disaster Relief Operations which also includes medical and aviation aspects.

Brig Sanjay Sharma of Headquarter Central Command was present during the opening ceremony and interacted with the soldiers of both the contingents. In the opening address, he emphasised that both the armies have a lot to learn from each other especially in our approach towards handling the modern day challenges of addressing terrorism and also in disaster management as it has been one of the most important challenges for both countries after the recent calamities. Senior Nepalese Army officials are also likely to attend the combined exercise alongwith their Indian Counterparts during the validation phase of the exercise.