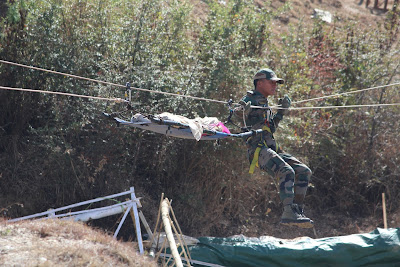 The Ninth Indo-Nepal Combined Battalion level Military Training Exercise SURYA KIRAN is being conducted at Pithoragarh from 08 February to 21 February 2016 under the aegis of Panchshul Brigade of Central Command. During the exercise, an Infantry battalion each from Indian Army and the Nepalese Army would be training together and sharing their experiences of Counter Terrorism operations and Jungle Warfare in mountain terrain.

The Surya Kiran series of exercises is a bi-annual event which is conducted alternatively in Nepal and India. The aim of this combined training exercise is to enhance inter-operability between the Indian and the Nepalese Army units in Jungle Warfare and Counter Terrorism operations in mountainous terrain. The training will also focus on Humanitarian Aid and Disaster Relief including medical and aviation support. Both the Armies will stand to benefit mutually from shared experiences.

The combined training, mutual interaction and sharing of experiences between both the countries shall further strengthen the historical military and strategic ties, giving further fillip to the bilateral relations and existing strong bonding between both countries.