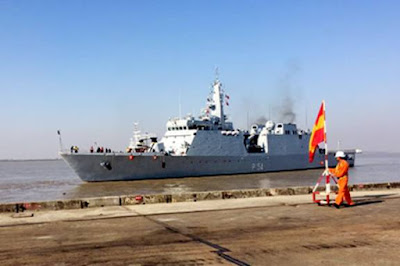 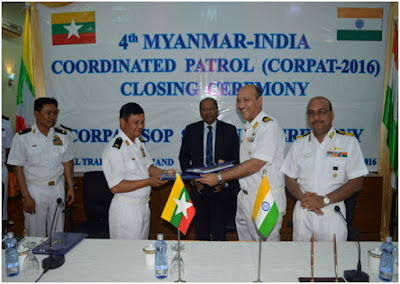 As part of the ongoing India-Myanmar defence relations, Navies of the two countries have conducted Coordinated Patrols along the Maritime boundary since 2013. Taking it forward, the Fourth Edition of the India-Myanmar Coordinated Patrol (IMCOR) was successfully undertaken from February 13 to 16, 2016 along the International Maritime Boundary Line (IMBL) in the Andaman Sea. Indian Navy Ships Saryu and Bitra along with Union of Myanmar Ships Aung Zeya and FAC 563 participated in the 4th IMCOR. Cmde Girish Garg, Naval Component Commander from the Tri-Service HQs in Port Blair was embarked onboard INS Saryu.

During the Closing Ceremony of 4th IMCOR, the Standard Operating Procedure (SOP) for IMCOR was also signed between Indian Navy and Myanmar Navy. Cmde Atul Anand VSM from Indian Navy and Cmde Aung Zaw Hlaing from Myanmar Navy signed the document in the presence of H.E Gautam Mukhopadhaya, the Ambassador of India to Myanmar. This is only the third country with which India has signed a formal agreement for maritime coordinated patrols and reflects growing naval interaction between India and Myanmar. The signing of the SOP is a significant achievement and will facilitate smooth conduct of coordinated patrols between two friendly neighbours that share a long maritime boundary in the strategically significant Andaman Sea and Bay of Bengal.