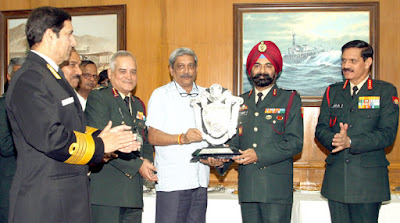 The Defence Minister Shri Manohar Parrikar presented the Raksha Mantri’s Trophy and citation for the Best and Second Best Service Hospital in the Armed Forces Medical Services (AFMS) here today. The trophy for the Best Service Hospital went to Command Hospital (Eastern Command), Kolkata, which was received by its Commandant Major General TS Ahluwalia. The trophy for the Second Best Hospital was presented to INHS Asvini, Mumbai, which was received by its Commandant Surgeon Rear Admiral AA Pawar.

Speaking on the occasion, the Defence Minister praised the yeoman service being rendered by the AFMS over the years both in war and peace. He complimented all the members of Command Hospital (Eastern Command), Kolkata, INHS Asvini, Mumbai and the entire AFMS for their excellent work in provisioning of contemporary and comprehensive healthcare.

The Director General AFMS and Senior Colonel Commandant Lt Gen BK Chopra in his opening remarks highlighted the modernisation programme of the Medical Services and reassured that the AFMS is fully prepared to meet any challenge.

The Raksha Mantri’s Trophy was instituted in 1989 to create a healthy competition among the Command Hospitals of the Army and its equivalent hospitals in the Navy and Air Force. The Best and Second Best Hospital are adjudged on the basis of a number of objective criteria by a Committee headed by Director General Health Services (Armed Forces). The Joint Secretary (O/N), Ministry of Defence is also a member of the Committee.

The function was attended by all the three Service Chiefs, Defence Secretary and other senior officers from the Services and the Ministry of Defence.