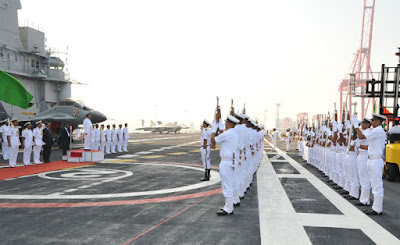 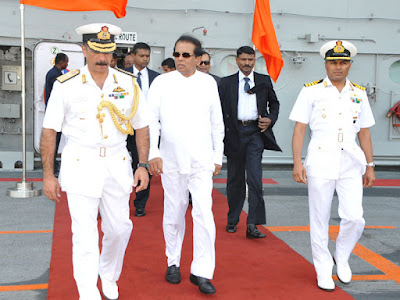 His Excellency, Maithripala Sirisena, the Hon’ble President of Sri Lanka visited INS Vikramaditya this morning. He was received onboard by Rear Admiral Ranveet Singh, NM, Flag Officer Commanding, Western Fleet and Captain Krishna Swaminathan, Commanding Officer of the ship. His Excellency Shri YK Sinha, High Commissioner of India to Sri Lanka and Vice Admiral Ravindra C Wijegunaratne, WV, RWP & Bar, RSP, VSV, USP, ndc, psn, Commander of the Sri Lanka Navy were also present. On his arrival onboard, the Hon’ble President was presented a 50-menGuard of Honour and was received with the playing of Sri Lanka and Indian national anthems by the Indian Navy band. He was then introduced to the ship’s officers.

This visit is very significant since it marks many firsts. It was not only the first visit of His Excellency, the President of Sri Lanka to a foreign warship after assuming office in January 2015, but also the first Head of State visit to the Indian Navy’s biggest warship and aircraft carrier, INS Vikramaditya. The fact that this visit of the ship to Colombo was the first ever foreign port being visited by the ship after being inducted into the Indian Navy makes the visit of the President onboard even more remarkable.

His Excellency, the President walked around the ship and was shown various aviation facilities onboard. He evinced keen interest in the functioning of the ship and her various aircraft. The President stated that he was very happy and honoured to be the first Head of State to visit the Indian Navy’s Flagship and state-of-the art aircraft carrier. The President signed the Visitors Book on completion of the visit.

India and Sri Lanka share a very cordial multi-dimensional relationship that is both diverse and historic. The Indian Navy and the Sri Lanka Navy also share a deep and multi layered relationship, as also a history of strong bilateral engagement. This visit of the President of Sri Lanka, who is not only the Commander-in-Chief of the Sri Lanka defence forces, but is also the current Defence Minister of Sri Lanka - to INS Vikramaditya is reflection of the strong bonds the two nations and navies have fostered between them over the years.