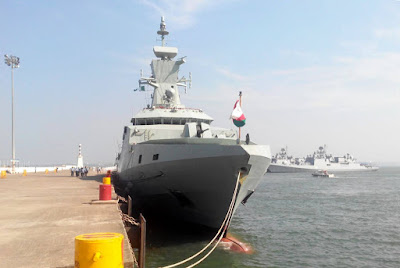 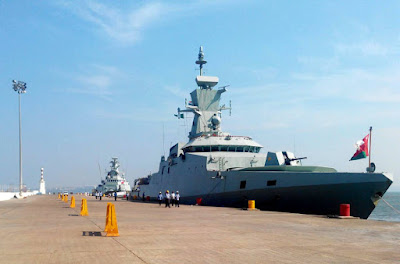 Two Royal Oman Navy ships RNOV Al-Shamikh, a Corvette and RNOV Al-Seeb, a Fast Attack Craft entered the port of Goa today morning. These ships are on their way to participate in the International Fleet Review scheduled at Visakhapatnam from 04-09 Feb 2016.

Prior to the commitments of IFR 2016, the Indian Navy and the Royal Navy of Oman will conduct a bilateral maritime exercise NASEEM AL BAHR in the Arabian Sea from 22 – 27 January 16. NASEEM AL BAHR epitomises the strong long term strategic relationship between the two countries. Initiated in 1993, the exercise has matured over the years with increasing scope, complexity of operations and level of participation. The current exercise will be the tenth such exercise.

The primary aim of this exercise is to increase interoperability amongst the two navies and develop common understanding and procedures for maritime security operations. The scope of NASEEM AL BAHR 16 includes wide-ranging professional interactions during the Harbour Phase and a diverse canvas of operational activities at sea across the spectrum of maritime operations.

The exercise will be progressed in two phases, i.e., the Harbour Phase (22 – 24 January 16) at Goa and the Sea Phase (24 – 27 January 16) off Goa. The Harbour Phase would include variety of professional interactions, courtesy calls, social and sporting interactions and planning conferences. Various facets of Fleet Operations are planned during the Sea Phase, including navigation and seamanship evolutions, surface firing, force protection and anti-piracy exercises as well as flying operations. The exercise is aimed at deriving mutual benefit from each other’s experiences and sharing best practices. The interoperability achieved over the years as a result of such exercises has proved to be operationally beneficial to both navies.