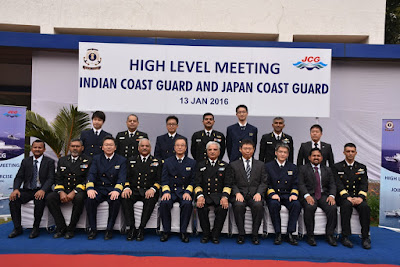 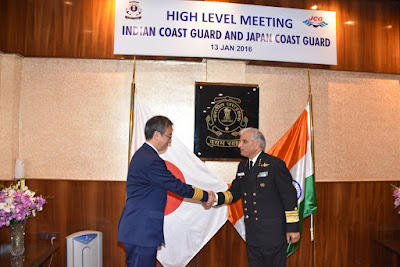 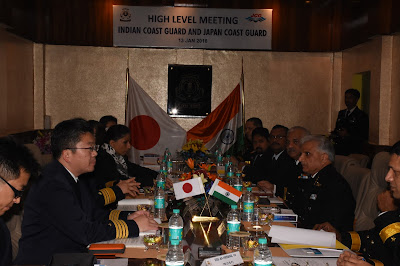 A high level delegation led by Vice Admiral Hideyo Hanazumi, the Vice Commandant, Japan Coast Guard (JCG), is visiting India from 12-16 Jan 2016, for the High Level Meeting and Combined Exercises, with the Indian Coast Guard (ICG). The visit is in pursuance of the Memorandum of Cooperation (MoC), signed between the two Coast Guards in 2006, which stipulates that the heads of the two organizations meet every year to discuss maritime issues of mutual concerns and formulate a cooperative approach to address these.

The Memorandum of Cooperation between the two Coast Guards encompasses issues of maritime search and rescue, combating marine pollution, technical assistance for responding to natural disasters and exchange of information regarding crimes at sea, including smuggling and illicit trafficking.

A high level meeting was held at Coast Guard Headquarters in Delhi on 13 Jan 2016, both Coast Guard heads reviewed progress on bilateral issues as per MoC and also discussed new measures for strengthening the cooperation on evolving collaborative approach in addressing a spectrum of maritime issues concerning maritime safety and security. The Indian delegation during the High Level Meeting was headed by ADG Rajendra Singh, PTM, TM, Additional Director General Indian Coast Guard.

This high level meeting will be followed by a joint ICG-JCG exercise off Chennai on 15 Jan 2016, which will include maritime SAR, anti-piracy and various other procedures of mutual interests. Japan Coast Guard Ship Echigo arrived Chennai port on 12 Jan 16 for participating in the exercise. This joint exercise will be 14th in the series and will be witnessed by the Director General Indian Coast Guard and Vice Commandant Japan Coast Guard.