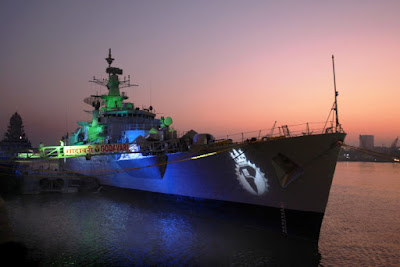 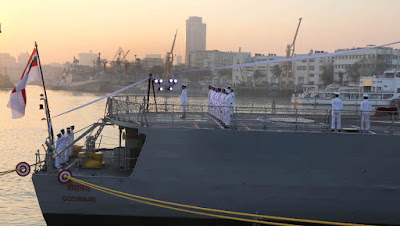 As the sun set on 23rd December 2015, the Indian Navy hauled down its ensign from, the historic guided missile frigate, Indian Naval Ship Godavari, for the last time. In a solemn ceremony at the Naval Dockyard, Mumbai, Vice Admiral R Hari Kumar, Chief of Staff, Headquarter Western Naval Command, decommissioned the 32 year old ship.  The ceremony was attended by a large number of people including ex-Commanding Officers and crew of the ship, and senior officers of the Western Naval Command.

INS Godavari was designed by the Indian Navy’s Design Directorate and Mazagon Dock Shipbuilders Limited (MDL) and was constructed at MDL. Godavari was the first major warship which was completely designed and constructed in India and thus was a significant milestone for the country in its transition from being a ‘buyers Navy’ to a ‘builders Navy’. Commissioned on 10 December 1983, she had completed 32 years of glorious and action packed service to the nation at decommissioning.  She has thus proven the success and effectiveness of the Indian designers and shipbuilders.

At the time of decommissioning, she was commanded by Commander Vishal Rawal who incidentally also started his career as a Midshipman on the same ship.  She was the first of ‘Godavari Class’ guided missile frigates and her sister ships, INS Ganga and INS Gomati, remain in active service.