President Of India At The 88th Convocation of Military College of Electronics and Mechanical Engineering, 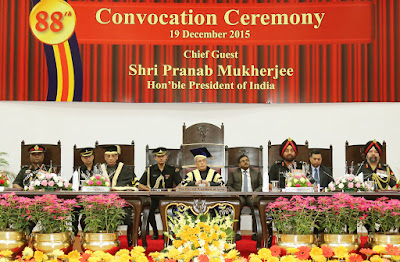 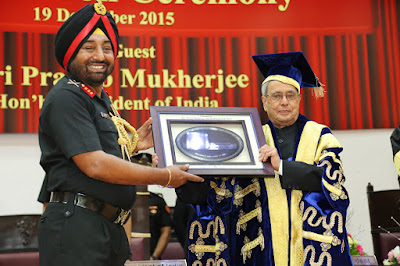 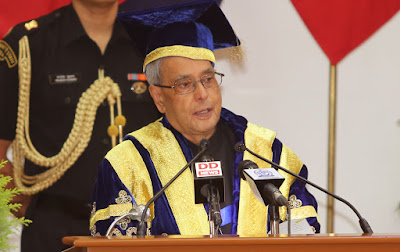 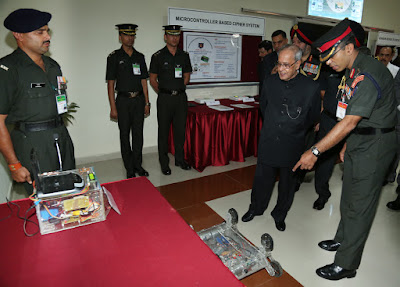 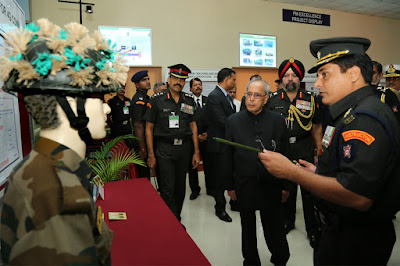 Shri Pranab Mukherjee, Hon’ble President of India was the Chief Guest at the 88th Convocation Ceremony of Military College of Electronics and Mechanical Engineering, Secunderabad. It was a rare honour for the officers of the 96th Degree Engineering (DE) & 24thTechnical Entry Scheme (TES​​) course to receive their awards from the Supreme Commander of the Armed Forces. Speaking on the occasion, the President said ‘’I urge you to set yourself a befitting goal and having done so, utilize your technical threshold and dedicated hardwork to realise it’.

Shri Pranab Mukherjee is the third President to visit MCEME since its raising. Prior to him, Dr Rajendra Prasad and Dr S Radha Krishnan had visited the College in years 1955 and 1964 respectively. However, this is the first time when the President was the Chief Guest for the Convocation Ceremony. The Ceremony was attended by a host of dignitaries includingShri ESL Narasimhan, Hon’ble Governor of Andhra Pradesh & Telangana, Lt Gen PM Hariz, GOC-in-C, ARTRAC, Lt Gen KJ Singh, Director General of Electronics and Mechanical Engineers and many other senior Army and Civilian Officers.

During the visit, the Hon’ble President of India was briefed about the projects designed and fabricated by the graduating officers for the field Army. Shri Pranab Mukherjee appreciated the projects executed by the graduating officers. He also complimented the award winners for their dedication and academic excellence. MCEME is a recipient of four Prime Minister Excellence Awards for Student Projects on the occasion of Army Day-2015.

Military College of Electronics and Mechanical Engineering, Secunderabad, an ISO 9001 certified Institution, was established in 1946. Over the years the College has developed into a premier training institution of the Indian Army. MCEME conducts courses ranging from basic level to M Tech level for training Human Resource of Corps of EME in various disciplines like Mechanical Engineering, Electronics and Communication, Microwave Technology, Aeronautical Engineering, IT and Computer Science. The Diploma and B Tech programmes include diverse Military Equipment ranging from Armoured Fighting Vehicles, sophisticated Communication Equipment, Air Defence Weapon Systems, Radars, Missile Systems, Helicopters and Unmanned Aerial Vehicles. The diversity and complexity of training makes it a unique institute in the Country.  MCEME is affiliated to JNTU and JNU for its M Tech, B Tech and Engineering Diploma programs.

The President Shri Pranab Mukherjee called upon the Military Engineers to define and modify the way Defence Forces operate by using technological advances to provide comparative edge over adversaries the nation face.  Delivering the 88th convocation address at the Military College of EME in Secunderabad today, he said that it will be the responsibility of technocrats in Army to adapt the latest developments in the field of technology for use by the Defence forces by accelerating the pace of military innovation. The President emphasised the Army engineers to make use of their knowledge and enthusiasm for creative ideas and innovations which will impact and improve the existing systems and methods. The President was briefed about the projects designed and fabricated by the graduating officers for the field Army. He appreciated the projects executed by the graduating officers and complemented the award winners for their dedication and academic excellence. ECEME is a recipient of four Prime Minister Excellence Awards for Student Projects on the occasion of Army Day this year.