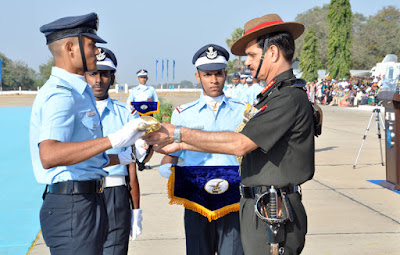 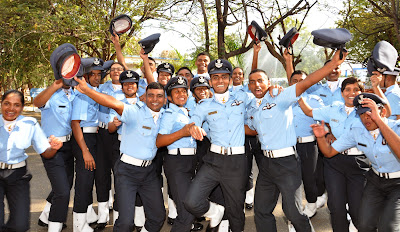 The blue skies of Air Force Academy turned vibrant, with an amazing aerobatics display by various aircrafts of IAF in the air while an impressive march-past on the ground, marked the momentous occasion of the graduation ceremony of 209 Flight Cadets including 60 women (10 women pilots), who have successfully completed their basic and professional training and commissioned into Indian Air Force. The Chief of Army Staff (COAS) General Dalbir Singh graced the solemn ceremony and reviewed the combined graduation parade and presented ‘Wings and Brevets’ to the Flight Cadets to confer them the ‘Commission’ into Indian Air Force, on behalf of the President of India. The Reviewing Officer was accorded ceremonial salute by the parade followed by an impressive march past by the flying cadets. With this, the graduating cadets were formally inducted in the Indian Air Force and posted out to join their new assignments at different branches including flying, ground duty, navigation, logistics, meteorology, accounts, education and administration. General Dalbir Singh also presented ‘Wings’ to officers belonging to Navy and Coast Guards, who have also undergone flying training successfully during the period.

The highlight of the parade was the ‘Pipping ceremony’. The Flight Cadets were awarded their ‘Stripes’ (Air Force rank). The cadets were then administered the ‘Oath’ by the Commandant of the Academy in the presence of the chief guest and other dignitaries. Earlier, the Reviewing Officer was received at the venue by Air Marshal SRK Nair, Air Officer Commanding-in-Chief (AOC-in-C) Training Command and Air Marshal GP Singh, Commandant Air Force Academy.

Later, addressing the flying cadets, the Chief of Army Staff congratulated them and complimented for their exceptional standard of the parade. He emphasised the importance of core values of a military leadership like integrity, courage, honesty, devotion to duty, honour, selfless service to the nation and excellence in everything that we do.

The parade was culminated with the newly commissioned officers marching-out from behind the fort wall, in slow march to the poignant notes of ‘Auld Lang Syne’ acknowledging the first salute given to them by their immediate juniors. They marched in absolute synchrony and with purposeful strides as they saluted the Reviewing Officer and crossed through the portals of their Alma mater to take-on their future assignments and challenges to “Touch the Sky with Glory”. The thrilling and exhilarating occasion was witnessed by the proud family members, friends and well wishers of cadets and the senior serving and retired officers from the three services.

On the penultimate evening, the Reviewing Officer General Dalbir Singh attended the ceremonial guest night and interacted with graduating flights cadets and their parents and presented trophies to the flight cadets who have excelled in their respective streams.