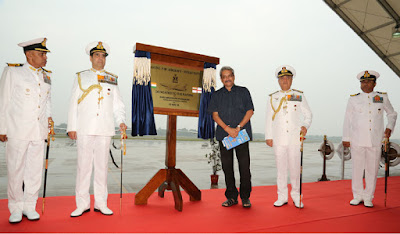 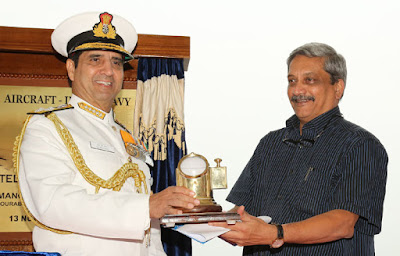 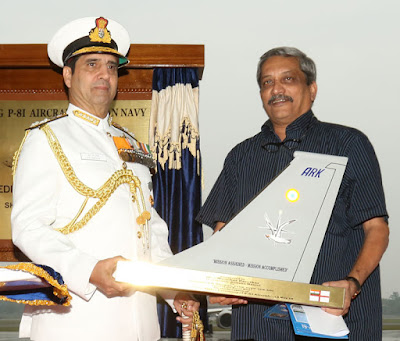 Giving a boost to the firepower and arsenal of the Indian Armed Forces, the Defence Minister Shri Manohar Parrikar dedicated the Boeing P 8 I (Poseidon Eight India) Long Range Maritime Patrol aircraft to the nation this morning, at an impressive ceremony held at INS Rajali, Arakkonam, India’s premiere Naval Air Station in southern India, about 70 Km off Chennai.

The ceremony was attended by a host of dignitaries including the Chief of Naval Staff Admiral RK Dhowan, and Flag Officer Commanding-in-Chief Eastern Naval Command Vice Admiral Satish Soni.

Shri Parrikar, who flew in to INS Rajali on board a Boeing P-8I from Port Blair this morning, described the aircraft as one of the best for surveillance in the world today. During the flight, Shri Parrikar was given an exposure to various sensors and other sophisticated state-of-the-art equipment and their capabilities. He said the aircraft will provide the Indian Navy the necessary reach and flexibility to undertake extensive surveillance as also to respond swiftly and effectively to contingencies in our areas of interest.

Shri Parrikar, in particular complimented the Navy and its air arm for expeditiously inducting and operationalising this force multiplier, which would enable the nation’s Armed Forces to dominate the future battle space. Taking note of the spectacular efforts put in by INS Rajali and its personnel, Shri Parrikar praised the fact that, even in the short phase of trials and testing, the P-8I aircraft had achieved a number of operational milestones which includes participation in the search effort for Malaysian Airlines Flight MH 370, the first successful firing of air launched Harpoon Block II missile in the world, torpedo firing and active participation in major naval exercises.

The P-8I aircraft is a variant of the P-8A Poseidon aircraft that Boeing developed as a replacement for the US Navy’s ageing P-3 fleet. Indian Navy became the first international customer for the P-8 aircraft with the conclusion of the nearly US $ 2.1 billion contract on 01 Jan 2009 for a total of eight aircraft. The first aircraft arrived in India on the 15 May 2013 and as of date; all eight aircraft have been inducted into the Indian Navy and are fully integrated into its operations.

The P-8I aircraft is equipped for long range anti submarine warfare, anti -surface warfare, intelligence, surveillance and reconnaissance in support of broad area, maritime and littoral operations. Its communication and sensor suite includes indigenous equipment developed by defence PSUs and private manufacturers. With its high speed and high endurance of about 10 hours, the aircraft is capable of thrusting a punitive response and maintaining a watch over India’s immediate and extended areas of interest.

The aircraft are based at INS Rajali, and are operated by Indian Naval Air Squadron 312A under the command of Commander Venkateshwaran Ranganathan.