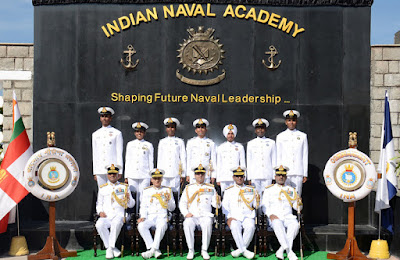 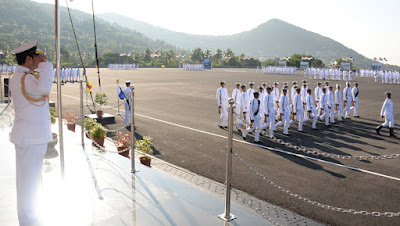 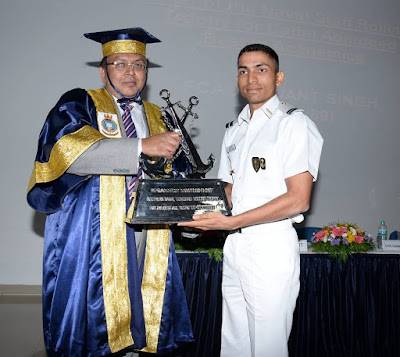 Serve the Country and Navy with Pride: Admiral RK Dhowan, Chief of the Naval Staff Advises Cadets to Strive for Excellence in Every Sphere of Life

The parade was reviewed by the Admiral RK Dhowan, Chief of the Naval Staff. After the ceremonial review, the Admiral awarded medals to nine meritorious cadets. During his address, the Admiral congratulated the passing-out cadets and advised them ‘to serve the Country and Navy with pride and always uphold the five values, viz., commitment -to make supreme sacrifice for the nation and navy, courage- both physical and moral, compassion- towards men and women you lead, credibility- in performance and character and finally to have an integrity beyond doubt – always and every time’. He concluded his address by exhorting the cadets to always strive for excellence in whatever they do in the Navy and in life. The Commander-in-Chief, Southern Naval Command, Vice Admiral Sunil Lanba, Commandant, INA, Vice Admiral Ajit Kumar P, also witnessed this momentous occasion. Earlier on 23 November all the Passing-Out cadets took an Oath of Allegiance, at the War Memorial, Prerna Sthal, which was administered by the Deputy Commandant and Chief Instructor, Rear Admiral MD Suresh. The Passing-out Parade was also witnessed by the proud parents and guardians of all successful cadets, as well as by a large number of local and outstation dignitaries, and media personnel.

The glittering ceremony culminated with the successful cadets forming up in two columns, and marching, with their gleaming swords held in salute, past the Academy’s Saluting Dias (known as the Quarterdeck), in Slow March, to the traditional notes of ‘Auld Lang Syne’, the poignant farewell tune played by all Armed Forces of the world when bidding adieu to colleagues and comrades. Passing-out courses were bid farewell by cadets of junior term who manned the mast as the successful cadets streamed past the hallowed quarterdeck.

On completion of the parade, the ceremony of ‘Shipping-of-Stripes’ was conducted. The proud parents/guardians of the passing out cadets shipped the Naval (or Coast Guard) epaulettes, popularly known as ‘Stripes’, on the shoulders of their children/wards, thus symbolizing their transformation from ‘cadets’ into full fledged Naval or Coast Guard Officers. The Reviewing Officer and other dignitaries present congratulated the trainees on their successful completion of the rigorous course. On completion of the training at the Indian Naval Academy, the officers will proceed to various Naval and Coast Guard ships/establishments, to further consolidate their training in specific fields.