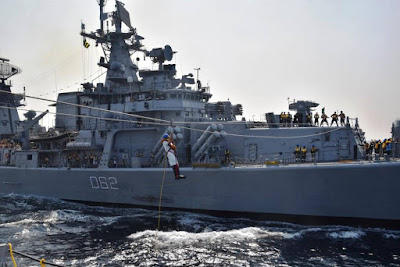 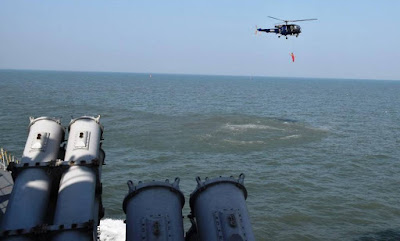 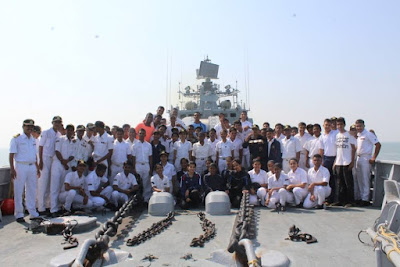 Navy Day is all about youth. With a bid to expose the young citizens of our country on the complexity and significance of the Indian Navy, a day at sea was organised for cadets from National Cadets Corps (NCC) and Sea Cadets Corps (SCC). IN Ships Teg, Mumbai and Mysore embarked 563 cadets and 23 instructional staff for a sea sortie which showcased life at sea and fleet operations today. Such firsthand exposure goes a long way in introducing the cadets towards overall concepts of defending our country and cutting edge technology being used in the navy.

The event started, this morning, with a brief on the ship, safety instructions and a walk around of the ship. Since cadets do have basic theoretical knowledge about ships, this sea sortie provided excellent practical exposure. The evolutions for the day at sea included Force Protection Measures (FPM) drill, helicopter demo and fly past, anti aircraft firing, jackstay (a drill to transfer stores from one ship to another while ships are underway) and fire fighting and damage control drills.

In the run up to Navy Day, a variety of interactions with school students are organised by the Western Naval Command for exposing the future of our country to Indian Navy. These interactions include band concerts and parades, helicopter demonstration, visit to ships in harbour and day at sea. Children from many schools will also be proceeding to sea on 28 November 2015.