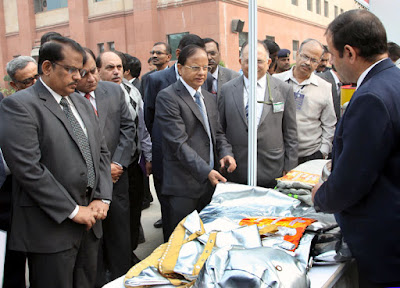 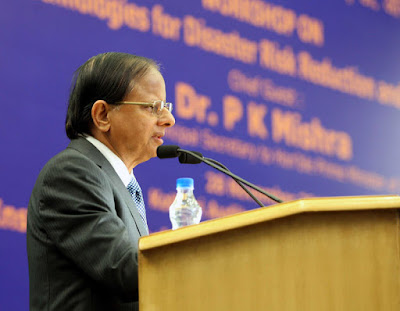 DRDO organised a one day workshop here today with the objective to showcase technologies and products developed indigenously by the organisation which can be readily adopted or customized for disaster management. The workshop was inaugurated by Addl Principal Secretary to the Prime Minister Dr. PK Mishra in the presence of Secretary Department of Defence R&D and Director General, DRDO Dr. S Christopher.

Speaking on the occasion Dr. PK Mishra said India has been hit by disasters frequently which were both man-made and of natural origin and the steps taken and lessons learnt from the past should be utilised and make it sustainable by using better innovations. He stated that ‘in the past the approach to disaster management was mostly relief centric but now we have to think differently and must delve more on the process of mitigation and preparedness for any kind of eventuality’. Dr Mishra further said that apart from natural calamities, cyber disaster pose a new threat in the present day situation and there is a need to address this challenge where the DRDO and other stakeholders can contribute immensely. He complimented the vital role of DRDO for its innovations and training efforts towards disaster management.

Dr. S Christopher in his keynote address said natural hazards affects nearly six percent of India’s population and 24 percent of deaths in Asia caused by disasters. He stated that DRDO has developed several technologies as an offshoot of defence research which find useful applications for disaster management. He also mentioned that the organisation will continue to be in the technological development and support mode to save precious human lives.

The stakeholders participating in the workshop are NDMA, NDRF, MHA, Armed Forces, CRPF, CISF, NSG, NIDH and others. To showcase the products and technologies, an exhibition was also organised where eleven DRDO laboratories showcased their products and made technical presentations. Panel discussions amongst dignitaries of various stakeholders were also conducted with the objective to define trajectory of developmental activities of DRDO for future technological solutions to assist risk mitigation and preparedness against disasters. Apart from various stakeholders, several industry development partners also participated in the workshop.

DRDO’s indigenous technologies can be easily adapted towards disaster management solution by various stakeholders. The Industry partners are locally manufacturing these products and technologies are readily available.