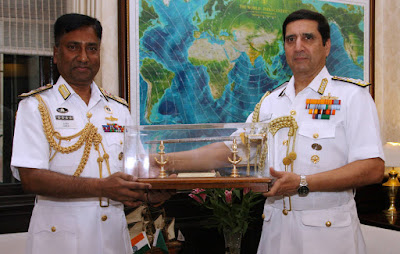 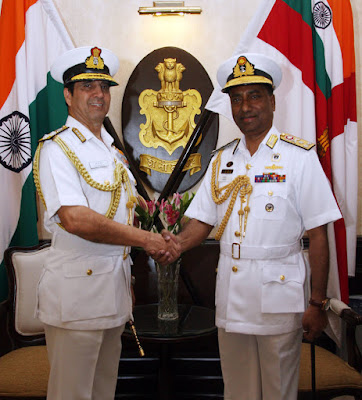 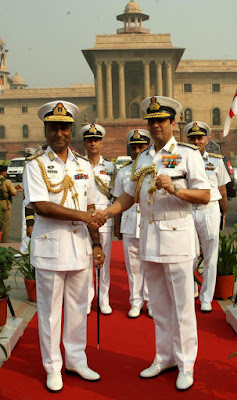 Vice Admiral Muhammad Farid Habib, Chief of the Naval Staff, Bangladesh Navy is on a four day official visit to India from 02-06 November 2015 to review the existing cooperation between both navies and explore future avenues. The Bangladesh Navy Chief was formally received by Admiral RK Dhowan, Chief of the Naval Staff and accorded a ceremonial Guard of Honour at South Block lawns earlier in the day. Both the Chiefs had discussions on various issues during the day. The visiting dignitary had interactions with DG Coast Guard and senior officials of MoD thereafter. The BN Chief of Naval Staff is also scheduled to visit HQWNC (Mumbai) and Garden Reach Shipyard at Kolkata.

India-Bangladesh relations are based on historical legacy, culture and geography. India was the first country to recognise Bangladesh as a separate and independent state. India and Bangladesh’s geographical location presents an opportunity to develop mutual economies as well as enhance maritime security. In the last four and half decades, both nations have built a comprehensive framework to promote bilateral cooperation. The signing of ‘Land Boundary Agreement’ during the recent visit of Hon’ble Prime Minister of India to Bangladesh as well as acceptance of maritime boundary delimitation decision by Arbitration tribunal indicates maturity of bilateral relations between both nations.

The naval cooperation between both navies span a wide spectrum of maritime activities that includes BN’s regular participation in multilateral naval exercise MILAN conducted by Indian Navy at Port Blair, Navy to Navy Staff Talks, cooperation in training as well as port calls by ships to each other’s ports. Regular exchange of naval experts and professionals ranging from young cadets to high-level officials provide opportunities for sharing of experience and best practices.

Bangladesh Navy has been an active participant in India initiated maritime construct Indian Ocean Naval Symposium (IONS) and is scheduled to take over as Chairman of IONS from 2016-2018. Bangladesh Navy is also planning to send a ship as well as high-level delegation during the International Fleet Review in Feb 16 at Visakhapatnam.

The visit by Vice Admiral Muhammad Farid Habib, Chief of Naval Staff Bangladesh Navy is aimed at consolidating existing naval cooperation as well as exploring new avenues. Areas of cooperation that are proposed to be discussed during the visit of BN Chief of Naval Staff include, option of coordinated patrolling along International Maritime Boundary Line(IMBL), bilateral exercises between both navies, joint surveillance of Exclusive Economic Zone, cooperation in hydrography, exchange of White shipping information, measures to augment Maritime Security in Bay of Bengal, cooperation and collaboration in ship building as well as cooperation in development of Blue Economy.