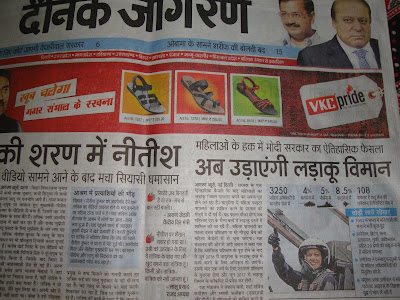 The Ministry of Defence has approved the induction of women into the Fighter (Combat) stream of the IAF. This progressive step is in keeping with the aspirations of Indian women and is in line with contemporary trends in Armed Forces of developed nations. Since their induction into the transport and Helicopter streams of the IAF, their performance has been praiseworthy and on a par with their male counterparts. Inducting women into the fighter stream would provide them with an equal opportunity to prove their mettle in combat roles as well.

The first women pilots would be selected from the batch which is presently undergoing flying training at Air Force Academy. After successful completion of ab-initio training, they would be commissioned in the fighter stream in June 2016.

Thereafter, they would undergo advanced training for one year and would enter a fighter cockpit by June 2017.

Women officers in the IAF are in non-combat branches like Logistics, Education, Administration, Fighter and Air Traffic Controller, Engineers and Helicopter and transport pilots.

A male fighter pilot says, "I feel lady officers are more mature and hard working and more disciplined officers. If a job is given to them, rest assured, it will be completed on time.In pregnancy they cant fly, but they more than make-up for it by being unit adjutant , which is as important.Their combat acumen has to be seen."