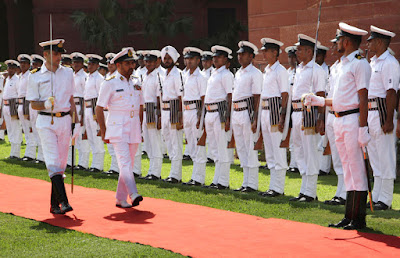 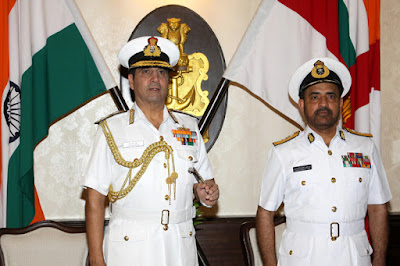 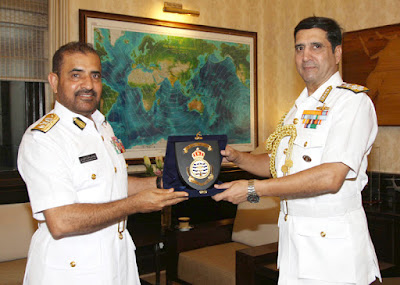 Rear Admiral Abdullah Bin Khasim Bin Abdullah Al Raisi, Commander of the Royal Navy of Oman is on an official visit to India from 07 to 10 Sep 15. The Admiral paid homage at Amar Jawan Jyoti earlier today and was thereafter received by Admiral RK Dhowan, Chief of the Naval Staff at South Block lawns, New Delhi and accorded 50 men Guard of Honour.

Oman is geographically India’s closest neighbour among the Arab countries in the strategically vital Persian Gulf region. The presence of about five lakh Indians and people to people contact further enhances Oman’s importance to India. India and Oman share historical, cultural linkages as well as maritime trade linkages with dhows visiting each other’s ports for trade and commerce since time immemorial. After India’s independence, the 1953 Indo-Oman ‘Treaty of Friendship, Navigation and Commerce’ was one of the first treaties to be signed between India and any Arab country. Indian Consulate was set up in Muscat in 1955, and till 1970, was one of only two Consular Missions in Oman, the other being the British. The Indian Rupee was a legal tender till the 1960s.

The structures for defence cooperation between India and Oman flow from an Indo-Oman Strategic Consultative Group (SCG). MoU on Defence Co-operation between the two countries was signed in Dec 05.

Indian Navy and Oman Navy share a robust relationship with Indian Navy being the major partner in undertaking training for Royal Oman Navy officers and personnel. Indian Navy ships regularly call at Oman ports. The ships from Western Fleet are scheduled to visit Oman in end Sep 15 and Indian Sail Training ship Tarangini will make a port call in Muscat in Nov 15. Similarly Oman Navy ships regularly visit Indian ports and are scheduled to participate in International Fleet Review in Visakhapatnam in Feb 2016.

High level exchanges are regularly undertaken between both nations to not only cement and review existing ties but also explore future avenues for cooperation between the two countries.

The Admiral is scheduled to visit Headquarters Western Naval Command at Mumbai as well as Indian Navy’s premier training institute at Lonavala. A large number of Royal Oman Navy personnel undergo training at this institute. The Chief of Royal Oman Navy will also visit Headquarters Southern Naval Command at Kochi to explore further avenues of cooperation in training. The dignitary will also be shown various training facilities at Kochi during his visit.

The visit by Chief of Royal Oman Navy will further enhance Navy to Navy cooperation that ranges across the entire spectrum from bilateral exercise Naseem - al -Bahr to exchange of white shipping information and enhanced training cooperation.