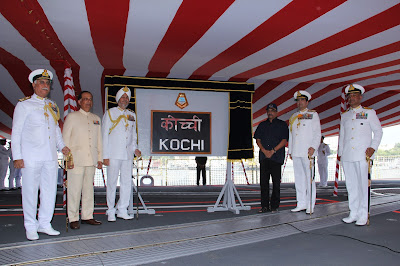 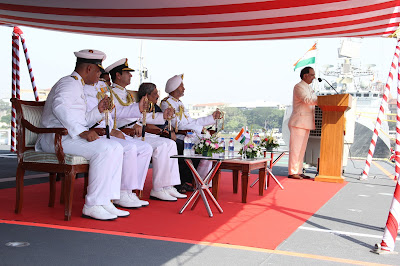 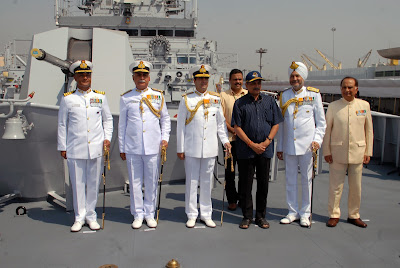 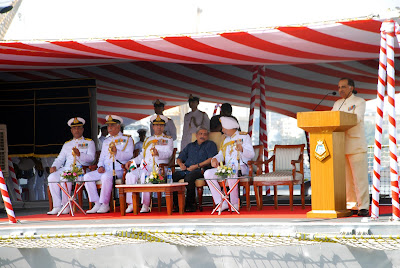 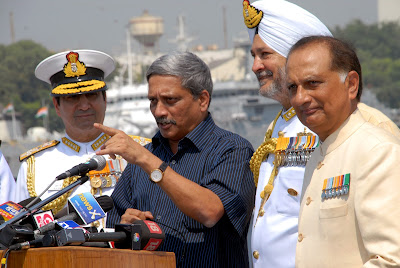 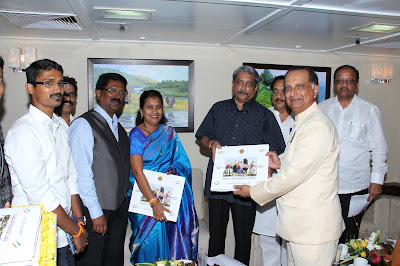 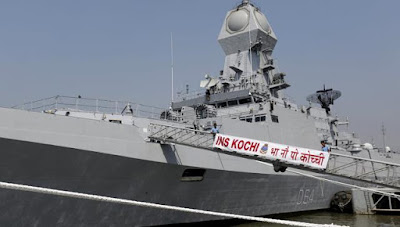 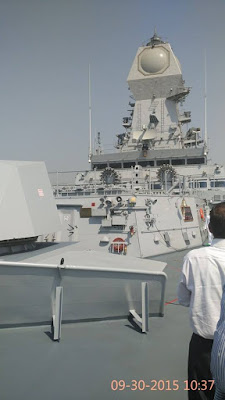 The Defence Minister Shri Manohar Parrikar today said the Government is fully committed to develop a real Blue Water Navy, a Navy which can dominate the Indian Ocean Region, but will be considered friendly by the neighbouring countries.

Commissioning INS Kochi, the second ship of the indigenously designed and constructed Project 15A (Kolkata-class) guided missile Destroyers, Shri Parrikar gave two examples to illustrate his point- that of transporting drinking water to Maldives when the latter’s water treatment plant was damaged last year, and the rescue and evacuation of nationals of over 20 countries from war-torn Yemen by the Indian Navy, without any damage to our platforms and personnel.

INS Kochi has been built by the Mazagon Dock Ltd., Mumbai.

Shri Parrikar said there has been a renewed enthusiasm among DPSUs and the Private Sector in the development and production of platforms and systems for the Defence Forces and the government has been consistently trying to indigenise and speed-up timely deliveries. He hoped that the next Destroyer in the series will be put into water by the end of the current financial year.

Shri Parrikar said while we have achieved significant indigenisation in ‘Float’ component of warships, we are lacking in the indigenization of the high-end Fight components. To that end, the Government is in the process of putting a policy in place to achieve high amount of self- reliance in the defence industry under the guidance of the Prime Minister Shri Narendra Modi.

The Defence Minister said the Government is seized of the Nation’s defence requirements and requisite financial support for the Armed Forces and defence industry will be made available, which includes the modernization and development plans of the Navy. Towards this the Government shall always remain committed to provide the necessary funds for the future expansion and growth of the Navy.

Speaking on the occasion, Admiral RK Dhowan said that commissioning of INS Kochi is a milestone in the self-reliance programme of the Navy and stated that the indigenisation of platforms, weapons, sensors and equipment, through public as well as private sectors, will continue to remain a focus area of the Indian Navy. He emphasized that the 'Roadmap for the Navy's expansion and growth would continue to remain firmly anchored on Self-reliance and indigenisation'.

“Induction of INS Kochi, with her multi-dimensional combat capability, adds more teeth to the sword arm of the Indian Navy in discharging her duties of safe-guarding national maritime interests. This further reaffirms our resolve and faith in indigenous ship building and “Make in India” programme”, he said.

The Project 15A Destroyers are the follow-on ships of the legendary Project 15 'Delhi' class Destroyers which entered service in the late 1990s. Conceived and designed by Indian Navy's Directorate of Naval Design, the P15A ships have been christened after major port cities of
India; Kolkata, Kochi and Chennai. The Keel of Kochi was laid on 25 Oct 05, and launched on 18 Sep 09. Kochi is the second of the Kolkata class and is of the most potent amongst the surface combatants that have been constructed in India. It measures 164 meters in length and approximately 17 meters in width, with a full load displacement of 7500 tonnes. The ship has a combined Gas and Gas (COGAG) propulsion system, comprising four powerful reversible gas turbines; and can
attain speeds in excess of 30 knots. The Ship's electric power is provided by four gas turbine generators and one diesel alternator, which together produce 4.5 Mega-Watts of electrical power. The ship has a complement of 40 officers and 350 sailors.

INS Kochi incorporates new design concepts for stealth and has many firsts to her credit, including a very large component of indigenous combat-suite. The ship is packed with the most sophisticated
state-of-the-art weapons and sensors including the vertically launched Long Range Surface to Air Missiles (LRSAM) and MF-STAR multi-function active phased array radar, which is fitted only on the Kolkata class of ships. She is equipped with the advanced supersonic and long range BrahMos Surface to Surface Missile – a joint Indo-Russian venture. The 76 mm Super Rapid Gun Mount (SRGM) and AK 630 CIWS, both manufactured indigenously, can take on air and surface targets. The entire anti-submarine weapon and sensor suite fitted onboard, consisting of Indigenous Rocket Launchers (IRL), Indigenous Twin-tube Torpedo Launchers (ITTL) and a bow-mounted New Generation HUMSA Sonar are fine examples of India’s indigenous efforts in the field of underwater warfare. The sensor suite includes other advanced Surface to Air surveillance radars and an indigenous Electronic Warfare System. A state-of-the-art Combat Management System (CMS- 15A) has been integrated with the onboard weapons and sensors. The ship is equipped to operate two Seaking or Chetak Helicopters.

The Ship can be truly classified as a 'Network of Networks' as it is equipped with sophisticated digital networks, such as Asynchronous Transfer Mode based Integrated Ship Data Network (AISDN), Combat Management System (CMS), Automatic Power Management System (APMS) and Auxiliary Control System (ACS). The AISDN is the information highway on which data from all the sensors and weapon ride. The CMS is used to integrate information from other platforms using indigenous data-link system, to provide Maritime Domain Awareness. The intricate power supply management is done using APMS, and remote control and monitoring of machinery is achieved through the ACS.

The unique feature of the ship is the high level of indigenisation achieved with most of the systems onboard sourced from within the  country. Some of the other major indigenised systems onboard INS Kochi include the Electronic Warfare Suite, Foldable Hanger Doors, Helo Traversing System and Ship’s Stabilisers. Crew comfort is a significant feature of INS Kochi and has been ensured through
ergonomically designed accommodation and galley compartments based on modular concept.

INS Kochi derives her name from the vibrant port city of Kochi. This is a tribute to the city’s distinct maritime character and culture, and symbolises the special bond between the Indian Navy and the city of Kochi. The ship’s crest depicts a sword and a shield together with a Snake Boat riding on the blue and white ocean waves, which symbolise the Malabar region’s rich maritime heritage and martial traditions. The crew of the ship abides by the Sanskrit motto “Jahi Shatrun Mahabaho” which means “Oh mighty armed one… conquer the enemy”.

The Commanding Officer, Captain Gurcharan Singh, read out the Commissioning Warrant, prior to the hoisting of 'Colours' (the national flag and naval ensign) for the first time onboard the ship.
Following her commissioning, INS Kochi will be based at Mumbai, under the operational and administrative control of the Flag Officer Commanding-in-Chief, Western Naval Command.

A state of the art naval platform, INS Kochi is a fine example of the outstanding work being carried out at the State owned Shipyard. The ship matches feature by feature with the best in the world. With this landmark step we move closer to our cherished dream of self sufficiency in

MDL has been abuzz with frantic activity during the last year since the commissioning of INS Kolkata in August 2014. The third and last in this series, Chennai is racing to completion and is expected to be delivered in this financial year. 2014-15 have been exciting years at Mazagon Dock, as the Company mops up landmark after landmark.

Having spent over 800 crores in modernizing its facilities, Mazagon Dock is now ready to commence production of the futuristic 17A project. It will in fact show the way to other shipyards in modular construction which will bring down production time of a large platform, like this one, to around five years. MDL is now creating construction facilities for a second assembly

Kalvari, the first Scorpene class submarine, which was undocked by the Hon’ble Raksha Mantri in April last, will shortly proceed for sea trials to meet its delivery deadline of September 2016. The remaining five boats in this class are scheduled for delivery, within nine months of each other.

Never has the yard seen such hectic activity in the past as it delivers platforms in a race against time to prove its capability to the world at large. The executives and operative of the Shipyard are fully seized of the challenges that lie ahead and are committed to meet them.