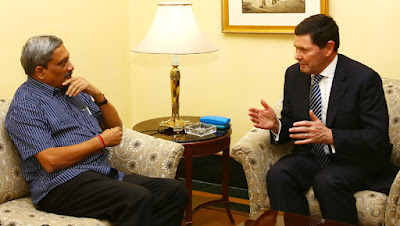 The Australian Minister of Defence Mr. Kevin Andrews is on a four-day visit to India from 31st August 2015. Today the visiting Minister held talks with the Defence Minister Shri Manohar Parrikar in New Delhi which was followed by delegation level talks to discuss issues of shared strategic interest and the current state of the bilateral defence relationship between the two countries. After the talks the two sides issued the following joint statement:

“The Ministers acknowledged the positive progress made during the past year in bilateral defence cooperation, and underscored their ongoing interest in fostering and maintaining peace and stability in the Indo-Pacific region. The Ministers also discussed the centenary of the First World War and recalled the contribution made by the Indian and ANZAC forces during the Gallipoli campaign.

The Ministers affirmed their desire to continue to broaden and deepen the bilateral defence relationship based on shared strategic interests and to implement the action plan outlined in the Framework for Security Cooperation agreed to by the Prime Ministers Narendra Modi and Tony Abbott on 18 November 2014.

Given both nations' interest in the Indian Ocean and its vital importance to regional and global trade, the Ministers acknowledged the importance of freedom of maritime navigation and agreed that maritime security should remain a key component of the bilateral defence relationship. Australia and India will also continue to cooperate through joint work as part of the ASEAN Defence Ministers' Meeting Plus construct. The Ministers also agreed to continue enhancing relationship between Indian and Australian navies, through bilateral ship visits, exchanges as also through Indian Ocean Naval Symposium and such other fora.

The first Navy-to-Navy Bilateral Maritime Exercise will be held later this month. The exercise will involve multiple ship visits and maritime assets from both the countries. The exercise will foster greater interoperability and cooperation between both nations and further contribute to maritime security.

Both the Ministers noted that since the last Defence Ministers' Meeting, India and Australia have held Defence Policy Talks, and bilateral Army, Navy and Air Force Staff Talks. To further bolster this good progress, it was agreed that the Ministerial level meeting may continue to be held regularly while the Army to Army talks would now be held on annual basis.

The Ministers agreed that specific initiatives for enhanced cooperation will include the following activities:

The Defence Science and Technology Organizations and the Defence Research and Development Organization would continue to explore opportunities to identify areas for cooperation, initially through an exchange of letters followed by the respective organization heads meeting later in 2015.

The commencement of a partnership between our respective peacekeeping centres. This will start with closer engagement to enhance knowledge sharing and mutual capacity building.

Royal Australian Navy participation in the Indian Navy International Fleet Review in February 2016. The continuation of the Bilateral Maritime Exercise on a biennial basis.

The establishment of a Joint Working Group on Defence Research and Material Cooperation.

The Ministers agreed that implementing these initiatives would further strengthen the already robust defence relationship between Australia and India and that their long-term objective is to develop a significant defence and security relationship. This will be important as we respond to shared challenges and work together to ensure a secure and stable region.

Minister Andrews thanked Minister Parrikar for the hospitality he received during his visit to India and said he is looking forward to hosting the next Defence Ministers’ Meeting in Australia.”

Yesterday, the visiting dignitary had called on the Prime Minister Shri Narendra Modi. Earlier today Mr Andrews visited Amar Jawan Jyoti at India Gate and paid homage to the martyrs by laying a wreath there. Later he was accorded an inter-Services Guard of Honour in the lawns of South Block. He also attended a round-table meeting at Institute of Defence Studies and Analyses (IDSA).