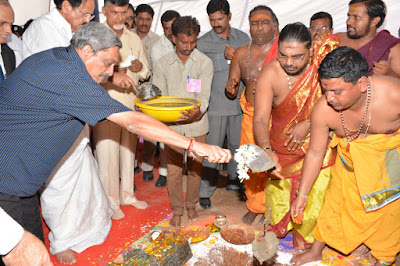 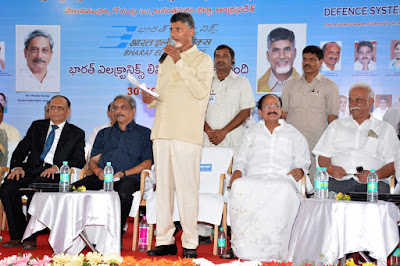 Navratna Defence Public Sector Undertaking Bharat Electronics Limited (BEL) is setting up a Defence Systems Integration Complex at Palasamudram, Gorantala Mandal in Anantapuramu district of Andhra Pradesh. It will be the largest such facility in the country once it is commissioned, covering an area of over 900 acres. The Defence Minister Shri Manohar Parrikar, will lay the foundation stone for this facility tomorrow in the august presence of the Chief Minister of Andhra Pradesh Shri N Chandrababu Naidu, Union Minister of Urban Development & Parliamentary Affairs Shri M Venkaiah Naidu, Union Minister for Civil Aviation Shri P Ashok Gajapathi Raju, Minister of State for Commerce & Industry Smt Nirmala Sitharaman and Minister of State for Science & Technology Shri Y S Chowdary.

BEL have been continuously investing in modernisation and creation of special infrastructure to cater for emerging defence business opportunities. The upcoming facility at Palasamudram is one such initiative. Shri SK Sharma, Chairman & Managing Director, BEL, said that BEL is also strengthening its infrastructure in areas like Night Vision technologies and elements of Multifunction Radars. Various new Surface-to-Air Missile (SAM) programmes are proposed to be taken up by BEL, namely Quick Reaction SAM, Long Range SAM, Medium Range SAM, etc. in addition to Network Centric Communication and Electronic Warfare systems.

He adds, to achieve self-reliance in defence, there is need for a very strong indigenous R&D. In this direction, BEL has not only maintained a consistent policy of R&D investments but also has launched collaborative R&D with private SME firms in the country. On an average, 80% of BEL’s Sales turnover is from indigenous R&D every year. BEL has now launched a Product Development & Innovation Centre at Bangalore to give further thrust towards indigenous R&D.

The facility is about 80 Km from the Bengaluru International Airport on NH7. The proposed Complex will be a world-class facility with Automated Guided Vehicles and Industrial Robots for material movement and handling. The facility will be built in stages as the various projects mature and the estimated investment will be about Rs. 500 Crores over a period of 3 to 4 years.

BEL also plans to expand this facility for the creation of a Military Industrial Complex to set up the necessary ecosystem for manufacture of electronic components and equipment for various upcoming Defence projects in collaboration with SMEs as part of the Government’s ‘Make in India’ initiative.