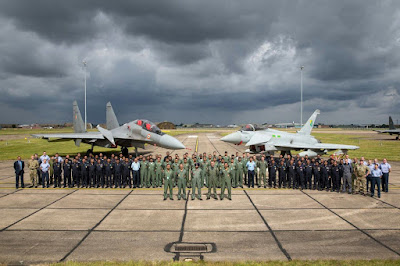 1. Having ‘touched the sky with glory’ in consonance with the motto of the Indian Air Force (IAF) “Nabhah Sparsham Deeptam”, the air warriors of IAF are now set to return home after successful completion of the Indo-UK bilateral air exercise, Indradhanush. This was the fourth edition of Ex-Indradhanush which commenced at UK on 21 Jul 15. Different elements of the IAF contingent operated from separate Royal Air Force (RAF) bases – The Sukhois from Corningsby, combat support elements from Brize Norton and the Garud special forces from Hunnington. The exercise comes to a close today. The C-130J flew out of Brize Norton on 30 July as necessary equipment is required for receiving the rest of the contingent at intermediate bases.

2. The IAF team has flown combat training missions along with RAF, involving contemporary tactics. The two air forces also operate common combat support platforms, namely the Globemaster and the Super Hercules. Mutual exchange of ideas as regards operational philosophy for tactical and strategic missions has provided invaluable learning for both sides. The IAF Garud regiment of Special Forces is operating with the RAF regiment in various aspects of training. The troops practiced various missions in urban warfare which also included combat missions in a near-realistic scenario.

3. The bonhomie amongst personnel on both sides has been exceptional and in the true spirit of a bilateral exercise. The Air warriors of the IAF have been performing exceptionally well, demonstrating their high standards of training, Operational preparedness, flexibility and adaptability. The RAF had been very forthcoming in meeting all operational, maintenance and administrative requirements of the IAF contingent. Needless to say, the learning value from this interaction has been immense.