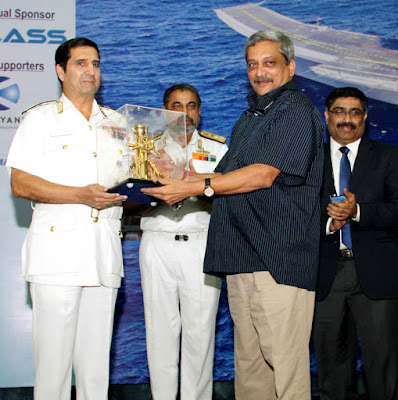 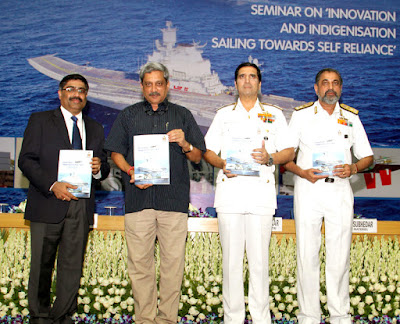 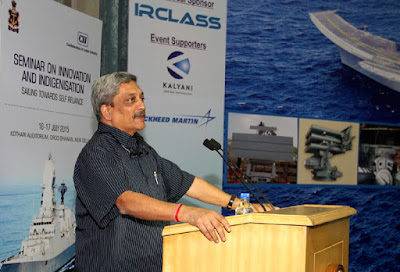 In pursuance of the Govt of India’s ‘Make in India’ policy and the Indian Navy’s quest for ‘Self Reliance through Indigenous Development’, a seminar titled “Innovation and Indigenisation – Sailing towards Self Reliance” is being organised at DRDO Bhawan, New Delhi on 16 and 17 Jul 15.

The Union Minister for Defence, Shri Manohar Parrikar being felicitated by the Chief of Naval Staff, Admiral R.K. Dhowan, at the Seminar on the “Innovation and Indigenisation – Sailing towards Self Reliance”, in New Delhi on July 16, 2015.

In pursuance of the Govt of India’s ‘Make in India’ thrust and achieving the Indian Navy’s goal of self-reliance through indigenous development, a two day seminar on “Innovation and Indigenisation – Sailing towards Self Reliance” was inaugurated today by Chief of the Naval Staff Admiral RK Dhowan at DRDO Bhawan, New Delhi. The seminar is being conducted by Indian Navy in association with the Confederation of Indian Industry (CII).

Vice Admiral AV Subhedar, Chief of Materiel delivered the opening address and stated that the seminar is a step in the direction of realizing the dream of “Make in India”. Chief of the Naval Staff Admiral RK Dhowan in his inaugural address brought out the need to harness cutting edge of technologies to increase the indigenisation content in future ships, submarines and aircraft.

Hon’ble Raksha Mantri, Shri Manohar Parrikar in his keynote address called upon the industry to play a significant role in accomplishment of national security as well as the nation’s quest for self reliance. The minister appreciated the role of DRDO in supporting the efforts of the Navy in achieving their goals towards indigenization and lauded the efforts put in by the Indian Navy and CII for their efforts in supporting the nation’s thrust on “Make in India”. Hon’ble Raksha Mantri also released the document titled “Indian Naval Indigenisation Plan (INIP) and released the compendium of technical papers of seminar”.

The seminar is spread over two days and is being attended by senior Government Officials, leaders from Ship Building Industry, Captains of Indian Industry and members of Academia besides officers from all the armed forces. More than 300 hundred dignitaries from over 120 industries are participating in the seminar. Four Sessions for presentation of technical papers have been scheduled in the programme over two days. Papers on ‘Synergy amongst stakeholders in Indigenisation’, ‘Innovation for Self Reliance’ ‘Challenges in induction of Indigenous Systems’ etc would be presented by speakers from IN, DPSUs, industry and academia.