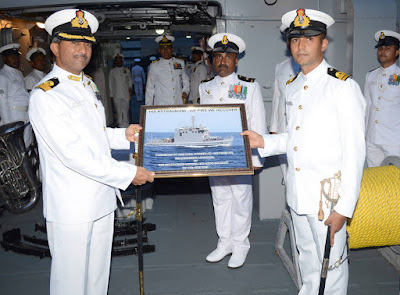 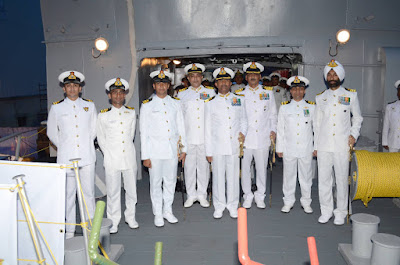 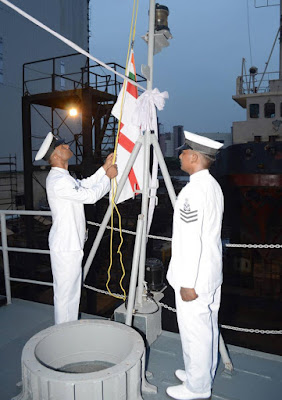 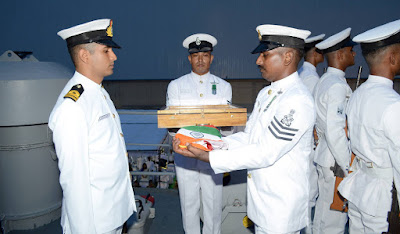 A very proud and sombre moment for Eastern Naval Command as INS Astravahini, an indigenously built Torpedo Launch and Recovery Vessel was decommissioned by Commodore KA Bopanna, Naval Officer-in-Charge (APD) in a ceremony held at the Ship Building Centre (V) at sunset on 16 July 2015.

The ceremony commenced with an impressive guard of honour and culminated in hauling down of Naval Ensign for the last time at sunset. Commodore KA Bopanna, NOIC (APD), while addressing the crew and esteemed guests present during the ceremony, highlighted the contribution made by the vessel in the trials of indigenous torpedoes developed by NSTL..

An auxiliary vessel of the TLRV (torpedo launching and recovery) class, the ship was ordered to be built by NSTL in October 1981 for Defence Research and Development Activities. The Ship was commissioned on 05 November 1984 at Visakhapatnam and decommissioned today after serving the nation for almost 31 years. The only one of its class, the ship was extensively used by NSTL as a test platform to launch and recover experimental torpedoes prior their induction into the Navy. In her long service the ship has considerably enhanced the Make in India efforts of NSTL in indigenous torpedo induction. The ship was commanded by Lt Rohan Kulkarni.