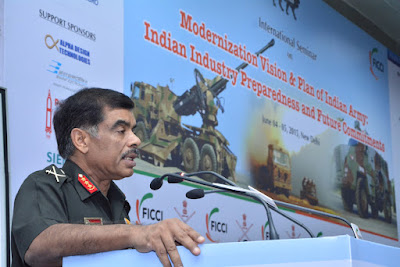 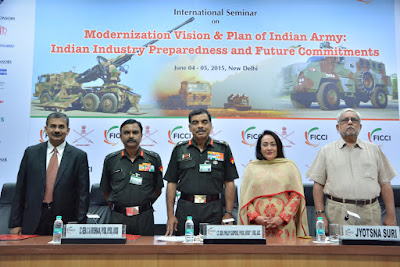 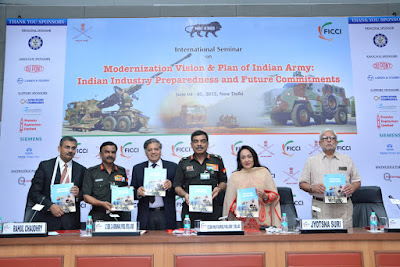 NEW DELHI, June 4, 2015. There was a need for greater penetration by the private industry to meet the growing requirements of the Indian Army. With enhanced involvement of private industry, the Army today needs indigenized, cost effective and innovative solutions to modernize its equipment and technology.

He said that the ‘Make in India’ campaign launched by the Government of India has found great enthusiasm with the Indian Army. The highly complex, technologically advanced and lethal battlefield of today needs India to be well equipped and operationally prepared. Lt. Gen. Philip Campose added that there was need for a synergized approach by all stakeholders to ensure success of the ‘Make in India’ campaign.

Lt. Gen. Campose said that Indian soldiers were amongst the best in the world and it was important to provide them with modern technology and weapons to combat the enemy and boost their morale. He added that Indian Army’s response to emergencies has been swift, synergized and professional and to continue to do so it needed high level of preparedness, which would come with reliable ammunitions and indigenized technology.

Mr. Vivek Rae, Member, 7th Central Pay Commission & former Director General (Acquisition), Ministry of Defence, Government of India, said that the government needed to be realistic about the capabilities of the Indian companies to play a lead role in the ‘Make in India’ campaign. He suggested that first the capacity of Indian companies, such as large system integrators, should be assessed. Accordingly companies must be identified as champions of industry through a transparent process and national consensus, for their capability to develop complex defence products. Then a mechanism could be created where these companies could be awarded orders so that they could become globally competitive.

Speaking on lack of cost accountants in the armed forces, Mr. Rae said that there was a need to boost cost accounting capability in the sector. Price discovery through bid would have been an ideal situation but as there were not many companies that would bid for defence projects in India. Hence, it was essential for Army to be able to probe the lifecycle cost of projects accurately and after adding a profit margin of 10-15%, they could offer a project to companies. He added that India had a vision but needed a strong determination and will to implement strategy with national consensus.

Dr. Jyotsna Suri, President, FICCI, said with the gradual shift in geopolitical diplomacy, India was emerging from a regional power to a global power. The defence sector was increasingly occupying more space in the Government's long term strategic planning with the defence cooperation agreements that India was signing with key nations. She added that historically institutions like DRDO, Defence Public Sector Units, Ordinance Factories and lately the private sector have contributed in achieving partial self-reliance. However, this is not commensurate with our aspirations of becoming a global economic power.

Dr. Suri said that with the current thought process, industry was geared to accept this challenge and work as ‘Team India’ for fulfilling the objective of creating substantive self-reliance in defence. For Indian industry to be in global supply chain, we need to invest heavily in R&D in order to ensure high precision and zero defect world class product quality, she added.

Mr. Rahul Chaudhry, Co-Chairman, FICCI Defence Committee & CEO, Tata Power SED, said that with ‘Make in India’ campaign, the Indian government for the first time had showcased a will to not only indigenous Indian Army but also  to export Indian defence systems. To achieve this, it was essential to measure the Indian industry’s capabilities and control the technology. There was a need for the private industry and armed forces to create technology and weapons in India with a control over intellectual property, he added.