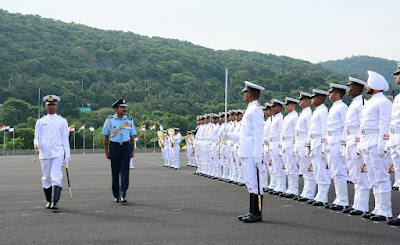 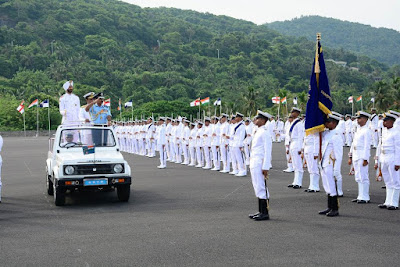 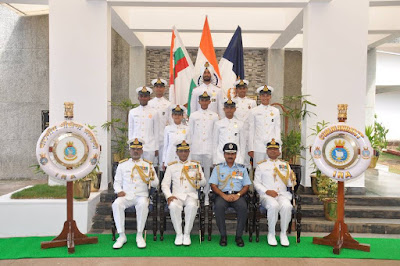 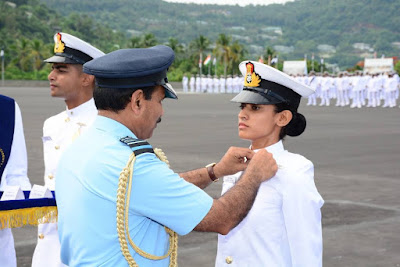 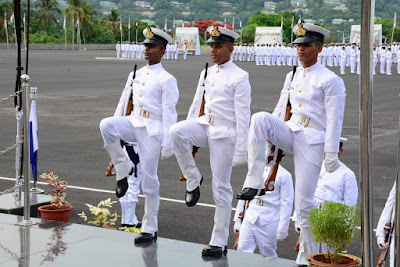 At an impressive Passing-out Parade (POP) held at the Indian Naval Academy (INA), Ezhimala here 30 May 15, 320 cadets of the Indian Navy and the Indian Coast Guard passed through the portals of the INA, on successful completion of their training.

The passing-out cadets belonged to the three different passing-out courses of the Spring Term   2015, viz., the 88th Indian Naval Academy Course (INAC) BTech and MSc courses, the 19th Naval Orientation (Extended) Course and the 20th Naval Orientation (Regular) Course.  Also graduating after marching shoulder to shoulder with their male counterparts were 28 female cadets from the Indian Navy and the Indian Coast Guard.

The parade was reviewed by the Chief of the Air Staff (CAS), Air Chief Marshal Arup Raha.  After the ceremonial review, the Reviewing Officer awarded medals to nine meritorious cadets. The Chief of the Air Staff in his address, congratulated the passing-out cadets and medal winners. He advised the passing-out cadets to turn every challenge they face into an opportunity and excel in every sphere of life and profession. He said that the high quality training imparted at INA will enable the passing-out cadets in mitigating any maritime challenge faced while ensuring energy security for the nation.  The Commandant, Vice Admiral Ajit Kumar P and many other senior naval officers, were also present at this momentous occasion.  Earlier on 27 May the Passing-Out cadets took an Oath of Allegiance at the War Memorial, Prerna Sthal, which was administered by the Deputy Commandant and Chief Instructor, Rear Admiral MD Suresh.   The Passing-out Parade was witnessed by the proud parents and guardians of all successful cadets, as well as by a large number of local and outstation dignitaries, including several Defence and Naval Attaches of friendly foreign countries.

The glittering ceremony culminated with the successful cadets forming up in two columns, and marching, with their gleaming swords held in salute, past the Academy’s Saluting Dias (known as the Quarterdeck), in Slow March, to the traditional notes of ‘Auld Lang Syne’, the poignant farewell tune played by all Armed Forces of the world when bidding adieu to colleagues and comrades. They were bid farewell by junior cadets who manned the mast as the successful cadets streamed past the hallowed quarterdeck.

On completion of the parade, the ceremony of ‘Shipping-of-Stripes’ was conducted.  The proud parents/guardians of the passing  out cadets shipped the Naval (or Coast Guard) epaulettes, popularly known as ‘Stripes’, on the shoulders of their wards, thus symbolizing their transformation from ‘cadets’ into full fledged Naval or Coast Guard Officers.  The Chief Guest and other dignitaries present congratulated the trainees and their parents on their successful completion of the rigorous course. On completion of the training at the Indian Naval Academy, the officers will now proceed to various Naval and Coast Guard ships/establishments, to consolidate their training in specialized areas.