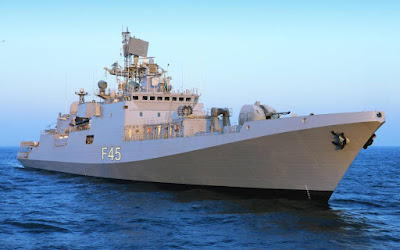 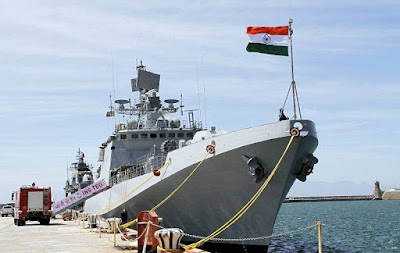 INS Teg, a stealth frigate of the Indian Navy is currently on a two-month long deployment in the South Indian Ocean with an aim to provide surveillance support in the region. This is in keeping with India's national objective of ensuring a secure and stable regional environment to allow unhindered economic and social development, not just in India, but also in the entire Indian Ocean Region. The Indian Navy, while shouldering its security responsibilities, is committed to these objectives and has been contributing in capacity building and capability enhancement of friendly foreign countries, as and when requested by them.

The ship reached  Port Victoria today and will be there from 26 Jun to 09 Jul 15 as part of its mission to carry out joint EEZ surveillance in the Seychellois EEZ in areas selected by Seychelles Coast Guard, with SCG personnel embarked onboard. The ship is also carrying items required for maintenance of SCG ships. A technical team of the ship will be providing necessary assistance for minor defect rectification on various SCG ships. Additionally, the ship's team would visit the Missionaries of Charity Old Age Home at Anse Etoile to interact with the inmates as well as provide medical support and other assistance.

The visit of INS Teg coincides with Seychelles' National Day celebrations on 29 Jun 15, in which a 25-man marching contingent and Naval Band embarked from the warship will participate in the prestigious annual military parade. The ship's integral helicopter will also undertake a fly-past during the event. This deployment adds another chapter to the strong defence and maritime cooperation between India and Seychelles.

INS Teg is a state-of-the-art guided missile frigate of the Indian Navy and is based at Mumbai. With a displacement of 4000 tons and speed of 30 knots, she is armed with the latest weapons and is capable of accomplishing a wide variety of missions. At the helm of the ship is the Commanding Officer, Captain AY Sardesai who is assisted by a team of professional and highly motivated men of the Indian Navy.