Indian Navy Gears Up For International Day of Yoga, Yoga To Be Held Across The Oceans !! 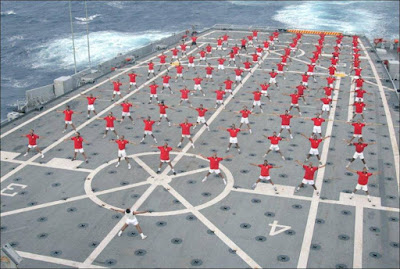 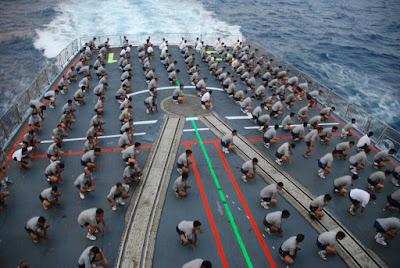 The Indian Navy is a unique microcosm of India. Motivated by the words of the Hon’ble Prime Minister of India - “Yoga is an invaluable gift of ancient Indian tradition. It embodies unity of mind and body, thought and action, restraint and fulfilment, harmony between man and nature, and a holistic approach to health and well being” - it is preparing to observe the first International Day of Yoga on 21 Jun 15 by launching multiple initiatives to introduce the practice of Yoga to its community and enable naval personnel accrue maximum benefit from it.

The Navy’s multipronged action plan to observe the event is aimed at encouraging naval personnel to translate the practise of Yoga into a way of life, with the overall intent of enabling them and their achieve harmony among mind, body, emotion and energy and lead healthy and happy lives.

The naval community has been sensitised to the conduct and significance of the first International Day of Yoga through a message relayed widely to units at dispersed geographical positions in India and overseas. Accordingly, Indian Navy units located as far as the Mediterranean Sea on the West, the Western Pacific Ocean on the East and the Southern Indian Ocean in the South will participate in observing the occasion – and with a unique design! Widely dispersed ships of the Navy will conduct Yoga sessions that commence at the pre-decided local time of 7:00 AM (the exact time at which the occasion will be observed at Rajpath, New Delhi), such that as the sun moves across time zones in its passage from the Pacific Ocean to the Mediterranean Sea, it will find personnel of the Indian Navy greeting it successively with their asanas across a vast geographical swath!

Other events planned at all naval units, including Navy schools, community facilities and welfare centres will comprise mass participation of personnel in basic asanas, which will be followed by qualified Yoga instructors expounding to the community on the long term benefits of Yoga. Handouts with descriptions of basic Yogasanas derived from the document “Common Yoga Protocol” issued by the GoI will also be distributed in large numbers. To encourage children of all ages to be part of the event, painting and essay writing competitions are being organised at all naval schools.

While the activities planned on 21 Jun 15 aim to generate and enhance awareness on the benefits of Yoga in the naval community, the action plan also includes activities that will be pursued in a sustained manner over the long term. These include inclusion of Yoga exercises during morning Physical Training routines in ships and establishments; training and accreditation of Physical Training Instructors and other volunteers as Yoga Guides/Instructors; and conducting programmes at various levels of Yoga proficiency. Efforts are also in place to include Yoga modules in the curriculum of training institutions and establish Yoga Centres at naval Stations across the country.

With this multipronged plan, the Navy will observe the first International Day of Yoga and celebrate the richness of Indian culture through a unique endeavour that only it can - Yoga across the Oceans.