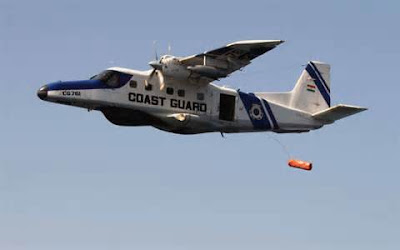 The Coast Guard Dornier aircraft CG-791 deployed for surveillance along the Tamil Nadu coast and Palk bay from the Coast Guard station Chennai, last evening failed to return to Base.The last contact with the aircraft was about 2100 hrs and Trichy radar tracked the aircraft till 2123 hrs in position 95 NM south of Chennai (Off Karaikal). The aircraft is the latest induction in the Coast Guard inventory in 2014 and was being flown by highly experienced crew.

On receipt of the information, massive search and rescue efforts have been launched by utilising all available surface and aircraft of the Indian Coast Guard and Indian Navy. Five Coast Guard ships, 4 Naval ships along with ICG and Indian Navy aircraft including long range maritime surveillance aircraft P8i are undertaking SAR ops in the area.

The Coast Guard is closely monitoring the progress of search and rescue efforts.