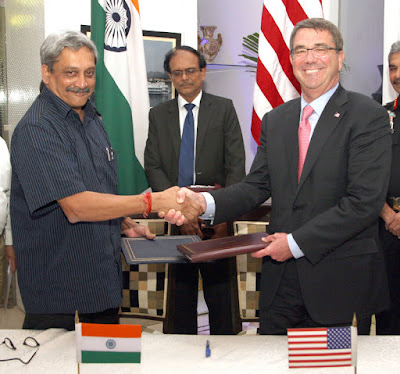 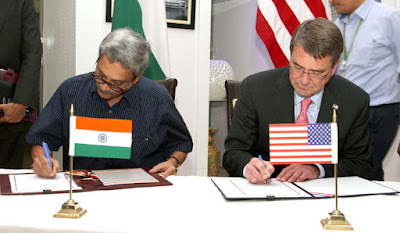 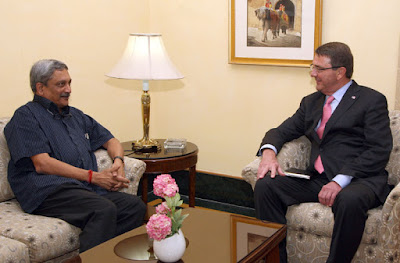 Raksha Mantri and Secretary Carter discussed the India-U.S. defence relationship, and the broader India-US Strategic Partnership, and reaffirmed their commitment to expand and deepen the bilateral defence relationship. The two also reviewed the existing and emerging regional security dynamics.

Raksha Mantri and Secretary Carter signed the 2015 Framework for the India-US Defence Relationship, which builds upon the previous framework and successes to guide the bilateral defence and strategic partnership for the next ten years. The new Framework agreement provides avenues for high level strategic discussions, continued exchanges between armed forces of both countries, and strengthening of defence capabilities.

The Framework also recognizes the transformative nature of the Defence Technology and Trade Initiative (DTTI). Both India and the United States have finalized two project agreements for joint development of Mobile Electric Hybrid Power Sources and the Next Generation Protective Ensembles.

In addition, building on the areas of agreement during President Obama’s visit to India in January 2015, Raksha Mantri and Secretary Carter agreed to expedite discussions to take forward cooperation on jet engines, aircraft carrier design and construction, and other areas. The two also agreed to pursue co-development and co-production projects that will offer tangible opportunities for American defence industries to build defence partnership with the Indian industries including in manufacturing under ‘Make in India’.

Raksha Mantri and Secretary Carter agreed to continue their efforts to enhance bilateral cooperation in areas of mutual interest, such as maritime security and knowledge partnership in the field of Defence.

Secretary Carter thanked Raksha Mantri for the help extended in the search for the US helicopter which went missing during the relief operations in Nepal.