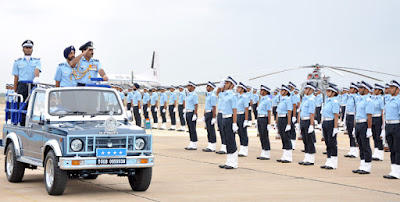 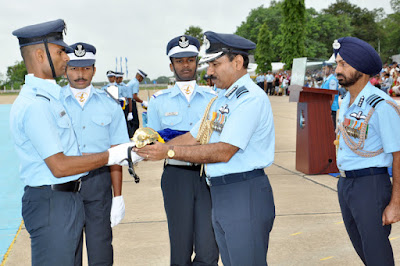 The amber sky dawned sagely over Air Force Academy to witness the grand Combined Graduation Parade, which marked the momentous occasion of the passing out of 207 Flight Cadets as Flying Officers including 43 women officers to join the crème-de-la-crème of the IAF, to carry forward the espoused legacy and the core values of ‘Mission, Integrity, Excellence’ with élan. This solemn event was graced by the Chief of Air Staff, Air Chief Marshal Arup Raha PVSM AVSM VM ADC, as the Reviewing Officer. He conferred the President’s Commission to the Flight Cadets who have successfully completed their basic and professional training at Air Force Academy, Air Force Station Hakimpet, Air Force Station Begumpet, Air Force Station Yelahanka and Air Force Administrative College (Coimbatore). This training phase culminated in a grand ceremony with a scintillating Combined Graduation Parade on the tarmac facing the Sekhon Block at the Air Force Academy. The newly commissioned officer will join in their respective fields in Flying, Navigation and Ground duty branches.

The Reviewing Officer was accorded a salute by the parade followed by an impressive March Past. The highpoint of the parade was the ‘Pipping ceremony’. The Flight Cadets were awarded their stripes by the Reviewing Officer, the Air Officer Commanding-in-Chief, Training Command and Commandant, Air Force Academy. They were then administered the oath by the Commandant of the Academy in the presence of the Chief Guest and other dignitaries. Air Chief Marshal Arup Raha gave away various awards to the flying officers who have excelled in training. Flying Officer Himanshu Kanwar from the Flying Branch was awarded President’s Plaque and the Chief of the Air Staff Sword of Honour for standing first in Overall Merit in Pilot Course. Flying Officer Saurabh Sharma and Flying Officer Shivaank Rana were awarded President’s Plaque for being first in Overall Merit in Navigation and Ground Duty branch respectively.

Addressing the cadets, the Air Chief Marshal Arup Raha complimented the Flying Officers for the exceptional standard of parade. Articulating India’s need and priorities in the emerging international scenario, he reiterated the important role of the Armed Forces. In this context IAF, as a reckonable aerospace power, would permeate the national security apparatus more intrinsically, given India’s significantly enhanced stature and responsibilities. He stated that, while there is an urgent need to leverage technologies and systems, it is also imperative that these are converted into ‘capabilities’ by people. He stressed on the need that the IAF should aim for greater specialisation and tailored capabilities amongst its men and women, as it absorbs newer and more advanced technologies. Earlier, the Reviewing Officer was received at the venue by Air Marshal Ramesh Rai, Air Officer Commanding-in-Chief, Training Command and Air Marshal GP Singh VM, Commandant, Air Force Academy.

The parade was culminated with the newly commissioned officers marching-out from behind the fort wall, in slow march to the poignant notes of ‘Auld Lang Syne’ acknowledging the first salute given them by their immediate juniors.

The large gathering of military and civil dignitaries along with the family members and friends of the graduating Flight Cadets were held spellbound throughout the impressive parade. The grand Graduation Parade culminated with awesome display by the fiery aerobatic display by the PC 7 MK II (the aircraft currently used in AFA to train pilots) and the Sarang Helicopter team display.

The combined graduation Parade is a portentous day heralding the birth of another generating of fine Officers in the IAF. The Flight Cadets undergo professional and advanced training and finally pass-out together from the portals of the majestic “Sekhon” Block of Air Force Academy. The graduating Flight Cadets marched-in onto the tarmac with impeccable turnout and impressive drill movements, demonstrating the conviction and commitment that they hold. Subsequently, a specially chosen group of Flight Cadets brought-in the ‘President’s Colours’ of the Academy. The President’s Colours is a symbol of excellence, awarded to the Academy in 1975 as a tribute to the dedication and worthy contribution, both during peace and war; it marks and depicts the hard work, valor and sacrifice of all the personnel posted to the Academy.

The Air Force Academy is the premier training establishment of IAF. It is veritably the ‘Cradle of Inspired Leadership’, as it undertakes the onerous task of transforming civilians to Air Warriors and creating an elite cadre of Officers.