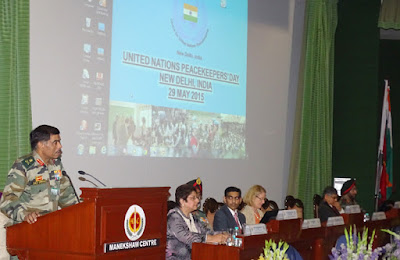 Centre for United Nations Peacekeeping (CUNPK) celebrated the UN Peacekeeping Day on 29 May 2015 at the Manekshaw Centre in Delhi Cantt. Lt Gen Philip Campose, the Vice Chief of Army Staff was the Chief Guest at the function. The event is part of the worldwide celebrations undertaken on the day to commemorate all brave men and women who have contributed towards establishing peace and security in the war torn countries and ravaged societies across the world.

The officials acknowledged the contribution of the Indian Armed Forces in about 50 peacekeeping missions across the world and remembered all those valiant soldiers who laid down their life in the line of duty at a place away from their homeland. The event was marked by a seminar on issues pertaining to peacekeeping and its Challenges in Today’s Dynamically Changing World. Various dignitaries including Lt Gen I S Singha, Lt Gen Satish Nambiar (Retd), Lt Gen RK Mehta (Retd), Ms Rebecca Tavares from UN Women and Mr Munu Mahawar , JS (UNP) Division were also present on the occasion.

Speaking at the occasion, Lt Gen Philip Campose said that the entire peacekeepers’ fraternity had a singularity of purpose that was aimed at ensuring international peace and security. He further said that nature of conflicts was changing at a rapid pace and everyone had to evolve, adjust and modify to suit the requirements of such complexities of time and space. He also applauded the efforts of CUNPK in this direction and commended its efforts for training officers of Indian and foreign diasporas.

India began its tryst with UN Peacekeeping by providing the Custodian Force in Korea, 1950. It is worth mentioning that the Indian Army is among the top three contributors to UN Missions.

Virtual Memorial Wall honouring Indian peacekeepers who laid down their lives during UN Peacekeeping Operations, launched at United Nations on the commemoration of International Day of UN Peacekeepers 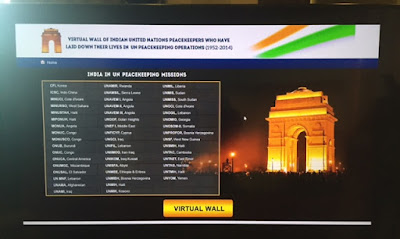 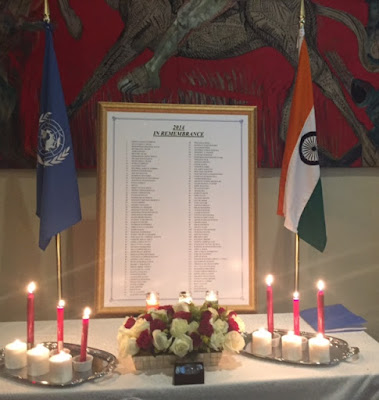 To commemorate the International Day of United Nations Peacekeepers on 29th May, 2015 the Permanent Mission of India to UN hosted a somber function for all the recipients of the 125 Dag Hammarskjold Medals awarded this year by the United Nations.

Ambassador Asoke Kumar Mukerji, Permanent Representative of India to United Nations welcomed the awardees and read out Hon’ble External Affairs Minister of India’s message on the UN’s commemoration of International Day of Peacekeepers.

Full text of Hon'ble External Affairs Minister’s message on the commemoration of International Day of UN Peacekeepers is placed below at Annex-I.

During the commemorative function a unique initiative was undertaken by the Indian Mission to UN, whereby a Virtual Memorial Wall was launched and dedicated to those Indian troops who gave their lives while doing active service as UN peacekeepers.

The wall of honor includes details of 161 Indian peacekeepers who made the supreme sacrifice in 16 UN Peacekeeping Missions so far. The Virtual Wall, launched on the occasion of the International Day of UN Peacekeepers on 29 May 2015, will be hosted on the website of the Permanent Mission of India to the United Nations (www.pminewyork.org)

In order to keep their memory alive, and to highlight the significant contribution these dedicated professional troops have made to the objectives and purposes of the United Nations Charter, the Permanent Mission of India to the United Nations has been actively engaged in enhancing the commemoration of the International Day of UN Peacekeepers on 29 May every year.

Two years ago, on 29 May 2013, to mark the 10th anniversary of the International Day of UN Peacekeepers, the Permanent Mission of India to the United Nations had organized a photo exhibition showcasing the historical origins of India’s UN peacekeeping participation and scenes from the various areas of operation where Indian peacekeepers have been deployed over the past 60 years.

On 2 October 2014, Her Excellency Smt. Sushma Swaraj, External Affairs Minister of India, became the first foreign minister from any member state of the United Nations to place a wreath at the UN Peacekeepers Memorial in New York.