Naval Base At Porbandar Commissioned As INS Sardar Patel 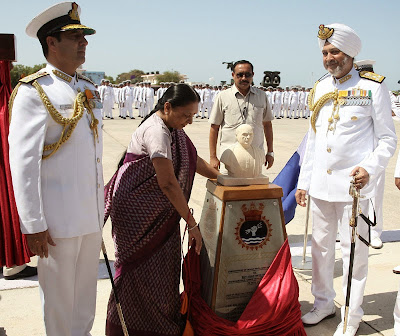 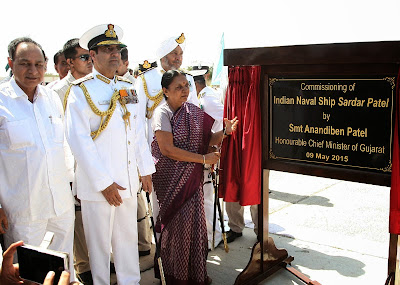 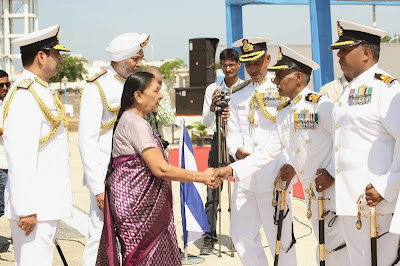 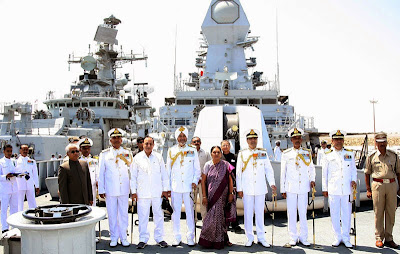 'Sardar Patel', the latest Naval establishment of Indian Navy, was commissioned at Porbandar, Gujarat by Smt. Anandiben Patel, the Hon'ble Chief Minister of Gujarat today 09 May 15. The commissioning ceremony was attended by Admiral RK Dhowan, Chief of the Naval Staff, Vice Admiral SPS Cheema, Flag Officer Commanding–in–Chief, Western Naval Command, senior naval officers and other dignitaries of the state government. The event marked yet another important milestone in the Navy's efforts to augment the security infrastructure in the coastal states and islands.

The commissioning ceremony was marked by traditional gaiety and naval precision. As a part of the ceremony, the Hon'ble Chief Minister named the establishment INS Sardar Patel , after Sardar Vallabhbhai Patel, the first Home Minister of India and unveiled the commissioning plaque as well as a marble bust of the “Ironman of India”.  Commodore BR Prakash, Commanding Officer, read out the Commissioning Warrant and the naval ensign was hoisted as the Western Naval Command band played the national anthem.

Speaking on the occasion, Admiral RK Dhowan, Chief of the Naval Staff, noted that the commissioning of a full-fledged naval base Sardar Patel was another milestone in the commitment of the Indian Navy towards augmenting the coastal surveillance and maritime security infrastructure in the strategically important state of Gujarat. The Admiral also complimented the crew of the INS Sardar Pateland exhorted them to do their best in discharge of their responsibilities.

Addressing the gathering, the Hon'ble CM of Gujarat highlighted the maritime heritage of the State of Gujarat, which traces its origin to the Harappan civilization. She brought out that the economic development of Gujarat was intrinsically linked to the sea. She acknowledged the Indian Navy's role towards ensuring India's maritime security and brought out that the State Govt of Gujarat will provide all support to the Navy in their quest for strengthening coastal and maritime security.

The commissioning of INS Sardar Patel at Porbandar would enable the Indian Navy to qualitatively augment its infrastructure and organisational effectiveness in the State of Gujarat, which would improve coordination and synergy with other maritime agencies of the Government. This Forward Operating Base (FOB) of Indian Navy in Gujarat and the Headquarters of the Naval Officer-in-Charge (Gujarat, Diu & Daman) would also enhance the logistic support being provided to the Indian Navy units deployed in the Northern Arabian Sea, including along the International Maritime Boundary Line with Pakistan.

Gujarat has a coastline of 1600 km interspersed with 43 ports. Of these, besides Kandla being a major port, 11 are intermediate and 31 are minor ports. In addition, there are 12 single point moorings (SPMs) in the Gulf of Kutch. Presently 120 million tons, i.e. 71% of the country’s oil and 73% of gas is imported though the Gulf of Kutch, which is only steadily increasing. The ports of Gujarat handle 300 million tons of cargo annually, which is 43% of the total maritime trade handled by the various ports of India. In addition, the industrial development of Gujarat, with its high maritime component and considerable industrial infrastructure on seafront, makes it vulnerable from sea not only during hostilities but also during peacetime. The economic importance of this frontal maritime state, in the overall national security dynamics, is the core factor governing sustenance and operation of naval assets from the Forward Operating Naval base at Porbandar.

The events of 26/11 have added a new dimension to the coastal security construct, which has enhanced responsibility, and need for continued naval presence in this area. The commissioning of INSSardar Patel and augmentation of infrastructure and assets will provide the necessary impetus to meet this role.

The name Sardar Patel has been aptly chosen to signify the role of Shri Vallabhai Patel, the first Deputy PM and Home Minister of India, Sardar Patel popularly known as the Ironman of India, was a towering personality from Gujarat and one of the founding Fathers of the Republic of India. He was responsible for forging a united India from the British colonial provinces allocated to India and more than five hundred self-governing princely states, released from British suzerainty.