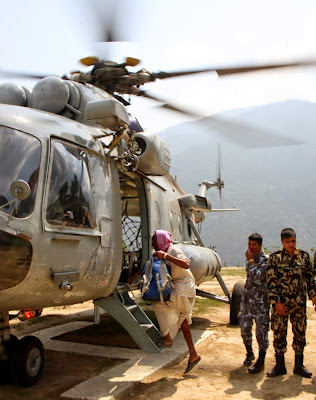 On 25 Apr 15, a massive earthquake struck Nepal. Close to the Langtang helipad was a post of the Nepalese Army consisting of 10 Army personnel. After the earthquake all the ten were untraceable. Although, a mission was carried on 06 May 2015 out to retrieve the bodies, they could not be identified due to injuries and decomposition.

On 23 May 15, a special airlift by an IAF Mi17 V5 helicopter was arranged for Next of Kin(NOK) and Close relatives of the deceased persons to visit the remains of the post and pay homage. Fourteen relatives and two escorts were taken to Dhunche. From there, seven of them were flown to the place where the post was manned prior to the earthquake to pay homage. The helicopters remained with rotors on idle power and returned in 15 mins time with the people who had tears in the eyes. They also brought back small belongings of the deceased and soil. They boarded the helicopter and were brought to Dhunche. Similarly, another Seven Next of Kins were taken to the same place and back. This load limitation was due to the altitude of landing. Group Captain Basant B Pande was on board in the first trip and Major Sandesh Rokde was onboard the second trip. 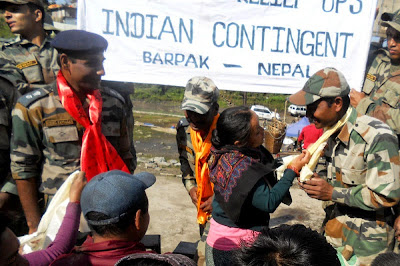 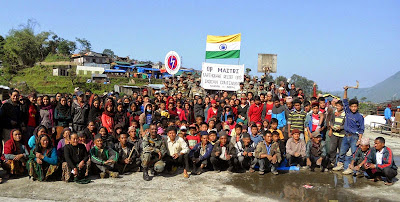 The Indian Army continues to provide aid to affected population and areas in close coordination and cooperation with the Nepal Army.

Two Army Aviation Advanced Light Helicopters have de inducted while three helicopters continue to be employed towards disaster relief operations in Nepal and have conducted 12 sorties yesterday and transported 44 people apart from assisting in induction of Nepal Army Troops to affected areas.

The Indian Army Field Hospitals and the medical teams have de-inducted completely with the last elements having de-inducted yesterday after having provided essential care to 4690 people including over 300 surgeries and 216 admissions during their deployment in Nepal.

The ETFs demolished a damaged house and an RCC wall yesterday and have cleared approximately 95 meter of track and  another 290 cubic meters of debris in close cooperation with Nepal authorities. The Indian Army ETF at Barpak has been relocated to Kathmandu. This team was established at Barpak, close to the epicenter, post the earthquake of 25 Apr. The locals of Barpak gave a traditional farewell to the Lt Col Nikhil Sankaran and his team for providing yeoman service  during their deployment  in Barpak.