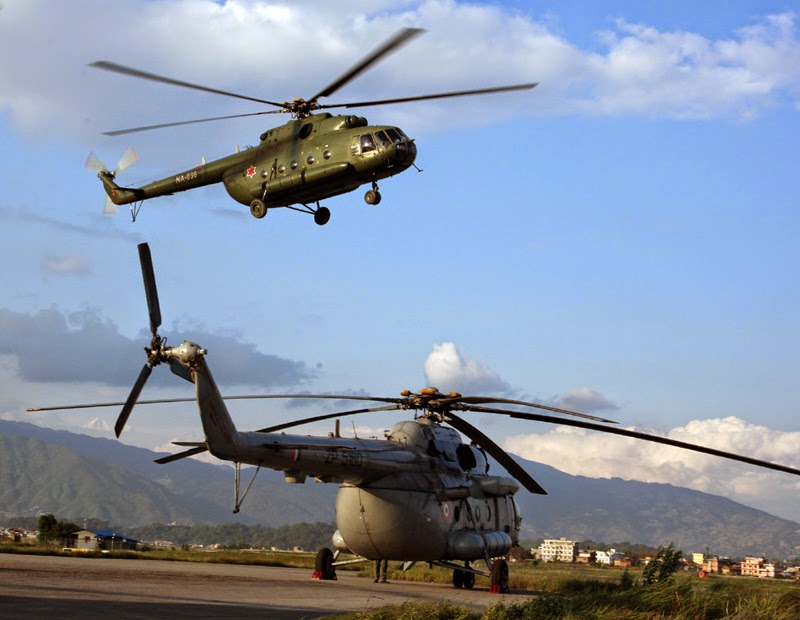 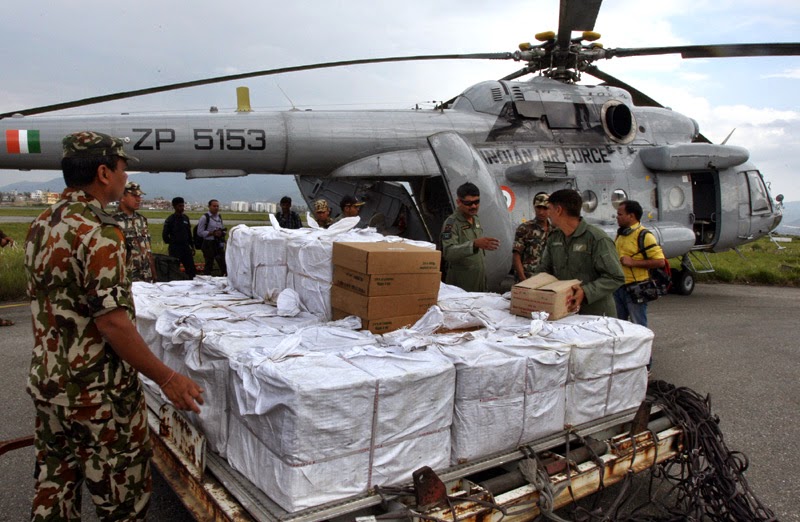 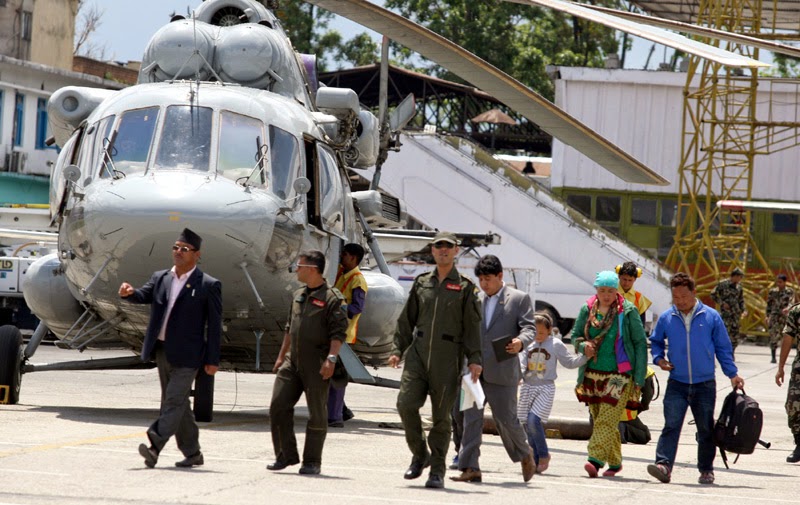 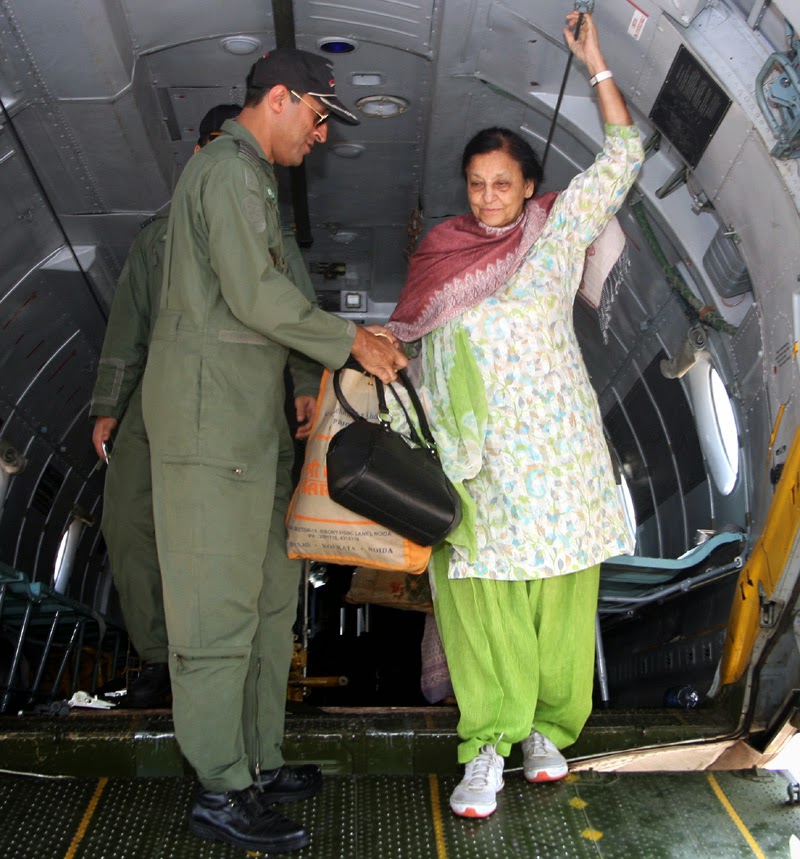 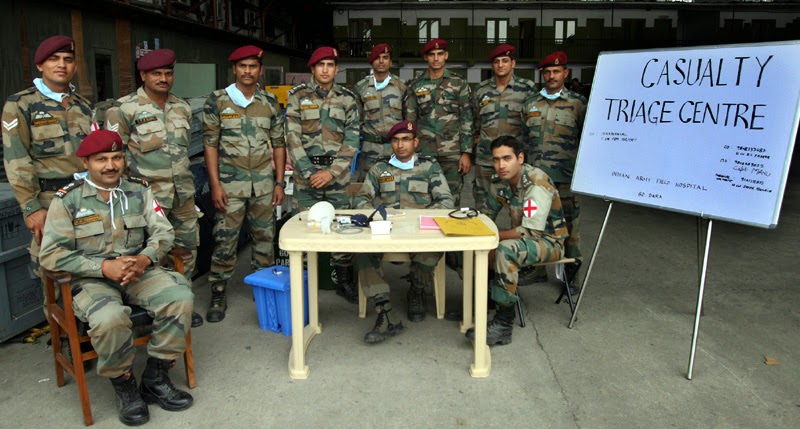 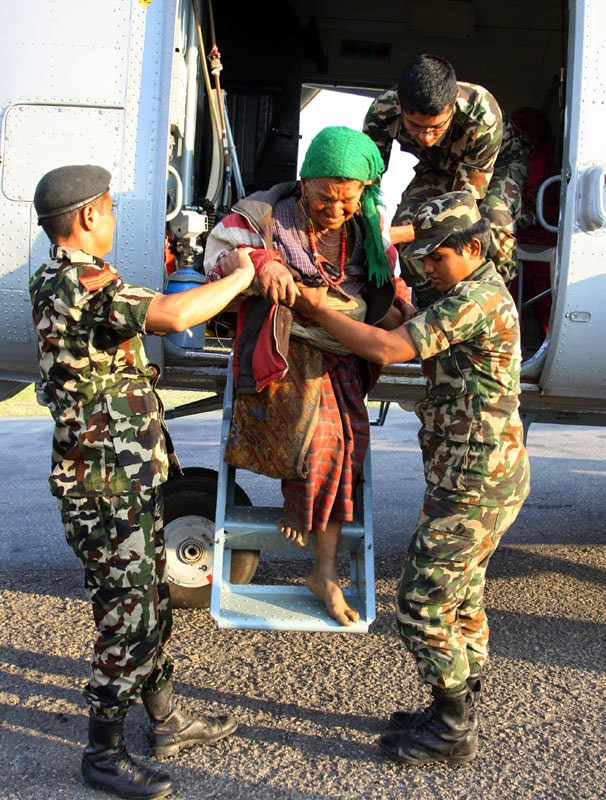 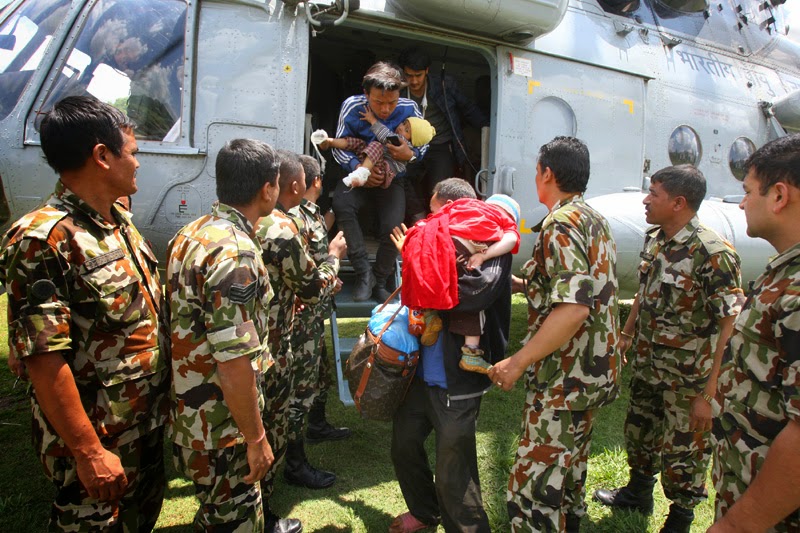 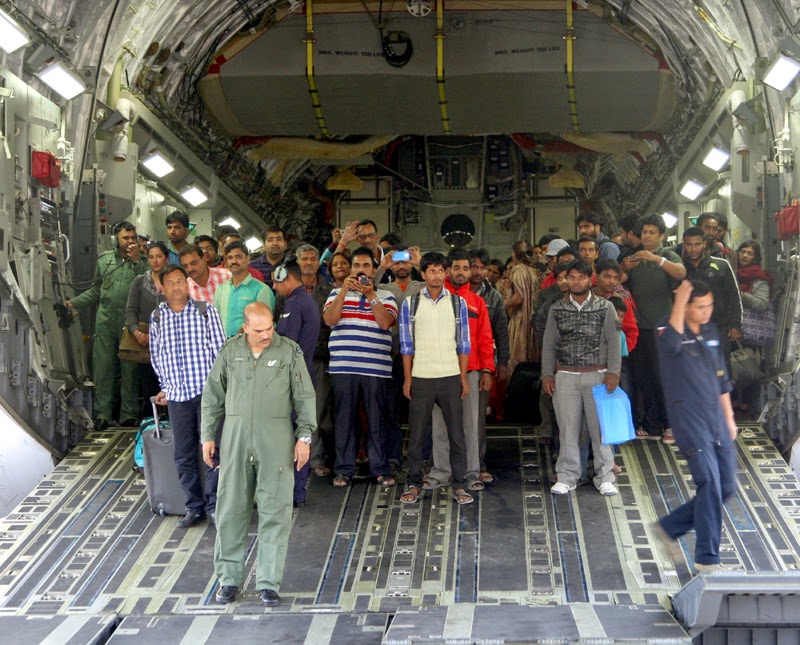 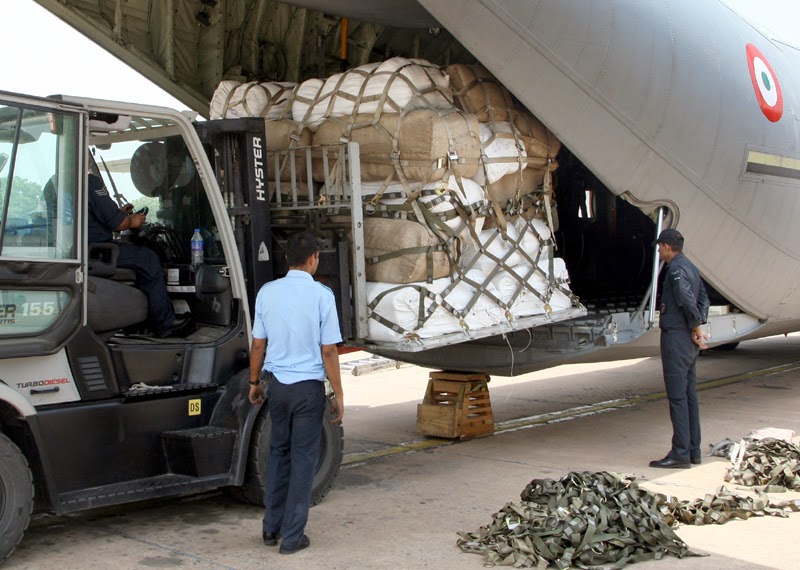 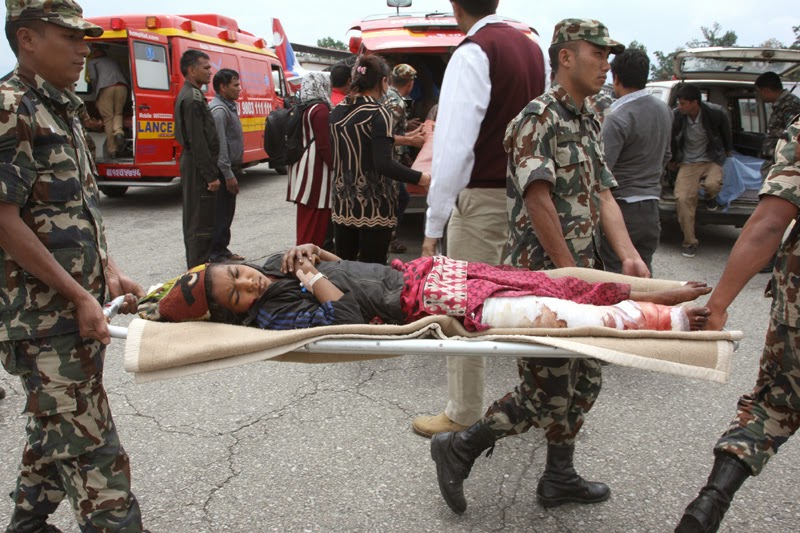 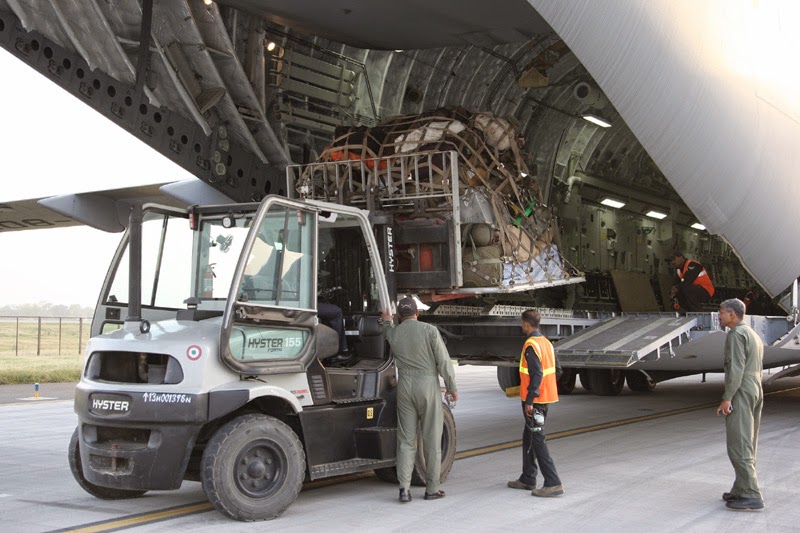 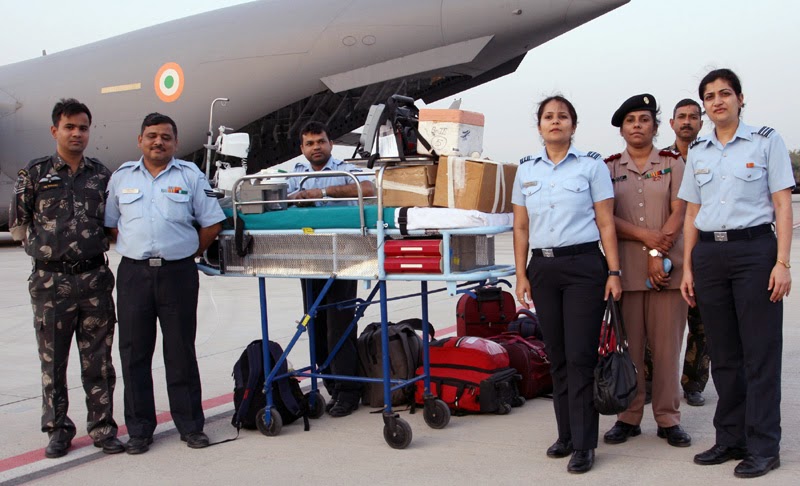 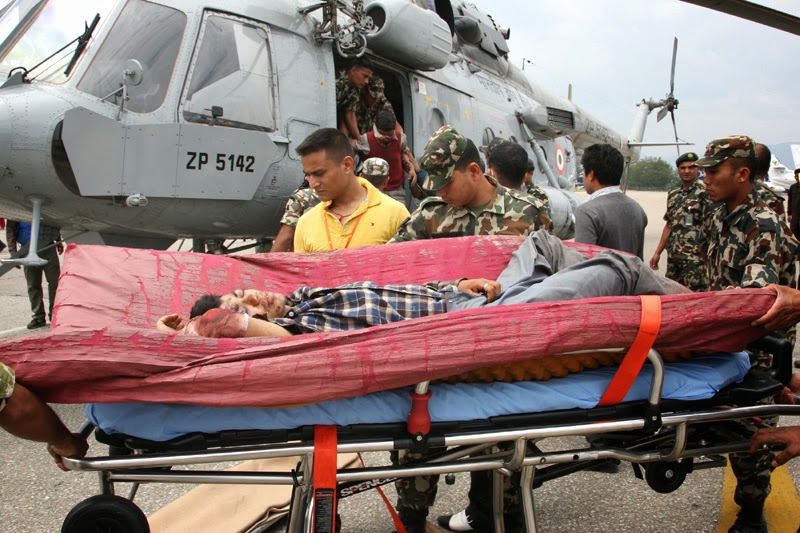 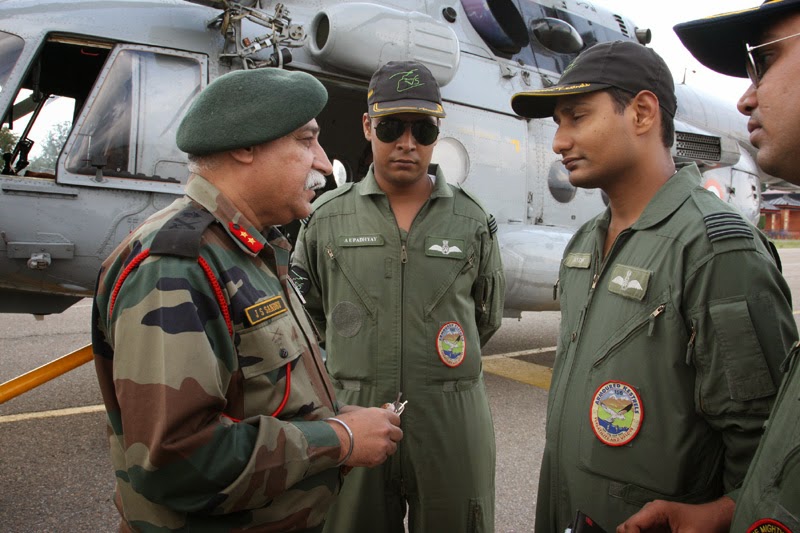 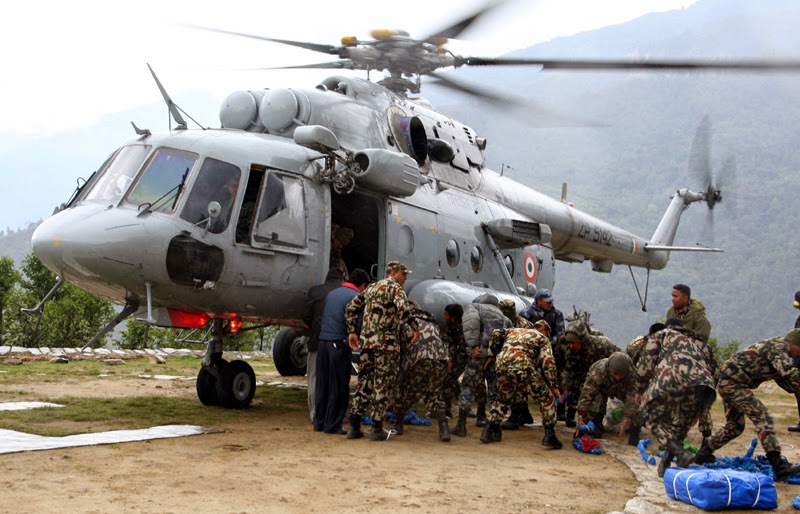 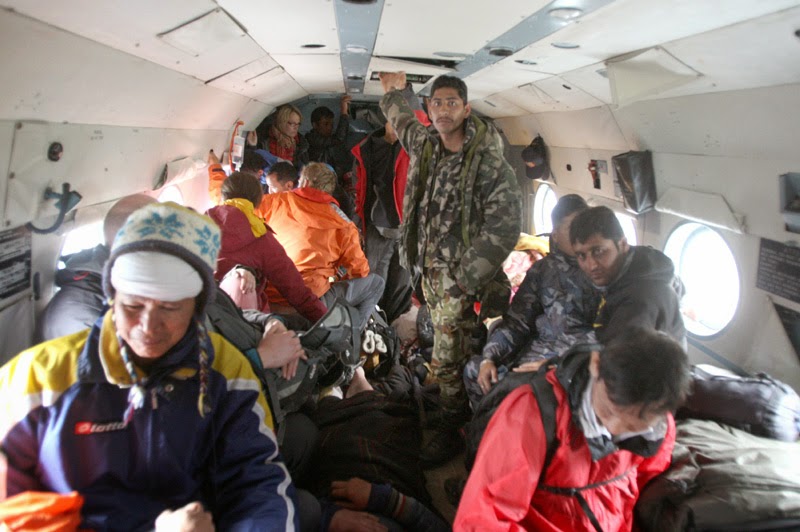 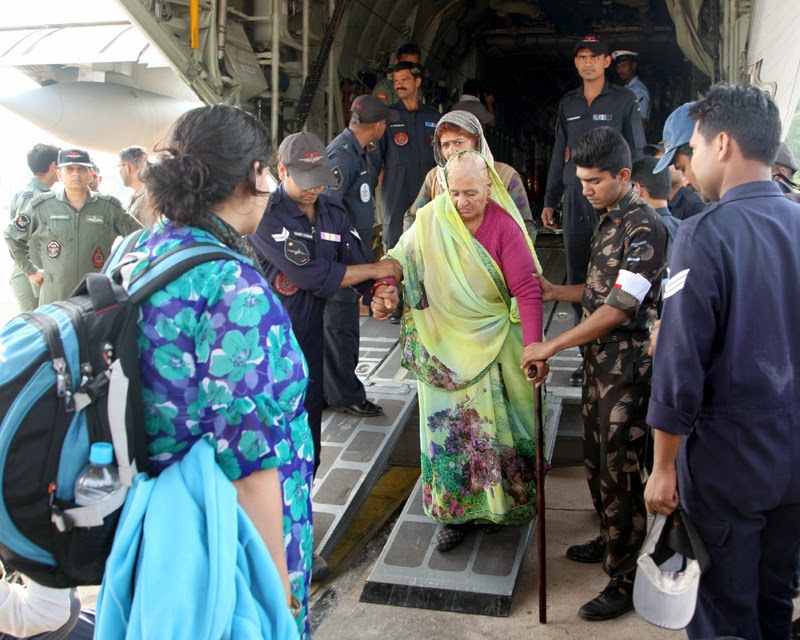 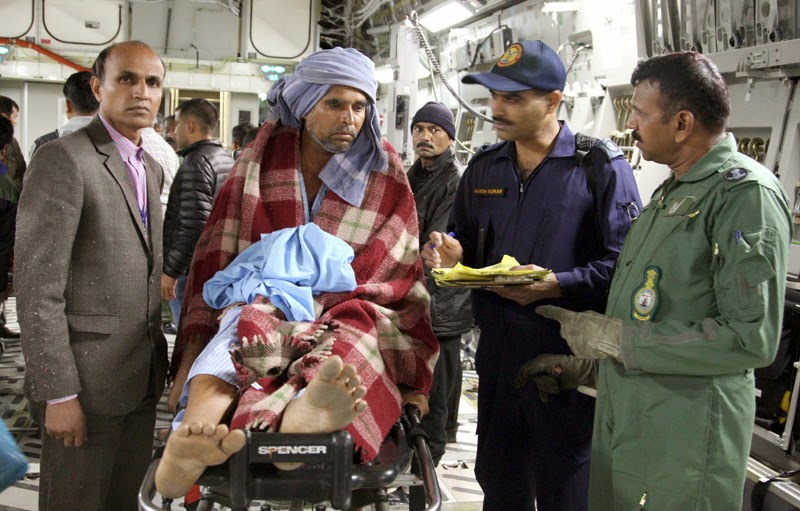 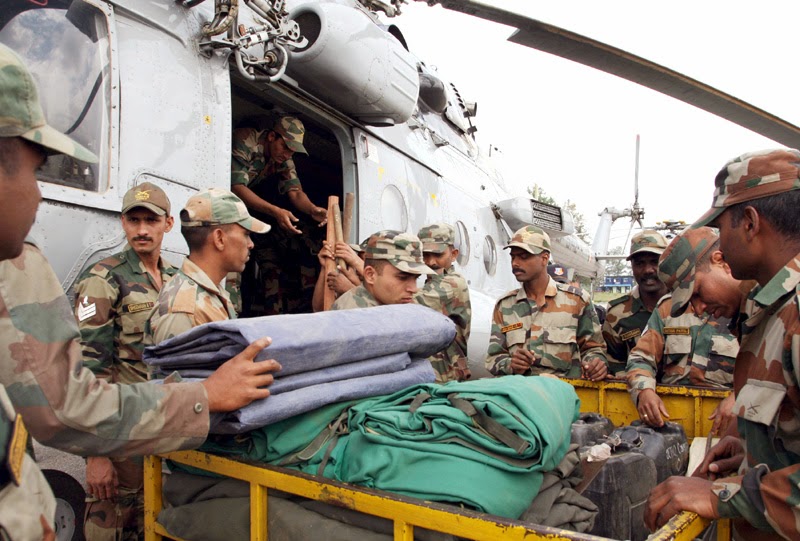 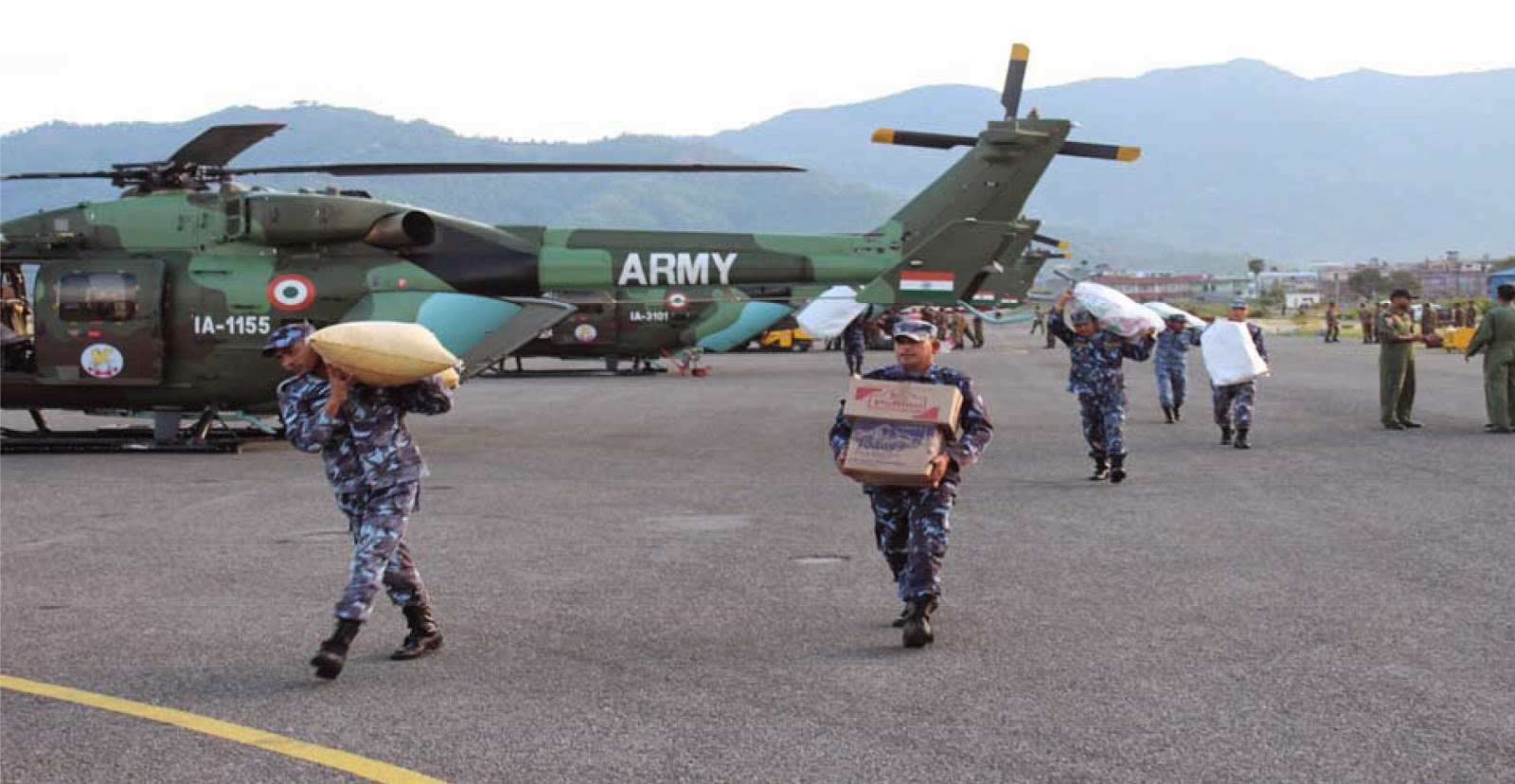 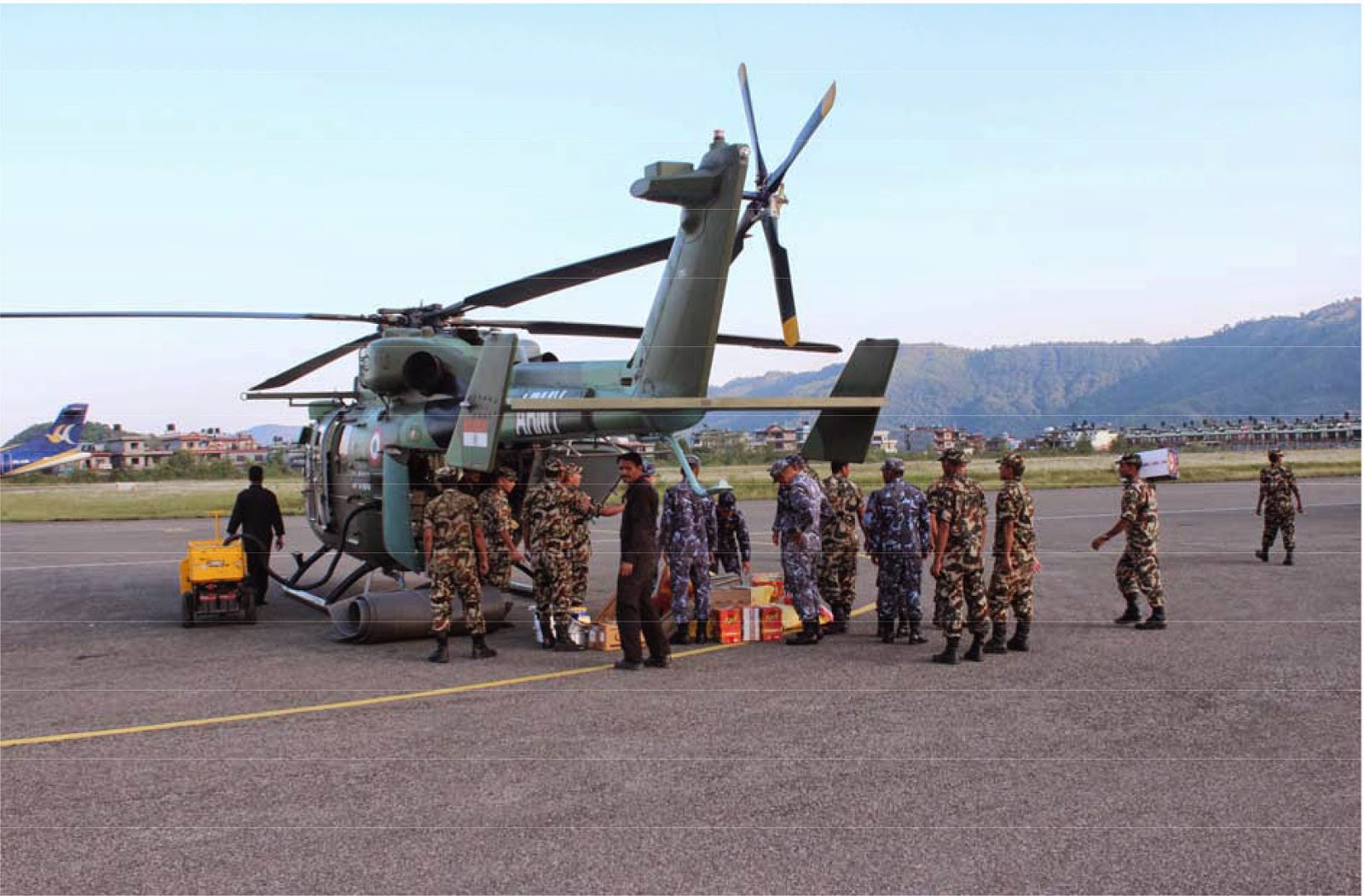 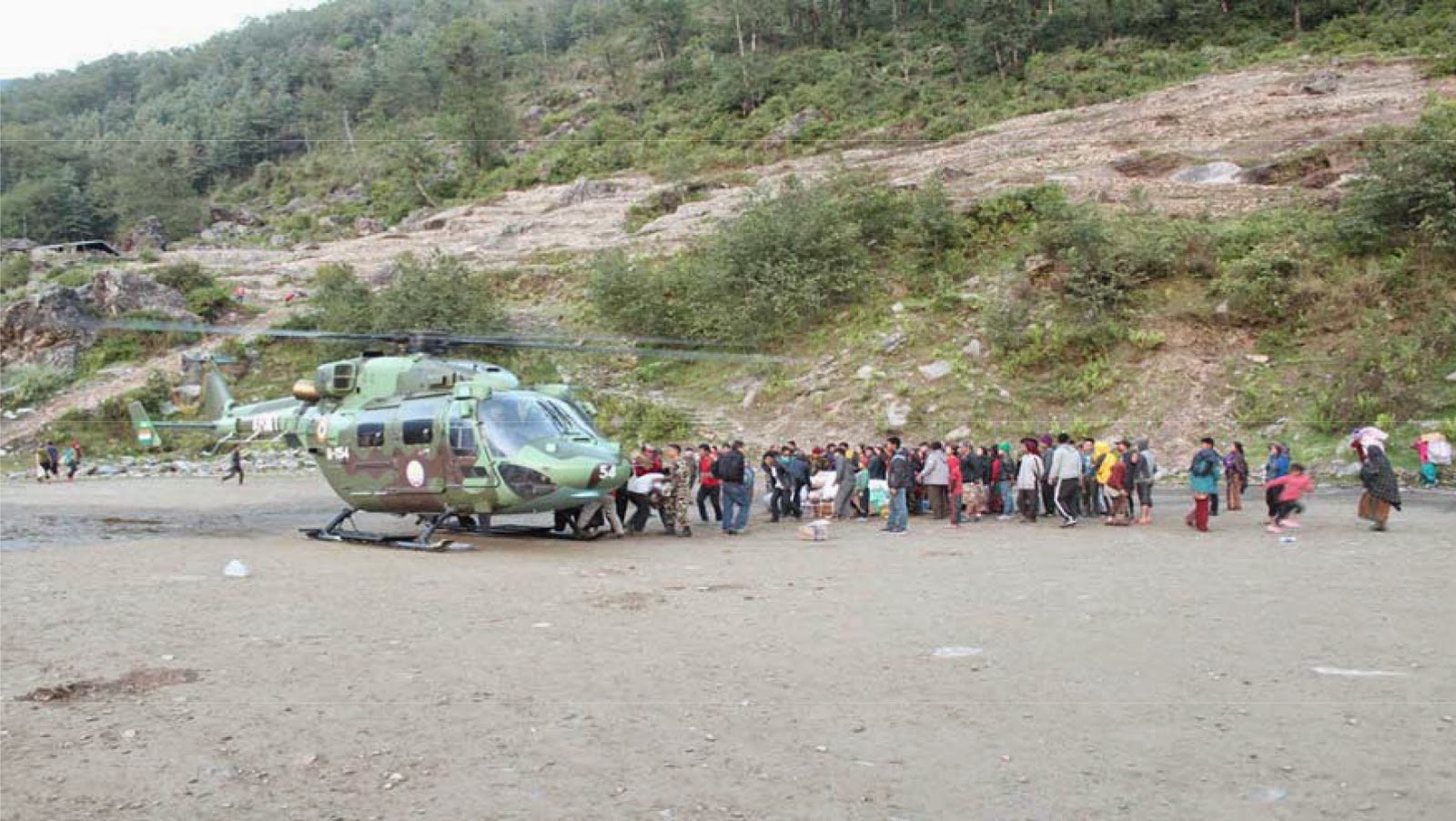 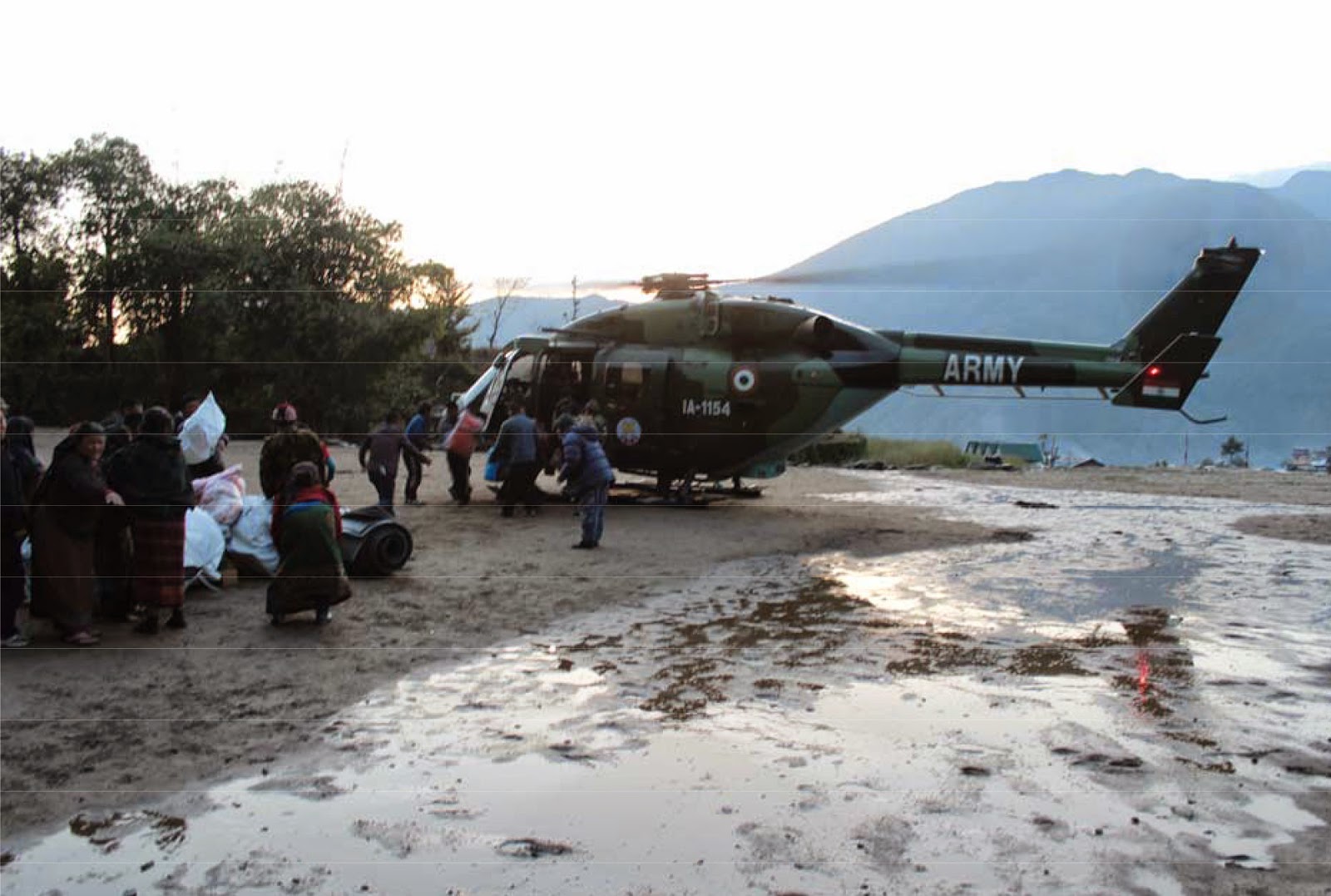 As part of the ongoing operations, Indian Army(IA) aviation helicopters reached out to far flung areas to deliver necessary relief material and the medical teams worked around the clock attending to the needy. Army Relief convoy is also moving by road towards Pokhara.

(a)  Four Army Aviation Helicopters in location have evacuated 34 people (including 25 women and children and 11 x stretcher based casualties) from the area north of Gorkha. A total of 3.8 tonnes of relief material has been distributed till 28 Apr 15. 110 people have been rescued by army aviation in rescue operations from Pokhara. In addition, one Army ALH and two Cheetah helicopters are standby at Gorakhpur.

(b) Three Army Field Hospitals which include two Field Hospitals at Lagaankhel and one at Senamangal have been established.  Two Medical Teams out of these are located at Barpak. A large number of patients have been treated so far.

(c)  A total of three Engineer Task Forces have been inducted into Nepal. The Engineer teams at Barpak are opening roads to establish road communication.

(d) Vehicle convoy from Kanpur is reaching Pokhara with 5,000 blankets, 500 tents, 50 tarpaulins and 800 plastic sheets. Another team has moved by road from New Delhi to Pokhara with 7.2 tonnes of relief stores and has presently reached Lucknow.

IA’s Everest Expedition team continues to be located at Everest Base Camp.

Stepping up efforts to help Nepal which was struck by severe earthquakes, the IAF is providing relief to the people in distress across Nepal including remote and inaccessible areas. Since 25 April 2015, the IAF has airlifted a total of 3193 persons, flying a total of 48 fixed wing sorties by C-17 Globemaster III, IL-76, C130J Super Hercules and AN-32 aircraft landing a total of 314.6 tonnes of relief material and equipment. 951 persons have been inducted for relief purposes into Nepal so far.

Today, a C-130J aircraft made a landing in a very short airstrip at Pokhra successfully. It carried six tonnes of food and water. A C-130J with 55 tents and 1630 blankets and another C-130J with 14 tonnes of water, food and medicines was sent to Kathmandu. Two AN-32s with 2.5 tonnes of food and water were sent to Pokhra. 14 passengers were evacuated by C-130J to Delhi.. One IL-76 with 28 tonnes of water was sent to Nepal. 15 passengers and 7 mortal remains were evacuated by the IL-76.

A total of 08 IAF Medium Lift Helicopters (MLH) are positioned in Nepal out of which 06 are at Kathmandu and 02 at Pokhra which are doing extensive rescue and relief operations. 40 sorties by MLH were carried out today which amounts to 150 sorties cumulatively. 100 casualties have been evacuated by these helicopters progressing to 205 casualties. 20 tonnes of relief material have been provided, thus amounting to 30.3 tonnes cumulatively. 100 people have been inducted (medical and Nepalese army troops) and 150 evacuated to safer places amounting to 1000 persons evacuated so far by these helicopters.

It would be pertinent to note that transport and helicopter aircraft are being utilised extensively for Human Assistance Disaster Relief (HADR) operations. The Indian Air Force, after proving its mettle in bringing succor to scores of people after Yemen evacuation this month, Jammu & Kashmir in September last year, has once again risen to the occasion and added a pioneering chapter in Disaster Relief by bringing relief to the needy and evacuate them from earthquake hit areas in Nepal. The Indian Air Force reaffirms its commitment towards Humanitarian Assistance and Disaster Relief Operations in support of the nation.