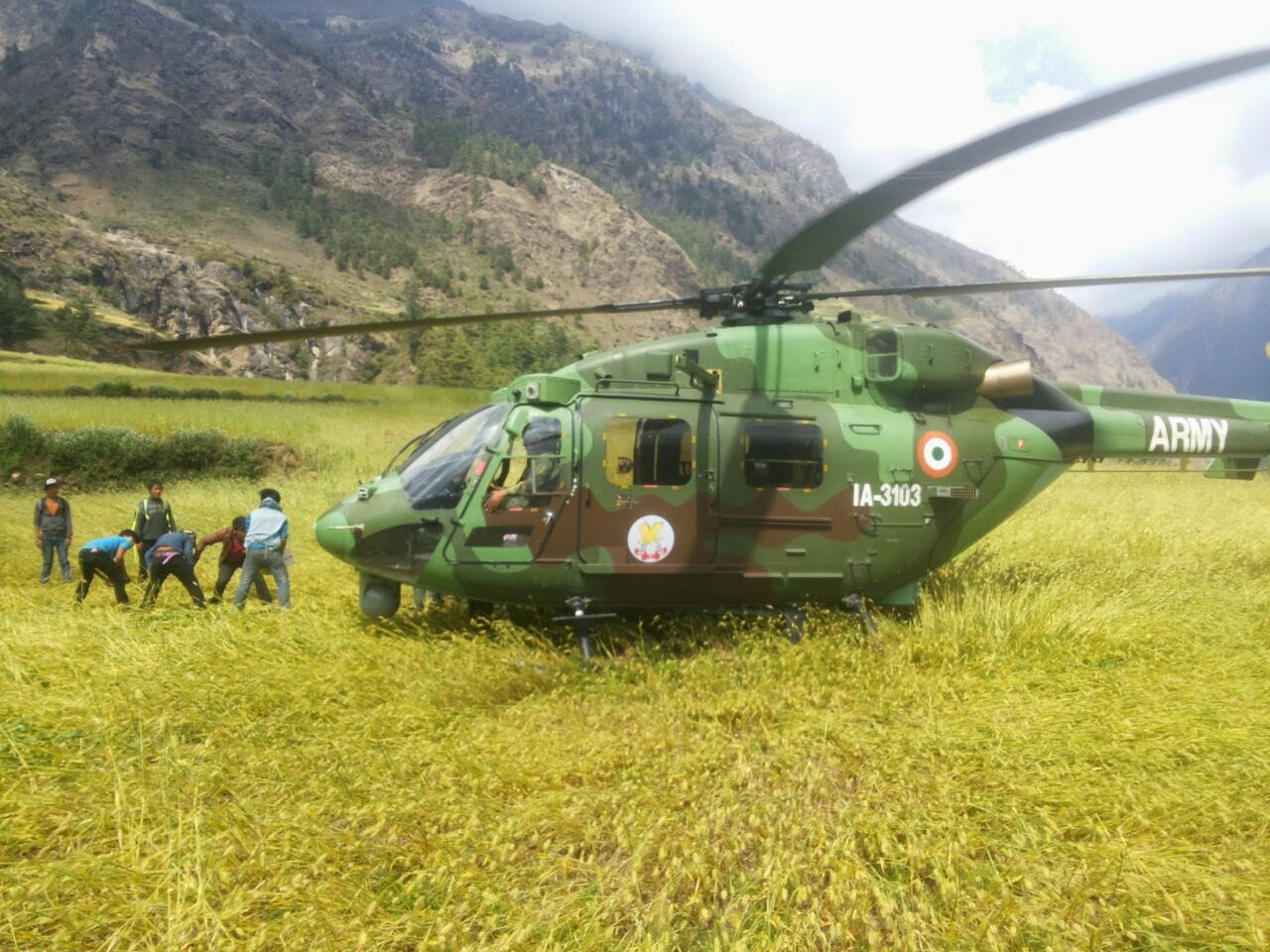 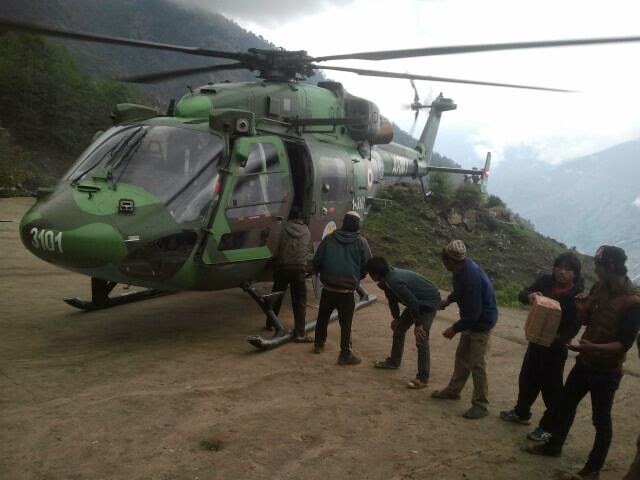 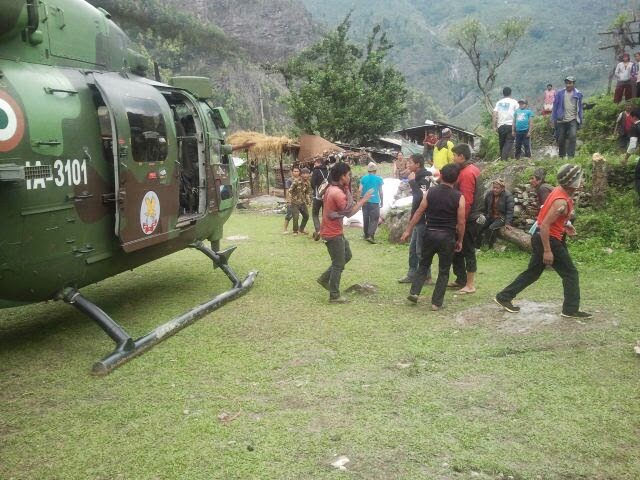 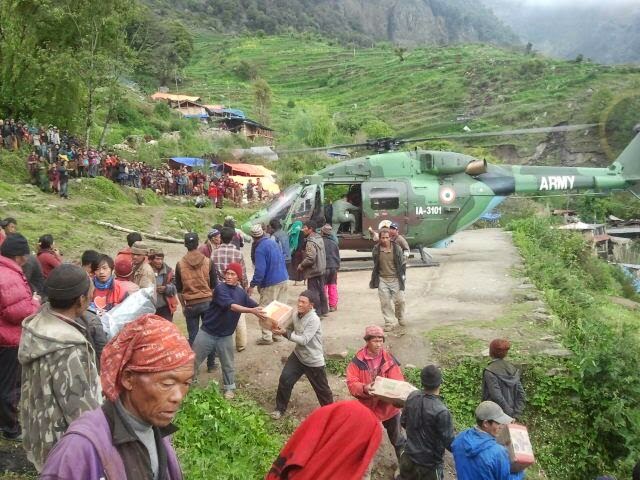 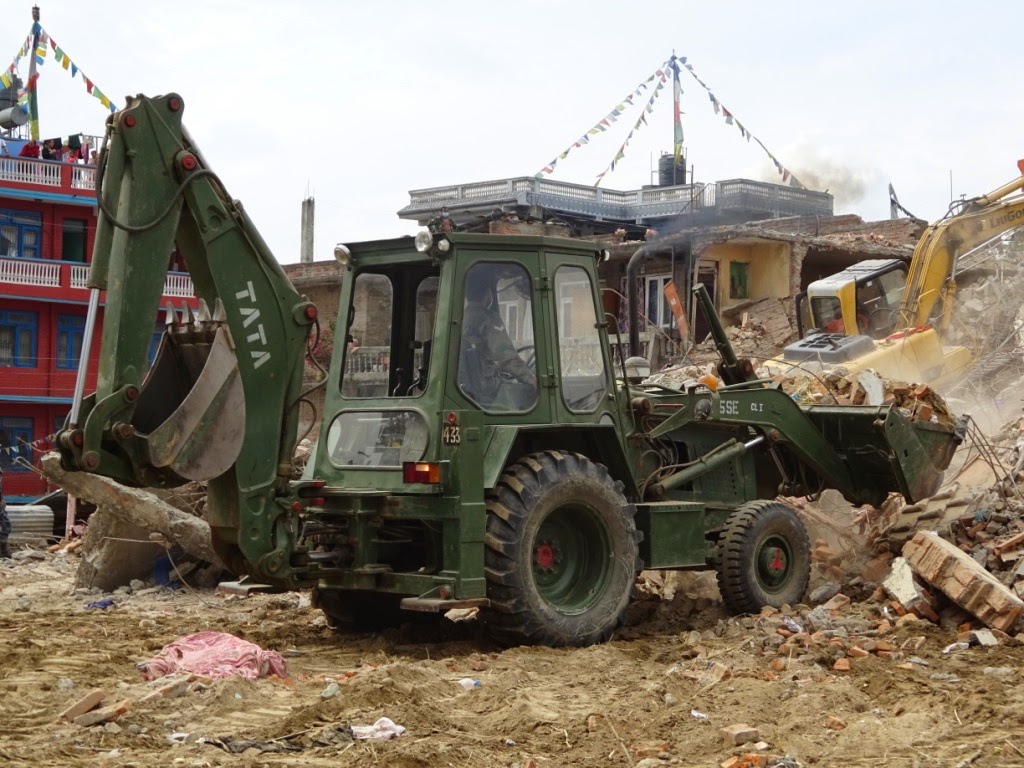 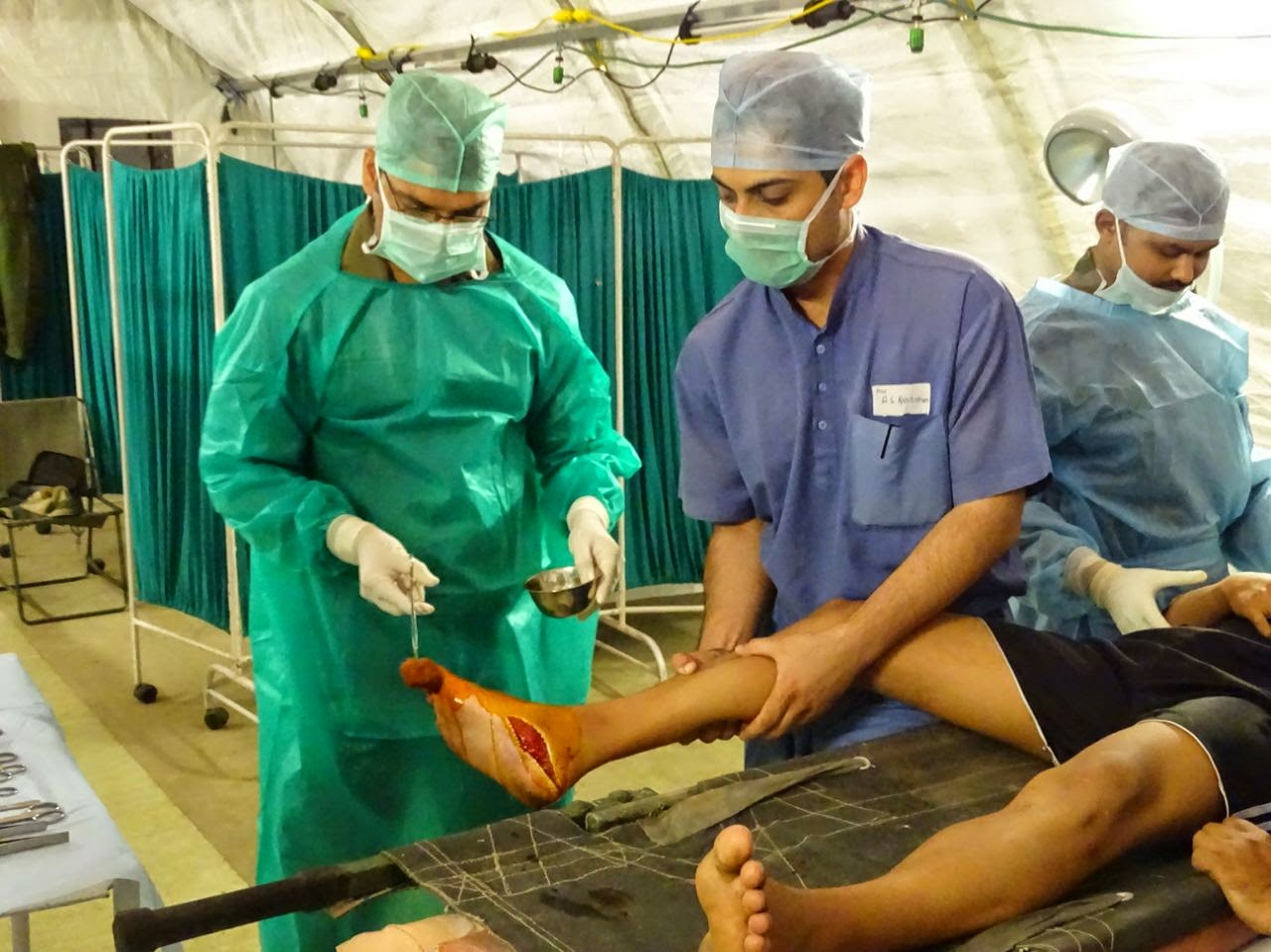 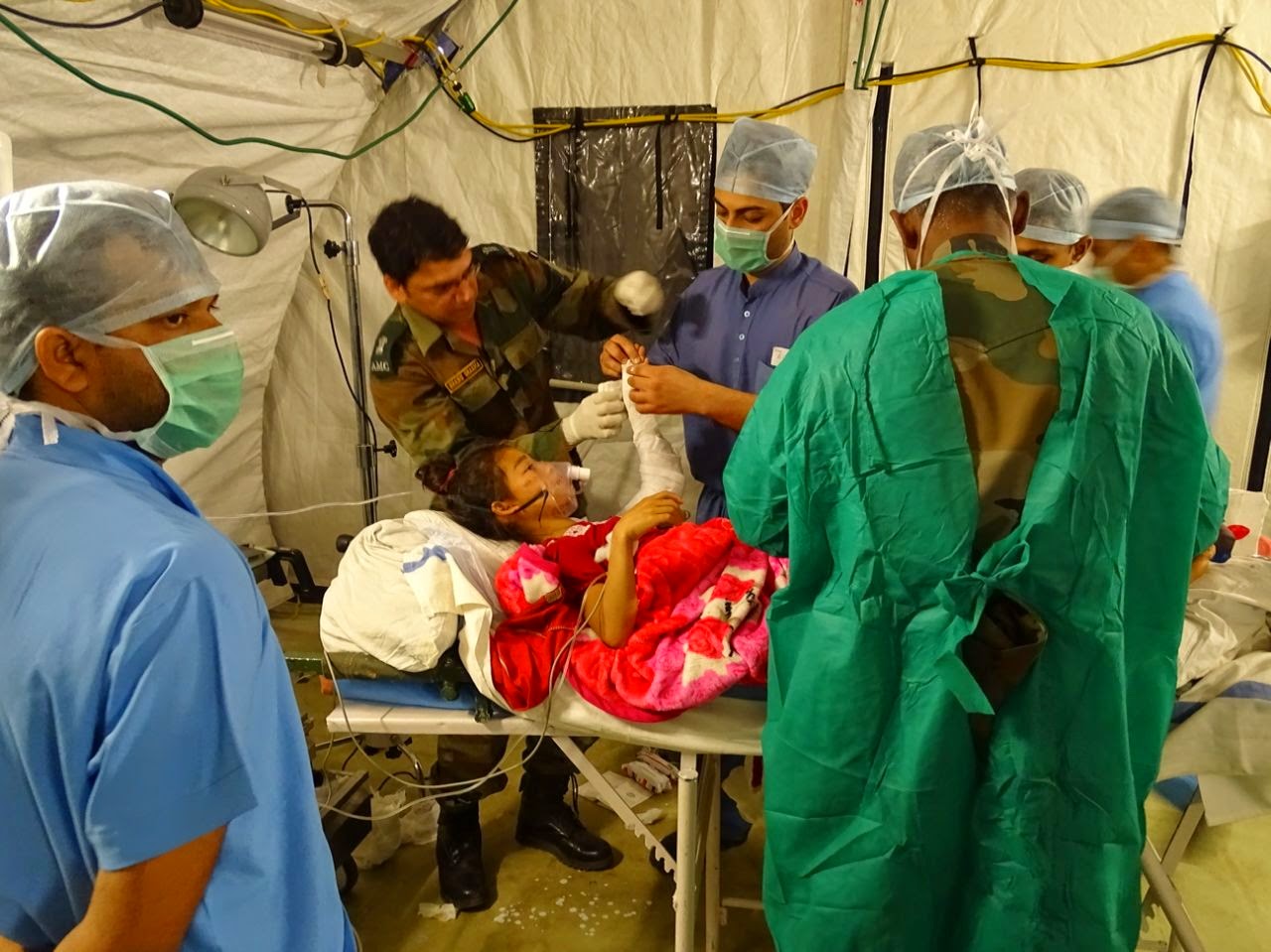 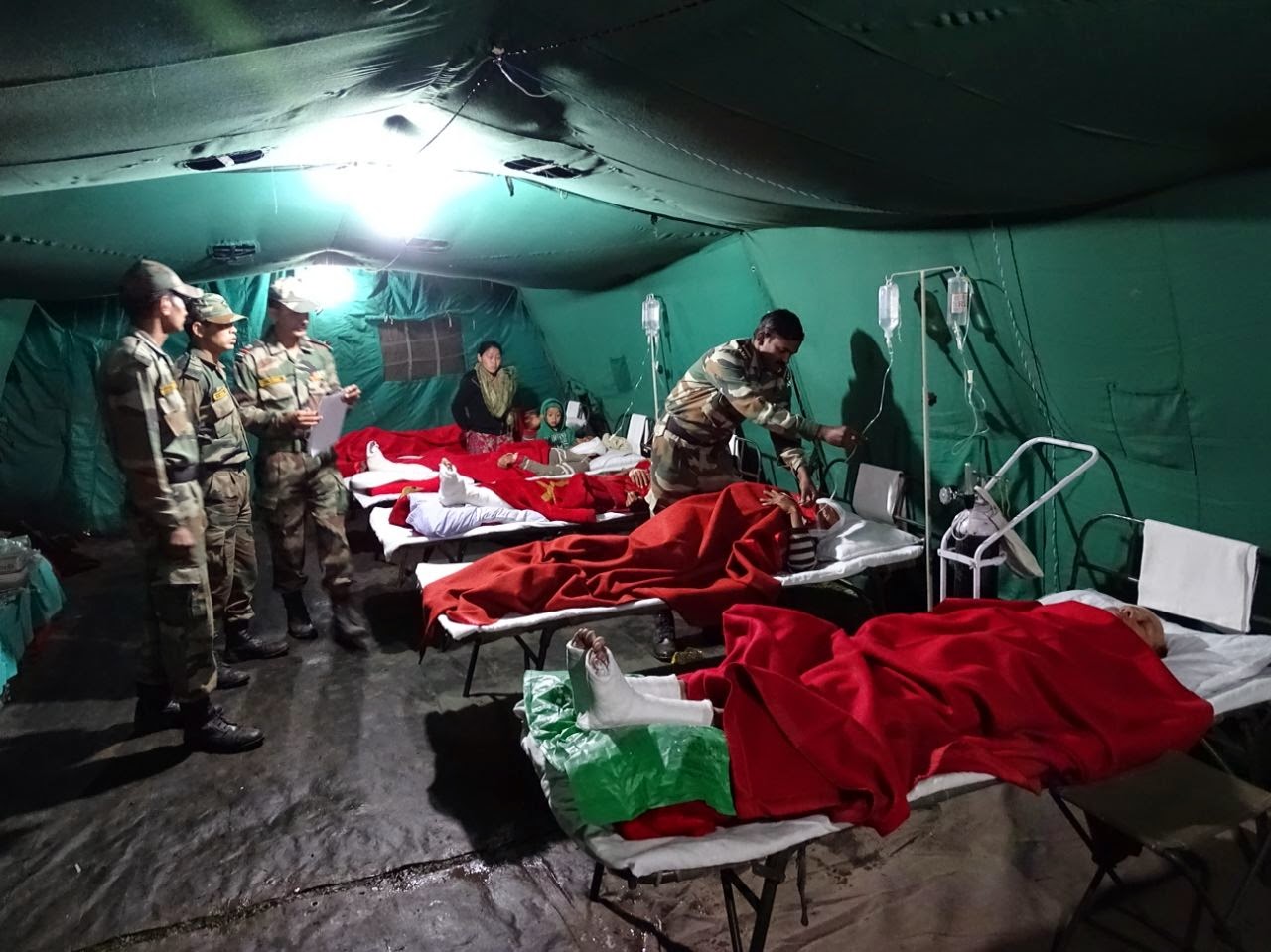 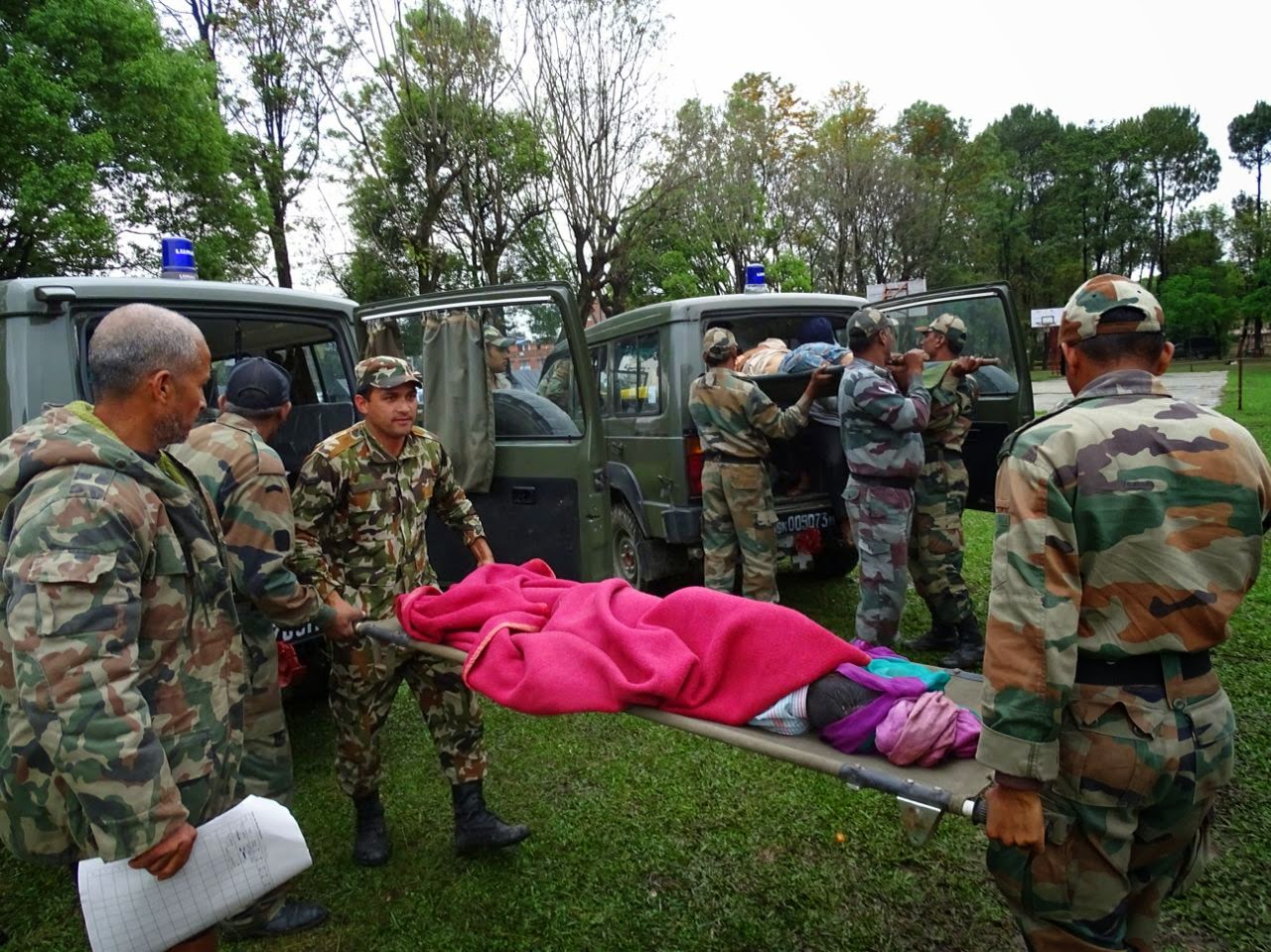 Disaster relief operations in Nepal  by the Army as part of the National response continues.  As part of the ongoing operations, Indian Army Medical Teams, Army Aviation Helicopters and Engineer Task Forces(ETF) reached out to affected population.  The command and control centers at Kathmandu and Pokhara are being augmented by additional officers. Army Relief Convoy moving by road is likely to reach Gorkha  tomorrow.

(a)  Army Aviation Helicopters have carried out Casualty evacuation of 110 people and rescued 120 stranded people on 29 Apr. A total of 49.4  tonnes of relief material has been disbursed on 29 Apr and 15.3 tonnes on 30 Apr, by Army and Air Force Helicopters. One additional ALH was inducted today to Pokhara (total 5 ALH as of date) and two Cheetah helicopters are standby at Gorakhpur.

(b) Three Field Hospitals are providing medical succor to the affected population. Operation Theatre, Lab, x-Ray, Triage Centre and Dental facilities have been activated. Mobile Medical Teams out of these hospitals are located at Barpak,  Rajdalgarh and seven more locations in Gorkha district. A total of 1,740 persons have been provided medical aid till now (210 patients treated including 20 surgeries performed today).

(c)  A total of three ETFs have been inducted into Nepal. The Engineer team at Barpak are opening roads to establish road communication and have also extricated 6 Casualties.  The ETF at Jorbat & Basantpur is involved in clearance of collapsed buildings and debris.

(d)  One Aircraft is being sent with blankets, Tarpaulins, tents and plastic sheets, while another aircraft will carry similar stores to Kathmandu tomorrow.  Vehicle convoy from Kanpur will reach Gorkha tomorrow with 4,950 blankets, 525 tents, 50 tarpaulin and 800 plastic sheets.

Stepping up efforts to help Nepal which was struck by severe earthquakes, the IAF is providing relief to the people in distress  across Nepal including remote and  inaccessible areas.  The details of operations carried out so far are as under :-

Today, critical requirements for Nepal were sent by two transport aircraft, first by an IL-76 which contained utensils, vegetables and a 21 member ‘Langar’  team, tents,  water.  Another C-17 aircraft with 56 tonnes of load containing tents and  water was  sent in the day.  A third transport aircraft i.e, a C-17 is planned to leave in the night, which will carry tents and MRE (Meals Ready to Eat).  Two more aircraft are planned tomorrow  containing a ‘Langar’  team from Punjab Govt. and blankets.

Six IAF Medium Lift Helicopters (MLH) are positioned at Kathmandu.  Two MLHs are positioned at Pokahra.  Helicopter sorties are scheduled to be carried out to Lukla, Dhading, Millanchi and Gorkha today.  The most affected areas where casualty evacuation  were carried in the past few days are Chautara, Charikot, Dhading, Melum, Lukla, Aroghat, Dhunche, Trishuli, Ramchap, Barpak, Narayan Chor, Namchi Bazar and Tatopani.

It would be pertinent to note that transport and helicopter aircraft are being utilised extensively for Human Assistance Disaster Relief (HADR) operations. The Indian Air Force, after proving its mettle in bringing succor to scores of people after Yemen evacuation this month, Jammu & Kashmir in September last year, has once again risen to the occasion and added a pioneering chapter  in Disaster Relief by bringing relief to the needy and evacuate them from earthquake hit areas in Nepal. The Indian Air Force reaffirms its commitment towards Humanitarian Assistance and Disaster Relief Operations in support of the nation.